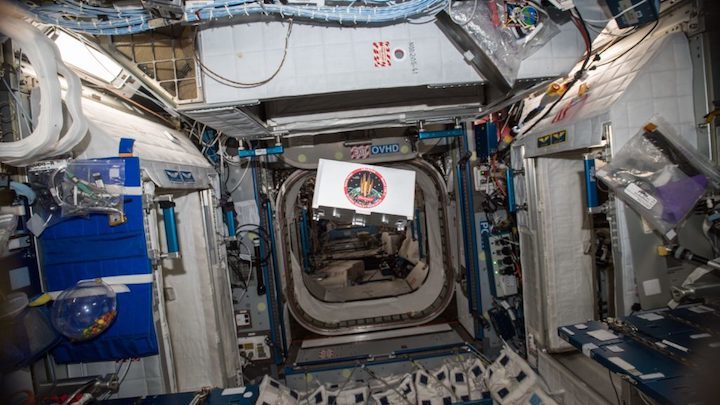 A Space Tango CubeLab, a box that mimics conditions on Earth floats inside the International Space Station before being inserted into a locker.

EXINGTON, Ky. — The test tubes didn’t look much like planet Earth. There were four of them stuck into a white, 3-D printed frame, each one home to a spindly plant sprouting from a dab of lab-made jelly. It was to a garden what Soylent is to confit de canard with fingerling potatoes and mesclun greens.

But once inserted into an aluminum metal box, propelled out of our atmosphere, and plugged into the International Space Station, this arrangement was supposed to mimic everything about our world — except for one important detail.

There would be almost no gravity. A team of biologists and chemists hopes that this alien environment might prod these floral cosmonauts into producing new and improved molecules for drugs.

It’s a tall order, given that pharmaceutical companies largely shifted away from herbs and trees as a fount of new medications decades ago, turning instead to synthetic chemicals. Even Joseph Chappell, whose plant chemistry lab at the University of Kentucky is leading the project, calls it “a harebrained idea.”

But thanks to an alliance with a local Lexington company called Space Tango — which helps researchers and companies set up experiments on the space station — the team is giving it a try.

Space Tango’s headquarters sits in a building that has, in its past lives, served as a hospital and a furniture warehouse. Last week, Twyman Clements, the company’s CEO, stood by some exposed brickwork and listed off some of the creatures he’d already sent space-ward: flatworms, mealworms, fruit flies. In front of him grew food plants that would go into orbit for other clients, and to his right, in a heater sold online for the incubation of lizards, a handful of bees were practicing for the temperature fluctuations of their own otherworldly flight.

“What we don’t want to see is things die,” he said. To prevent that, the team monitors data from its mini, earth-mimicking labs on a wall of screens, and can make adjustments. One of the monitors was, at that moment, showing a live feed of an astronaut carefully maneuvering outside the space station to set up a camera, the blue surface of Earth reflected in its lens.

The idea that such distance from home might revamp our oldest source of remedies for the 21st century is a twist on how we came to use plants as treatments in the first place.

These medicinal molecules are often understood as a plant’s response to stress. To get rid of bothersome bacteria, say, or leaf-munching insects, a plant might make some chemical that interacts with the other creature’s proteins. When dosed right, that compound might also interact with our own inner chemistry to beneficial effect — a deterrent turned treatment, concocted by an assembly line of enzymes. 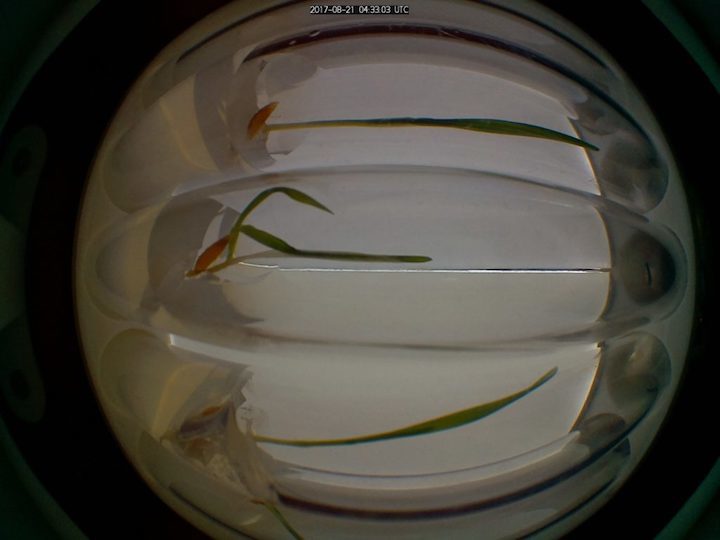 A type of grass, Brachypodium distachyon, growing in a CubeLab aboard the space station.

Change the stress, the team proposes, and the chemical might change, too. That’s what they hope will happen on board the International Space Station.

“There is going to be very little gravity, activating stress responses, but maybe in a way they have never been activated,” said Chase Kempinski, a postdoc in the Chappell lab who also works unpaid as a plant physiology consultant for Space Tango. (The company provides “periodic, unrestricted financial contributions” to the lab and sends its materials into orbit at no cost.)

The scientists wonder whether the new environment will change how genes are expressed, changing the assembly line of enzymes that get called into action and so changing the molecules produced as a result. Kempinski and Chappell point out that when flatworms were cut in two and then sent into space, regenerative biologists saw unique responses when they came back down: One grew two heads, and some responded to light differently than their earthbound counterparts.

Some other researchers aren’t so sure, though.

“The potential contained in any plant species is really a reflection of their history. The way they can produce these remarkable natural products is because, in the history of this species, it must have been very important,” said Jing-Ke Weng, an Massachusetts Institute of Technology biologist whose lab at the Whitehead Institute works on drug development from plant products. “If you put it in an entirely foreign environment, it doesn’t automatically give you new things that cannot be found on Earth.”

And Cathie Martin, a plant natural products researcher at the John Innes Center in Norwich, England, said, “Whether micro-gravity is an appropriate stimulus to release latent or hidden metabolic pathways [in plants] is not at all clear.”

Even if it is, the usefulness of any new compounds would be a total crapshoot. “In general, it’s hard to predict which things are going to improve and which things are going to get worse,” said Michael Levin, a biologist at Tufts University who was involved in sending those flatworms to the space station. “If, the very first time, that made the plants better, I think that would be incredible, but that’s not what we expect from anybody’s first experiments.”

So far, the University of Kentucky team has sent seeds up to hang out in low gravity. The plants they chose were a kind of periwinkle from Madagascar, from which important early cancer-fighting molecules were first isolated, and valerian, an herb with a smelly root that is sometimes taken as a supplement to reduce anxiety.

Those well-traveled seeds have since germinated in a greenhouse, and they look pretty normal from the outside, the periwinkle producing its habitual pink flowers and the valerian its serrated leaves. The chemists suspect that their space travel while in a dormant state won’t have changed their chemistry much. Soon, they’ll grind them up to find out.