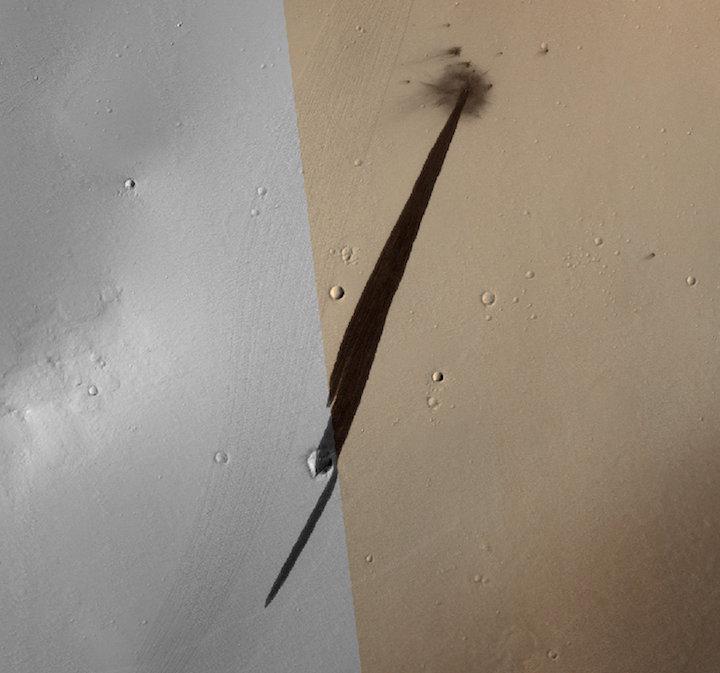 This small meteoroid impact on Mars within the last 10 years created this crater seen by NASA's Mars Reconnaissance Orbiter. The long, dark trail streaking down a slope to the lower left was caused by an avalanche triggered by the impact. NASA released this image on June 15, 2018.

A small space rock crashed into Mars recently, and NASA has captured an amazing view of its crater grave site, as well as the trail from an avalanche triggered by the impact.

The new Mars crater was likely caused by a meteoroid impact within the past 10 years, NASA officials explained in an image description. NASA's Mars Reconnaissance Orbiter (MRO)spotted the crater from orbit, and the agency released the image on June 15.

"The crater itself is only 5 meters [16.5 feet] across, but the streak it started is 1 kilometer long!" NASA officials wrote. "Slope streaks are created when dry dust avalanches leave behind dark swaths on dusty Martian hills. The faded scar of an old avalanche is also visible to the side of the new dark streak."

The impact crater is tiny, but the mark it left, as you can see in the image, is massive. When the meteoroid that caused this crater hit Mars, it destabilized the slope it collided with, which caused an avalanche of Martian dust, dirt and sand. This event left a dark streak, known as a slope streak, across the Martian surface. And as NASA pointed out, you can still see the "scar" from an older avalanche nearby.

Sights like the long, dark streaks on a Martian hill are not uncommon on the surface of the Red Planet. And researchers agree that these dark slope streaks are caused by dust avalanches.

The Martian surface is covered in sand, dirt and dust granules, and the planet is known to have storms and be struck by meteoroids. (A meteoroid is a small rock in space. When it enters an atmosphere and flares up, it is known as a meteor. Any fragments that reach the surface are called meteorites.)

However, for years, scientists have pondered the origins of these marks. Previously, researchers suggested that these dark streaks could be caused by transient, flowing briny water, perhaps indicating that Mars is habitable, as many have suspected over time. Researchers thought that subterranean water could have been rising to the surface and causing the dark streaks. This theory was supported when MRO detected hydrated salts in these streaks. Some even suggested that the streaks were caused by seasonal carbon-dioxide frost. However, a study published last spring in the journal Nature Geoscience points to avalanches as the leading cause of the streaks.

MRO took this spectacular new impact-crater image using HiRISE, or High Resolution Imaging Science Experiment, which was built by Ball Aerospace & Technologies Corp., of Boulder, Colorado,and is operated by the University of Arizona. HiRISE has taken some of the most spectacular and detailed images of the Martian surface to date.

NASA's MRO spacecraft launched to Mars in August 2005 and arrived in early 2006. It has been studying the Red Planet from orbit ever since.