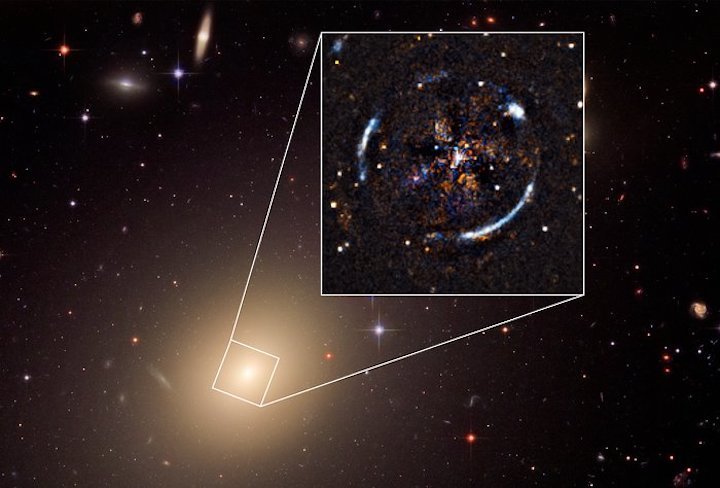 Astronomers using the MUSE instrument on ESO’s Very Large Telescope in Chile, and the NASA/ESA Hubble Space Telescope, have made the most precise test yet of Einstein’s general theory of relativity outside the Milky Way. The nearby galaxy ESO 325-G004 acts as a strong gravitational lens, distorting light from a distant galaxy behind it to create an Einstein ring around its centre. By comparing the mass of ESO 325-G004 with the curvature of space around it, the astronomers found that gravity on these astronomical length-scales behaves as predicted by general relativity. This rules out some alternative theories of gravity.

Using the MUSE instrument on ESO’s VLT, a team led by Thomas Collett from the University of Portsmouth in the UK first calculated the mass of ESO 325-G004 by measuring the movement of stars within this nearby elliptical galaxy.

Collett explains “We used data from the Very Large Telescope in Chile to measure how fast the stars were moving in ESO 325-G004 — this allowed us to infer how much mass there must be in the galaxy to hold these stars in orbit.”

But the team was also able to measure another aspect of gravity. Using the NASA/ESA Hubble Space Telescope, they observed an Einstein ring resulting from light from a distant galaxy being distorted by the intervening ESO 325-G004. Observing the ring allowed the astronomers to measure how light, and therefore spacetime, is being distorted by the huge mass of ESO 325-G004.

Einstein’s general theory of relativity predicts that objects deform spacetime around them, causing any light that passes by to be deflected. This results in a phenomenon known as gravitational lensing. This effect is only noticeable for very massive objects. A few hundred strong gravitational lenses are known, but most are too distant to precisely measure their mass. However, the galaxy ESO 325-G004 is one of the closest lenses, at just 450 million light-years from Earth.

Collett continues “We know the mass of the foreground galaxy from MUSE and we measured the amount of gravitational lensing we see from Hubble. We then compared these two ways to measure the strength of gravity — and the result was just what general relativity predicts, with an uncertainty of only 9 percent. This is the most precise test of general relativity outside the Milky Way to date. And this using just one galaxy!”

General relativity has been tested with exquisite accuracy on Solar System scales, and the motions of stars around the black hole at the centre of the Milky Way are under detailed study, but previously there had been no precise tests on larger astronomical scales. Testing the long range properties of gravity is vital to validate our current cosmological model.

These findings may have important implications for models of gravity alternative to general relativity. These alternative theories predict that the effects of gravity on the curvature of spacetime are “scale dependent”. This means that gravity should behave differently across astronomical length-scales from the way it behaves on the smaller scales of the Solar System. Collett and his team found that this is unlikely to be true unless these differences only occur on length scales larger than 6000 light-years.

“The Universe is an amazing place providing such lenses which we can use as our laboratories,” adds team member Bob Nichol, from the University of Portsmouth. “It is so satisfying to use the best telescopes in the world to challenge Einstein, only to find out how right he was.” 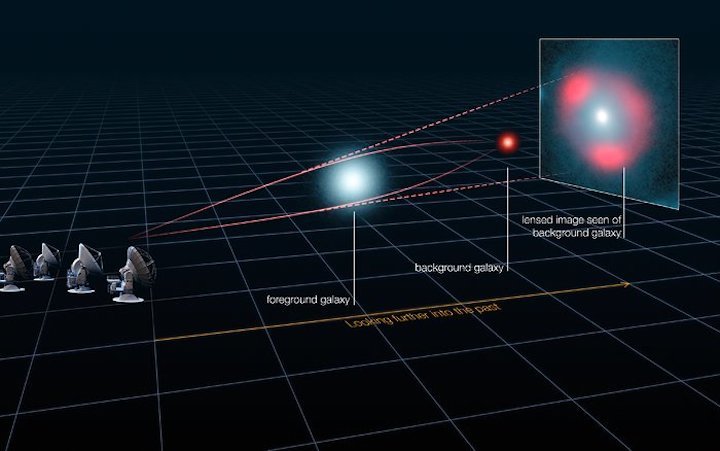 This schematic image represents how light from a distant galaxy is distorted by the gravitational effects of a nearer foreground galaxy, which acts like a lens and makes the distant source appear distorted, but brighter, forming characteristic rings of light, known as Einstein rings. An analysis of the distortion has revealed that some of the distant star-forming galaxies are as bright as 40 trillion Suns, and have been magnified by the gravitational lens by up to 22 times.

Two methods of measuring the mass of a galaxy 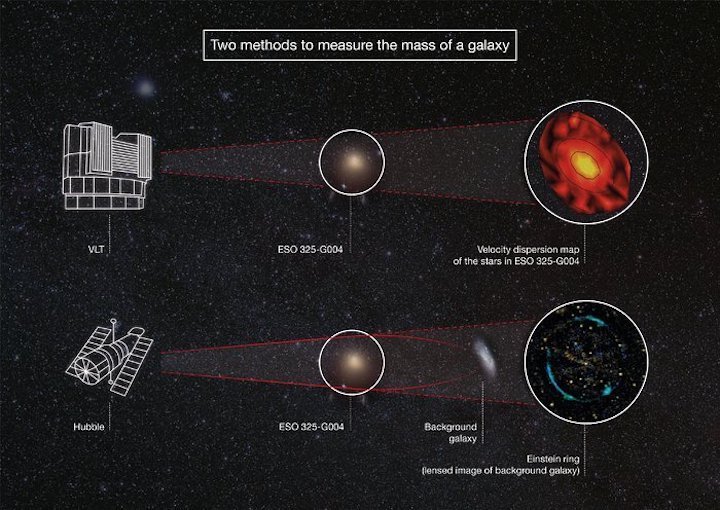 This infographic compares the two methods used to measure the mass of the galaxy ESO 325-G004. The first method used the Very Large Telescope to measure the velocities of stars in ESO 325-G004. The second method used the Hubble Space Telescope to observe an Einstein ring caused by light from a background galaxy being bent and distorted by ESO 325-G004. By comparing these two methods of measuring the strength of the gravity of ESO 325-G004, it was determined that Einstein’s general theory of relativity works on extragalactic scales — something that had not been previously tested. 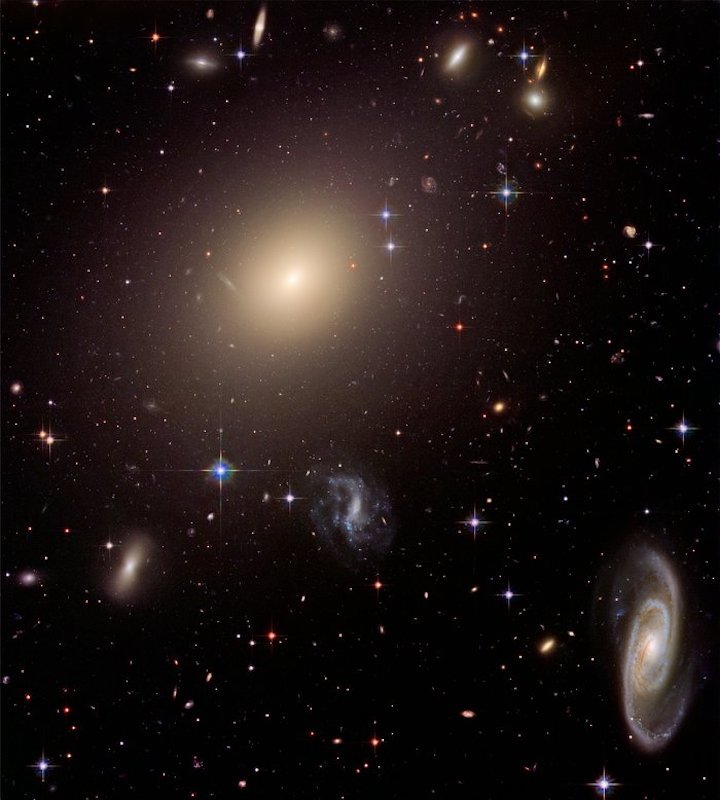 This image from the NASA/ESA Hubble Space Telescope shows the diverse collection of galaxies in the cluster Abell S0740 that is over 450 million light-years away in the direction of the constellation Centaurus. The giant elliptical ESO 325-G004 looms large at the cluster's centre. Hubble resolves thousands of globular star clusters orbiting ESO 325-G004. Globular clusters are compact groups of hundreds of thousands of stars that are gravitationally bound together. At the galaxy's distance they appear as pinpoints of light contained within the diffuse halo. This image was created by combining Hubble science observations taken in January 2005 with Hubble Heritage observations taken a year later to form a 3-colour composite. The filters that isolate blue, red and infrared light were used with the Advanced Camera for Surveys aboard Hubble.