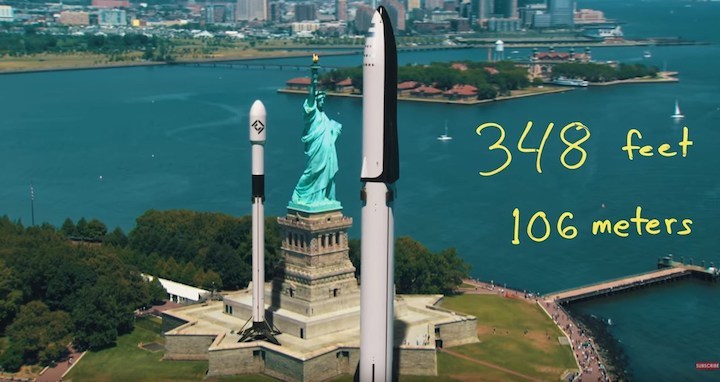 A still from a Corridor Crew video shows the relative sizes of SpaceX rockets and the Statue of Liberty.

We all know rockets are big, but a fun new video that SpaceX CEO Elon Musk called “cool” shows just how big.

Who knew the Falcon 9 rocket is as tall as a 21-story building? Or that each of the three Falcon 9 boosters that make up the company's Falcon Heavy rocket is 12 feet in diameter?

And how about the company's planned 348-foot-tall BFR rocket, which will tower over the Statue of Liberty and be as wide as a London bus is long?

And these king-sized rockets may be just the beginning.

“As big as these rockets are, we may see rockets that are even larger,” says the video’s host, Wren Weichman. “I mean, the BFR is still not as large as the Saturn V rocket which took us to the moon — and we built that 50 years ago.”

No matter what, we’ve come a long way since the Mercury-Redstone rocket that lofted the first American astronaut, Alan Shepard, into space back in 1961. That rocket stood only 82 feet tall.