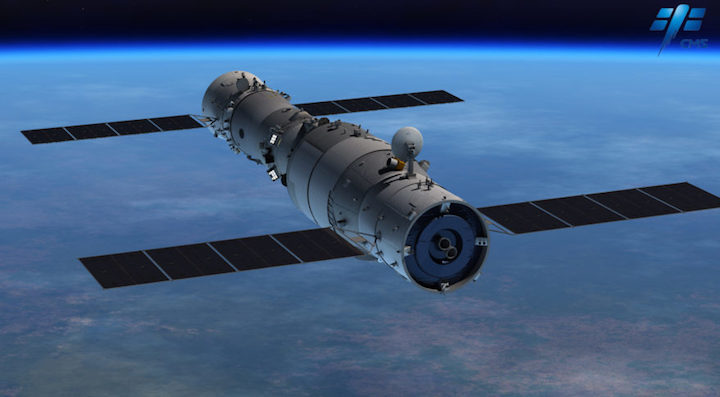 China has lowered the orbit of its Tiangong-2 space lab, likely in preparation for deorbiting the orbital facility and thus averting a similar scenario to the uncontrolled re-entry of Tiangong-1 earlier this year.

Tiangong-2 was launched in September 2016 to test advanced life support and refueling and resupply capabilities via the crewed Shenzhou-11 and uncrewed Tianzhou-1 cargo missions, in preparation for constructing a large, modular space station in low Earth orbit.

Orbital information published by the U.S. Strategic Command’s Joint Force Space Component Command, through the Joint Space Operations Center, indicates that Tiangong-2 has moved from an altitude of around 380 by 386 kilometers down to 292 by 297 kilometers.

No announcement regarding the status of the Tiangong-2 space lab has been made. The China Manned Space Engineering Office (CMSE), which manages China’s human spaceflight and space station related missions, did not respond to a SpaceNews request for comment.

Jonathan McDowell, an astrophysicist at the Harvard-Smithsonian Center for Astrophysics, told SpaceNews that, “it seems likely that the lowering of Tiangong-2’s orbit is the first step in safely disposing of it.”

McDowell says the orbit of Tiangong-2 was most likely lowered through two burns early June 13.

Tiangong-2 is a more advanced version of the Tiangong-1 space lab launched in 2011. Both were designed as stepping stones for developing and verifying technologies for larger 20-metric-ton modules for the planned Chinese Space Station, a long-term ambition laid out in 1992.

Phil Clark, a long-time observer of China’s space activities and author of numerous articles for the Journal of the British Interplanetary Society, has been tracking Tiangong-2’s orbit since launch. He noted a recent relative absence of burns to raise its orbit, which has been followed by last week’s activity.

Tiangong-1 suffered an anomaly in early 2016, apparently ending contact with the ground. Atmospheric drag saw the spacecraft’s orbit gradually decay, with a high-profile uncontrolled re-entry eventually occurring April 2. Most of the space lab burned up, with remaining debris landing in the Pacific Ocean.

Clark adds that the missions have already demonstrated that Tiangong modules and Tianzhou cargo can operate in orbit for requisite periods of time.

There is currently no indication of what the next move will be or when it could come.

From Tiangong to space station

The 8.6-metric-ton Tiangong-2 spacecraft is 10.4 meters long with a maximum width of 3.35 meters. In late 2016 Tiangong-2 docked with Shenzhou-11 and hosted two astronauts for 30 days in what was China’s longest human spaceflight mission so far.

It was visited by the Tianzhou-1 cargo spacecraft in 2017 to test and verify refuelling capabilities in microgravity — a capability crucial to China’s plans to maintain a future space station in low Earth orbit.

It also carried a range of science payloads. POLAR, a gamma-ray burst detector developed by an international collaboration including Swiss, Chinese and Polish institutes, stopped functioning fully  April 1, 2017 due to power failure. According to principal investigator Nicolas Produit, the  astroparticle experiment collected excellent data during six months of operations, with science results to be published shortly.

China is aiming to launch the first module of the space station proper, named Tianhe, around 2020. This mission first requires the nominal return-to-flight of the heavy lift Long March 5 launch vehicle late this year after a failure last July, followed by a successful debut of the Long March 5B, a variant used for low Earth orbit launches, in mid-2019.

The 60-100-metric-ton Chinese Space Station is expected to be completed with the addition of two experiment modules around 2022 and will be capable of hosting three astronauts for long durations and up to six during crew turnover. It will be joined by a co-orbiting Hubble-class space telescope that can dock for propellant supply, maintenance and repairs.