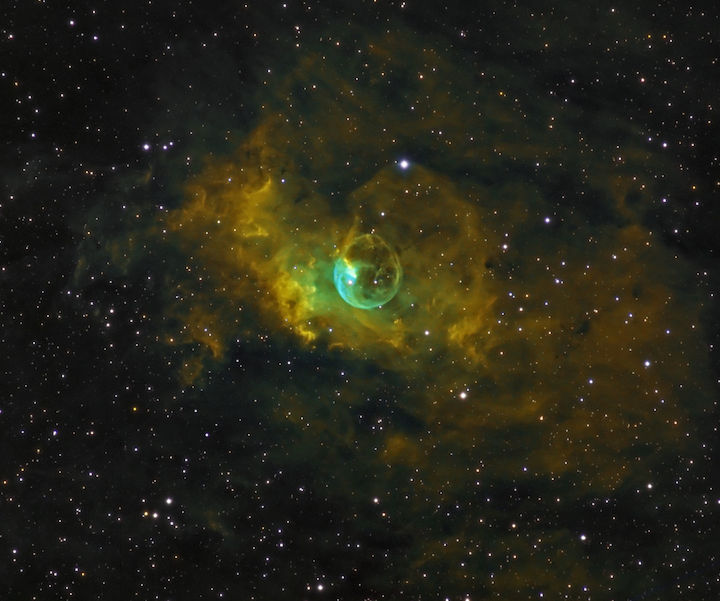 Jaspal Chadha took the image from his backyard in London in April 2015.

he vivid colors of the Bubble Nebula shine in this green and yellow image.

Jaspal Chadha took the image from his backyard in London in April 2015 and recently shared it with Space.com. To take the image Chadha used a Takahashi 130 telescope, with a qsi 690 ccd camera on a ioptron cem60 mount. In 2015, Chadha also shared this different view of the Bubble Nebulathat was just as amazing.

"I took careful planning with the weather to maximum the use of clear sky and knew from imaging the target in the past that hydrogen was the most effective to bring out the detail," Chadha wrote in an email to Space.com.

Approximately 6 light-years wide, the bubble nebula, also called NGC 7635, is located roughly 7,100 light-years from Earth in the constellation Cassiopeia. A light-year is the distance light travels in one year, or about 6 trillion miles (10 trillion kilometers).

The bubble was created by fierce stellar winds and intense radiation from a nearby star, which likely has a mass 10 to 20 times that of the sun. The process blasted out material to form the bubble structure of glowing gas against denser material in a surrounding molecular cloud. The cloud contains the expansion of the Bubble Nebula while itself being excited by the hot central star, causing it to glow.

Chadha took his frames to create the composite image using three different filters to capture gases that convert to colors the eye can see. The final image depicts red light from hydrogen atoms as green, red light from sulfur ions (sulfur atoms with one electron removed) as red, and green light from doubly-ionized oxygen (oxygen atoms with two electrons missing) as blue. These color reassignments enhance the level of detail visible in the image, which makes the light from different gases easier to see and creates the vivid image.