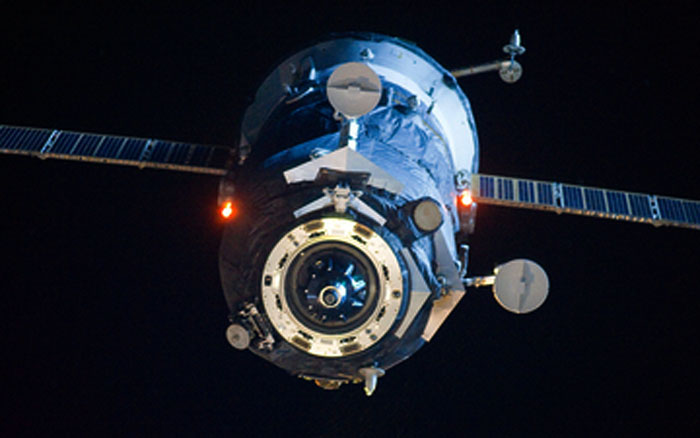 The Progress 57 resupply ship will launch at 3:09 a.m. Oct. 29 from the Baikonur Cosmodrome in Kazakhstan (1:09 p.m. Baikonur time), with almost three tons of food, fuel and supplies for the station's Expedition 41 crew. Launch coverage begins at 2:45 a.m. Progress 57 will make its four-orbit, six-hour trip to the space station and dock at 9:09 a.m. Docking coverage will begin at 8:30 a.m.

Space freighter Progress M-25M continues its autonomous flight to the International Space Station, all onboard systems operate well, Russian space agency Roscosmos says
Space freighter Progress M-25M has separated from the third stage of rocket Soyuz-2.1a and continued its autonomous flight to the International Space Station (ISS) on Wednesday. The cargo spacecraft is to dock with the ISS already in six hours at 4.09pm Moscow time (12.09 GMT).
“Progress M-25M has separated from the rocket at 10.18am Moscow time (6.18am GMT). The freighter’s flight is passing as scheduled, all onboard systems operate well,” Russian space agency Roscosmos told TASS.
Progress will deliver to the orbital station more than 2.5 tons of cargo, including fuel for ISS orbit adjustments, foodstuffs, drinking water and packed air for ISS crew, research equipment and devices for ISS operation.
This is the first launch of the space freighter by rocket Soyuz-2.1a, as cargo spacecraft were earlier brought to the ISS only by boosters Soyuz-U. This launch started flight tests of a space delivery system in a new makeup of space freighter Progress and rocket Soyuz-2.1a. This space program plans another three launches, including two in 2015 and one in 2016. After flight tests, launches of piloted spaceships Soyuz with spacemen on board will be also made by rocket Soyuz-2.1a. Now only rockets Soyuz-FG, a modification of launch vehicle Soyuz-U, deliver manned spaceships on the orbit.
The National Aeronautics and Space Administration (NASA) has failed earlier in the day to deliver cargoes to the ISS after space freighter Cygnus launched from the Wallops Island launch facility, Virginia, at 9.23pm GMT on Tuesday (01.23am Moscow time on Wednesday) exploded together with Antares carrier rocket.
Quelle: TASS
. 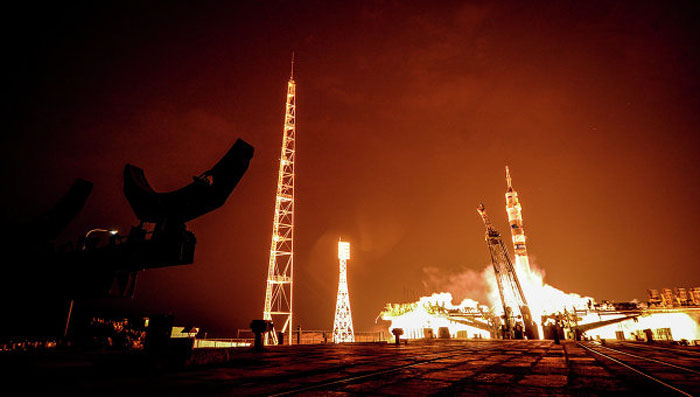 Russia has launched a Progress M-25M on a Soyuz-2.1a carrier rocket from the Baikonur Space Center to the International Space Station (ISS), a spokesman for the Central Command said Wednesday.
“The Progress M-25M will dock with the International Space Station at 4:09 p.m. Moscow time [13:09 GMT] on the Pirs dock on the Russian segment of the ISS,” the spokesman said.
The Progress is carrying fuel, air, oxygen, food, and equipment for scientific experiments, as well as letters for the US and Russian crews.
Quelle: RiaNovosti
.

Nine hours after a spectacular launch failure that destroyed a U.S. supply ship bound for the International Space Station, the Russians successfully launched a Progress cargo craft from snowy Kazakhstan Wednesday carrying 5,793 pounds of rocket fuel, water, air, crew supplies and other equipment needed aboard the lab complex.
The Progress M-25M/57P spacecraft, mounted atop an upgraded Soyuz-2.1a rocket making its first flight, blasted off from the Baikonur Cosmodrome in Kazakhstan at 3:09:43 a.m. EDT (1:09 p.m. local time) and quickly climbed away through a cloudless blue sky on an easterly trajectory setting up a six-hour four-orbit rendezvous with the space station. 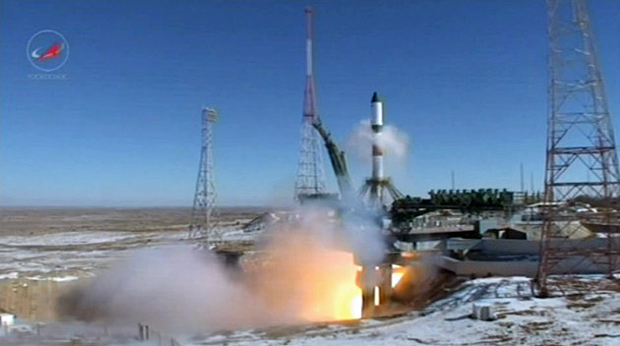 A Russian Soyuz booster carrying a Progress cargo ship roared to life and took off from the Baikonur Cosmodrome in Kazakhstan Wednesday, kicking off a six-hour flight to the International Space Station. (Credit: NASA)
.
The Soyuz booster, taking off from the same pad used by cosmonaut Yuri Gagarin at the dawn of the space age, featured a new digital flight computer and followed a slightly different trajectory, according to RussianSpaceWeb.com, allowing the Progress cargo ship to carry about 660 pounds of additional cargo compared to earlier versions of the rocket.
The ascent appeared to go smoothly and roughly nine minutes after liftoff, the Progress was released to fly on its own. A few moments after that, its two solar panels and navigation antennas deployed as planned.
"We have a healthy cargo ship en route to the International Space Station," said NASA launch commentator Rob Navias.
If all goes well, the spacecraft will execute an autonomous rendezvous with the International Space Station, gliding to a docking at the Pirs module around 9:09 a.m.
"The crew feels wonderful, and we're ready for the timelined activities," Expedition 41 commander Maxim Suraev radioed flight controllers in Moscow during a morning planning conference. "So, how's that Progress doing?"
"Good morning, everybody, this is Moscow," a flight controller repllied. "The Progess is doing splendid. ... All the systems are preforming nominal, the antennas are deployed, and so all we've got to do is wait, because it's coming your way today."
"That's a good thing," Suraev said.
The Progress and its cargo will be a welcome addition for the station's six-member crew. The spacecraft is loaded with 1,940 pounds of propellant, much of it reserved for space station orbit adjustment maneuvers, 926 pounds of water, 105 pounds of oxygen and air and 2,822 pounds of dry cargo.
. 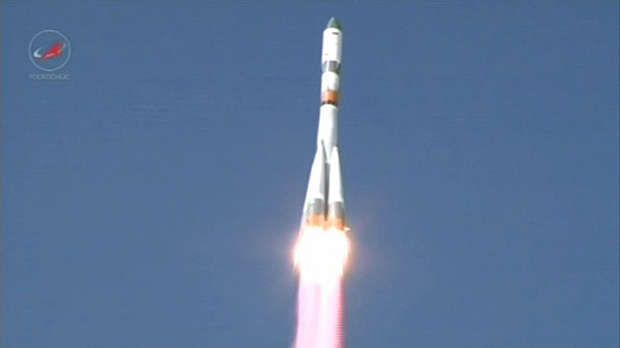 The Soyuz booster smoothy accelerates as it climbs away through a clear blue sky. (Credit: NASA)
While the Progress was closing in on the space station, ground crews at the Mid-Atlantic Regional Spaceport at Wallops Island, Va., expected to be getting their first good look at the havoc caused by the dramatic failure of an Orbital Sciences Antares rocket that exploded Tuesday evening seconds after launch. Destroyed in the mishap was a commercial Cygnus cargo ship loaded with some 5,050 pounds of supplies, experiment hardware and other equipment.
It is not yet known what caused the dramatic failure. It was the first in five flights by an Antares and the first station program launch failure since a Progress was destroyed after a third stage malfunction in August 2011 that sent 2.9 tons of space station supplies and equipment crashing back to Earth.
Despite the Antares failure, NASA officials say the space station is flush with supplies, enough to keep the crew operating for several months even if no more resupply flights were launched.
"We manage the station to protect for just such an event should it occur," Mike Suffredini, NASA's space station program manager, told reporters late Tuesday. "We keep logistics on board the ISS to protect us for about four to six months in the event other logistics vehicles can't make it to ISS. So in fact, our logistics on board today, if no other spacecraft showed up, takes us well into next year. So from a consumables standpoint, we're in good shape."
Cargo aboard the Progress and a SpaceX Dragon cargo ship scheduled for launch Dec. 9 will boost those reserves even more.
Quelle: CBS