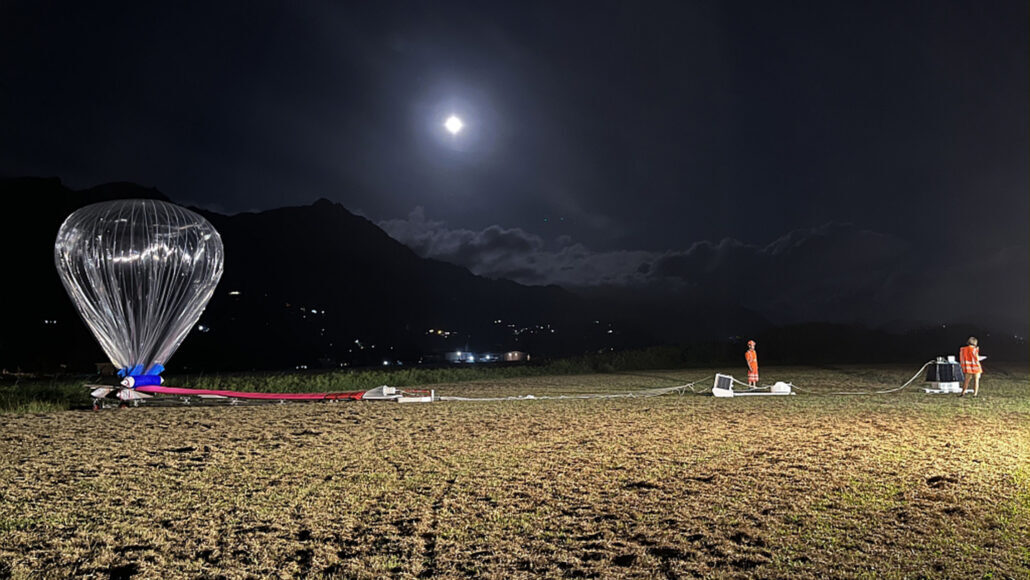 A scientific balloon is inflated before liftoff in the Seychelles in 2021. These floating labs could one day be used to study quakes and other aspects of Venus’ geology.

The balloon was floating over the Pacific Ocean when the first sound waves hit. For 11 seconds, a tiny device dangling beneath the large, transparent balloon recorded sudden, jerky fluctuations in air pressure: echoes of an earthquake more than 2,800 kilometers away.

That scientific instrument was one of four hovering high above the Malay Archipelago on December 14, 2021. That day the quartet became the first network of devices to monitor an earthquake from the air, researchers report in the Aug. 16 Geophysical Research Letters.

The finding could help scientists track earthquakes in remote areas on Earth, and also opens the door to one day sending specially equipped balloons to study the geology of other worlds, including our closest planetary neighbor.

“Venus is the sister planet of Earth, but it’s the evil twin sister,” says David Mimoun, a planetary scientist at the University of Toulouse in France. “We don’t know why the two planets are so different. That’s why we need measurements.”

The idea of using balloons to study far-off rumblings on Earth has its roots in the Cold War. In the 1940s, the U.S. military launched a top secret project to spy on Soviet nuclear weapons testing using microphones attached to balloons floating high in the atmosphere. When the ground shakes, it releases low-frequency sound waves that can travel long distances in the atmosphere. The military planned on using the microphones to pick up on the sound of the ground shaking from a nuclear explosion. But the project was eventually deemed too expensive and dropped — though not before one of the balloons crashed in New Mexico, launching the Roswell conspiracy.

For decades after, balloon science stayed mostly in the realm of meteorology. Then in the early 2000s, Mimoun and his colleagues started experimenting with using balloons for space exploration, specifically for studying extraterrestrial quakes.

Analyzing temblors is one of the main ways that scientists can learn about a planet’s interior. On worlds with thin atmospheres, such as Mars or Earth’s moon, this generally means sending a lander to the surface and measuring quakes directly on the ground (SN: 5/13/22).

But doing that on Venus isn’t really an option. The dense atmosphere means that the planet’s surface has about the same pressure as Earth’s deep ocean, with temperatures averaging around 450° Celsius — hot enough to melt lead. “Basically, it’s hell,” Mimoun says.

Landers have made it to the surface of Venus before (SN: 6/19/76). But these probes lasted only a few hours before succumbing to the extreme heat and pressure. The chances of measuring a quake in that short time frame are slim, says Siddharth Krishnamoorthy, a research technologist at NASA’s Jet Propulsion Laboratory in Pasadena, Calif., who wasn’t involved in the study. So while radar images of Venus have revealed a world dotted with volcanoes, scientists still don’t know for sure if Venus is geologically active, he says.

Scientists have previously experimented with the idea of detecting quakes on Venus using orbiters (SN: 9/02/05). But quake-detecting balloons have better resolution, says Mimoun, meaning they could provide the key to revealing the planet’s interior life. But first Mimoun and his colleagues had to show that they could design devices small enough to be carried by balloons but sensitive enough to pick up earthquakes far below.

In 2021, the team attached micro-barometers to 16 balloons launched from the Seychelles Islands, off the coast of East Africa. In December, four balloons — having drifted thousands of kilometers apart — recorded similar, low-frequency sound waves. These changes in air pressure resembled ground readings of a 7.3 magnitude earthquake near the Indonesian island of Flores, indicating that the sound waves were produced by the earthquake. The researchers were able to use the changes in air pressure to pinpoint the epicenter of the quake and calculate its magnitude.

On December 14, 2021, a 7.3 magnitude earthquake originated in Indonesia’s Flores Sea. High in the atmosphere, four balloons with barometers detected changes in air pressure that resembled ground readings of the quake. The quartet is the first network of devices to monitor an earthquake from the air.

Locations of the earthquake, seismometers and 4 balloons

“This is a huge step forward in demonstrating the utility of this technology,” says Paul Byrne, a planetary scientist at Washington University in St. Louis, who was not involved with the study.

Even without being able to pick up quakes, the balloons, if designed to survive in the Venusian atmosphere, might be able to detect changes in air pressure that reveal clues about the planet’s volcanic eruptions and mysterious highlands, Byrne says.

Venus is entering a renaissance of interest from space agencies. At least two NASA missions to visit the planet are planned for the end of this decade (SN: 6/2/21). Mimoun is hoping that earthquake-detecting balloons will feature in the next major mission, emphasizing that their data could help researchers understand why Earth and Venus — alike in size and distance from the sun, relative to the other planets — have gone down such different paths.