The bright light from the full moon will drastically reduce the number of visible meteors this year. 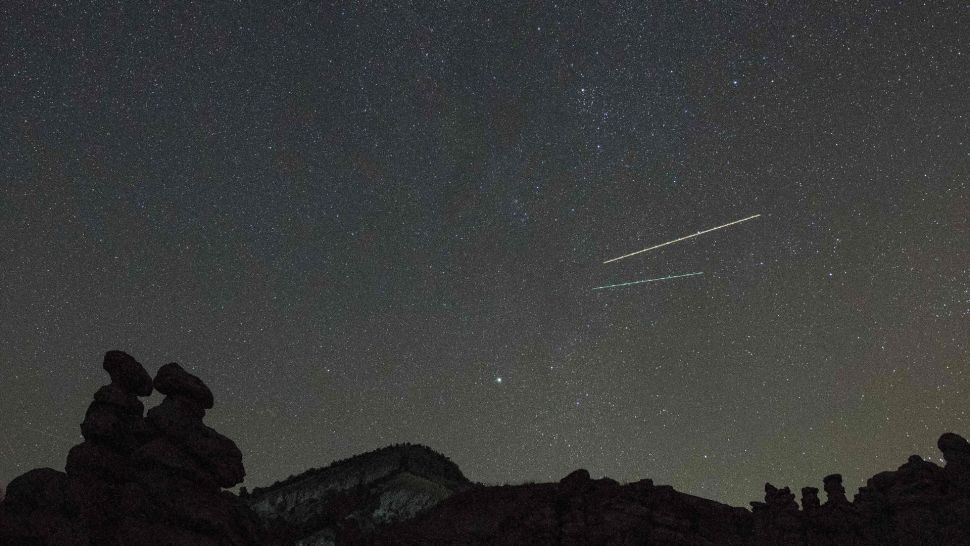 Perseid meteorites streak over the stone dools near the village of Kuklica in the municipality of Kratovo, Northern Macedonia, an area of naturally formed stone pillars that resemble humans, on August 13, 2021. (Image credit: ROBERT ATANASOVSKI/AFP via Getty Images)

The peak of the annual Perseid meteor shower shares the sky with August’s full moon this week, meaning it will be difficult to view the iconic shooting stars.

The Perseid meteor shower (also known as the Perseids) is one of the strongest meteor showers, occurring annually between July 14 and Sept. 1. This year, the shower will reach its peak on Aug. 12 and 13, according to the American Meteor Society (AMS)(opens in new tab).

Meanwhile, the August full moon, also known as the Sturgeon Moon, will reach its peak on Aug. 11 at 9:35 p.m. EDT (0101 GMT) and will appear nearly full the night before and the night after. This month's full moon also happens to be 2022's last supermoon, which occurs when the moon makes its closest approach to Earth at the same time that it's full, making it appear especially large and bright in the night sky.

Most years, under better viewing conditions — without clouds and a full moon— viewers can expect to see between 50 and 100 visible meteors, or "shooting stars," per hour at the shower's peak. This year, however, the bright light from the full moon will drastically reduce the number of visible meteors to between 10 and 20 per hour, at best, according to a statement(opens in new tab) from NASA astronomer Bill Cooke.

The Perseids are caused by Earth passing through the bits of ice and rock left behind by Comet Swift-Tuttle, which last passed close to Earth in 1992. The Perseids peak when Earth passes through the densest and dustiest area of the comet's trail.

Given the competing full moon, the Virtual Telescope Project plans to host a Perseids webcast today(opens in new tab) (Aug. 9), offering viewers a chance to see some meteors before the moon reaches peak brightness. The webcast will begin at 9 p.m. EDT (0100 GMT Aug. 10) and showcase any meteors captured by the telescopes' wide-field cameras.

As the full moon subsides, viewers may still have a chance to see some Perseids before they disappear at the end of the month. The best time to look for meteors is between midnight and dawn when the moon is below the horizon. Find a viewing area away from any artificial light and give your eyes plenty of time (20 minutes or so) to adjust to the darkness.

This year offers a few other opportunities to catch a meteor shower. Check out our guide for details on when the next meteor showers will occur and how you can view them.