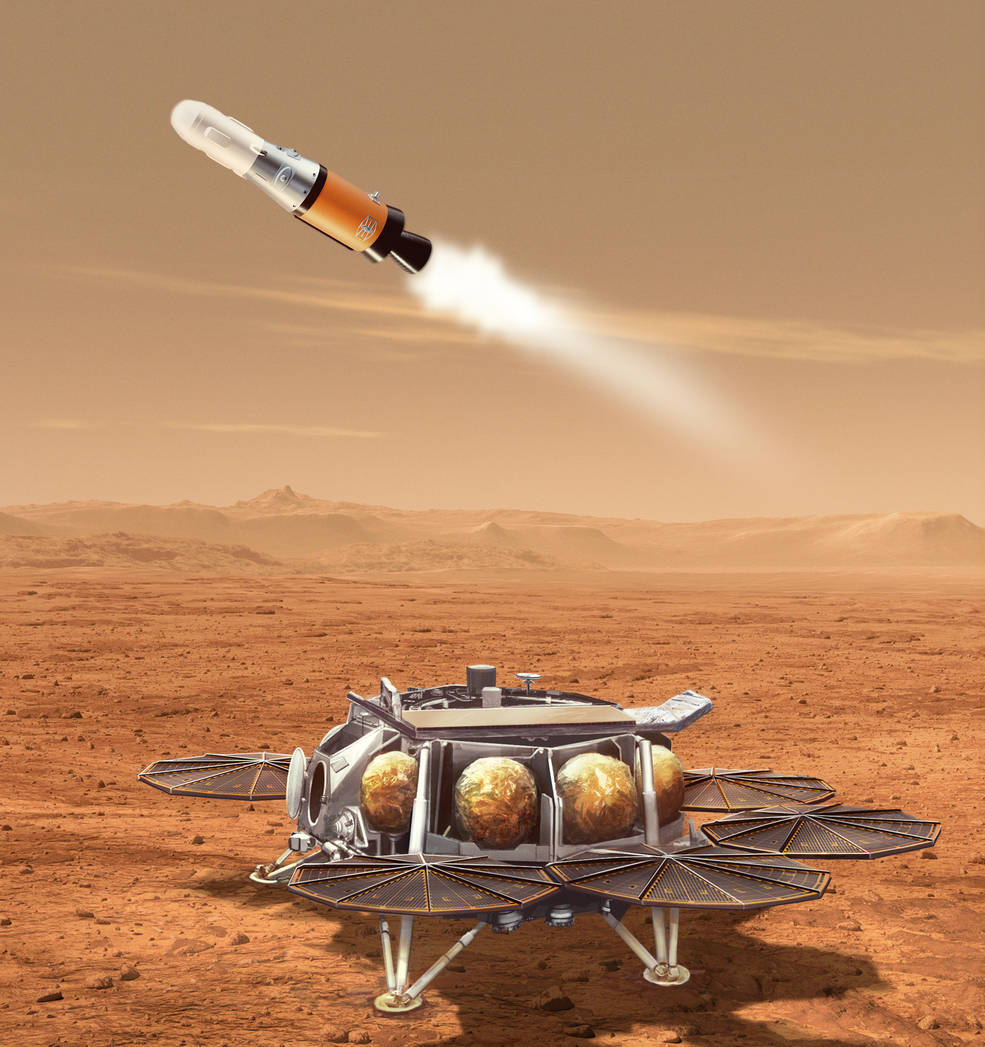 This illustration shows a concept for a proposed NASA Mars lander-and-rocket combination that would play a key role in returning to Earth samples of Mars material collected by the Perseverance rover. This Sample Retrieval Lander would carry a small rocket (about 10 feet, or 3 meters, tall) called the Mars Ascent Vehicle to the Martian surface. After using a robotic arm to load the rover’s sealed sample tubes into a container in the nose cone of the rocket, the lander would launch the Mars Ascent Vehicle into orbit around the Red Planet.
Credits: NASA/JPL-Caltech

Editor's Note: This advisory was updated on July 21 to note that audio of the media teleconference will livestream on the agency's website.

NASA will host a media teleconference at 11 a.m. EDT on Wednesday, July 27, to discuss the architecture for its Mars Sample Return campaign.

Audio of the teleconference will livestream online at:

NASA and ESA (European Space Agency) recently held a systems requirement review as part of the Mars Sample Return campaign’s conceptual design phase -- a phase when the architecture is refined and solidified. The briefing will present the architecture proposal that is expected to be finalized in September 2022.

The Mars Sample Return campaign may revolutionize humanity’s understanding of Mars by returning scientifically selected samples for study using the most sophisticated instruments around the world. This strategic partnership with ESA will be the first mission to return samples from another planet, including the first launch from the surface of another planet. The samples to be returned – currently being collected by Perseverance during its exploration of Jezero Crater, home to an ancient river-delta – are thought to be the best opportunity to reveal the early evolution of Mars, including the potential for life.

Media interested in participating in the call should send their full name, media affiliation, email address, and phone number to Alana Johnson no later than two hours before the start of the call at: alana.r.johnson@nasa.gov. A copy of NASA’s media accreditation policy is available online.

Micrometeorites are a potential hazard for any space mission, including NASA’s Mars Sample Return. The tiny rocks can travel up to 50 miles per second. At these speeds, "even dust could cause damage to a spacecraft," said Bruno Sarli, NASA engineer at NASA’s Goddard Space Flight Center, Greenbelt, Maryland.

Set far away from residents and surrounded by dunes, the Remote Hypervelocity Test Laboratory at NASA’s White Sands Test Facility in Las Cruces, New Mexico, has supported every human spaceflight program from the Space Shuttle to Artemis. The lab also supports testing for the International Space Station, Commercial Crew, and Commercial Resupply programs.

The lab uses 2-stage light gas guns to accelerate objects to speeds that simulate micrometeorite and orbital debris impacts on spacecraft shielding. The first stage uses gun powder as a propellent the way a standard gun does. The second stage uses highly compressed hydrogen gas that pushes gas into a smaller tube, increasing pressure in the gun, like a car piston. The gun's pressure gets so high that it would level the building if it were to explode. "That is why we hung out in the bunker during the test," said Sarli.

Mars Sample Return is a multi-mission campaign designed to retrieve scientifically selected samples of rock and sediment that the Perseverance rover is collecting on the surface of Mars. Bringing those samples to Earth would allow scientist to study them using the most advance laboratory instruments-those that will exist in the coming decade and those in the decades to follow. The campaign is one of the most ambitious endeavors in spaceflight history, involving multiple spacecraft, multiple launches, and multiple government agencies. Goddard is currently designing and developing the Capture, Containment, and Return System that would deliver the Mars sample tubes back to Earth.