The launch of the Russian Proton-M carrier rocket due to deliver the US EchoStar-21 satellite into orbit, has been rescheduled from November to December, International Launch Services, which operates Proton international launches, announced on its official website.

"The new launch date is December 2016," the website says.

The reasons for the postponement have not yet been announced.

As reported earlier, Russia’s space corporation Roscosmos had rescheduled the launch from October 10 to November 23. It was initially scheduled for late June, then postponed to August 29 and then to October 10.

The EchoStar-21 satellite (previously known as EchoStar T2 and TerreStar 2), made by Space Systems/Loral, is designed for providing communication services in Europe.

Launch of Proton rocket carrying US satellite scheduled for December 22

MOSCOW, The launch of the Russian Proton-M carrier rocket, due to deliver the US EchoStar-21 satellite into orbit, has been scheduled for December 22, the Khrunichev State Research and Production Space Center said. The launch was initially scheduled for the first quarter of 2016 but it has been repeatedly postponed, first to August 29, then October 10 and then November 23. On November 21 the launch was delayed once again.

The EchoStar-21 satellite (previously known as EchoStar T2 and TerreStar 2), made by Space Systems/Loral for EchoStar Corporation, is designed for providing communication services in Europe. It will become the sixth satellite in the EchoStar orbit group put into the orbit by the Proton carrier rocket. MOSCOW, The launch of a Proton-M carrier rocket with an EchoStar 21 satellite from the Baikonur space center in Kazakhstan has been delayed over the need to hold additional checks of the rocket’s systems and acceleration unit, Russia’s Khrunichev Space Center reported on Friday.

The Khrunichev Space Center is the producer of Proton carrier rockets. The launch was scheduled for December 28, about which the Khrunichev Space Center reported on Monday.

"The state commission has taken a decision to postpone the date of the launch of the Proton-M space rocket with the EchoStar 21 satellite to hold additional checks of the carrier rocket’s systems and acceleration unit. The launch date will be announced additionally," the statement said.

The launch was initially scheduled for the first quarter of 2016 but was postponed several times.

The EchoStar 21, earlier called EchoStar T2 and TerreStar 2, was produced by the company Space Systems/Loral and is designated to provide services on the territory of Europe. The satellite is to become the sixth in the EchoStar orbital grouping after it is launched by the Proton rocket.

MOSCOW, December 26. /Launch of Proton-M rocket with US communication satellite EchoStar 21 has been postponed, apparently till mid-January, a source in the space rocket industry has told TASS.

"At this point it looks like the launch has been delayed till mid-January," the source said. Earlier, the Khrunichev Center (manufacturer of the Proton-M rocket) said that the launch of the rocket from the Baikonur cosmodrome in Kazakhstan has been postponed for more checks of the rocket and the booster unit. The manufacturer has mentioned no new date of the launch.

Originally, the rocket was to blast off in the first quarter of 2016. The launch has been repeatedly postponed.

The EchoStar-21 satellite (previously named EchoStar T2 and TerreStar 2), manufactured by Space Systems/Loral, is meant to provide communication services in Europe. It is going to become a sixth satellite in the orbital group EchoStar, put in space with a Proton rocket.

The previous launch took place on June 9. The Intelsat 31 satellite was put in space.

BAIKONUR. The launch of a Proton carrier rocket with the EchoStar-21 satellite could be postponed yet again, a source at Baikonur cosmodrome told Interfax on Monday.

"Preparations continue for the launch of the Proton carrier rocket. However, given a combination of factors, a lengthy pause cannot be ruled out which may lead the launch to be postponed by several months," the source said.

It was reported that the Proton launch with the EchoStar-21 satellite was slated for February 2 but then postponed again by a week for non-technical reasons.

A source at the cosmodrome told Interfax that specialists at the Khrunichev State Research and Production Space Center were working to eliminate defects detected in late 2016 at the final stage of preparations for the launch.

As a result, the launch scheduled for December 28 had to be postponed until 2017, with January 31 set as a preliminary date.

The satellite is designed to provide mobile satellite communications services in Europe. The EchoStar 21 is to become a sixth satellite in the EchoStar orbital group to be launched atop a Proton rocket.

Launches of the Proton-M carriers will be resumed in 3.5 months, Deputy Prime Minister Dmitry Rogozin twitted on Saturday.

"Proton-M launches will be resumed in 3.5 months," he wrote.

Satellite Use:
EchoStar XXI is a state-of-the-art S-band satellite designed to
provide mobile connectivity throughout Europe. The spacecraft, based on SSL’s 1300 bus, will be located at the 10.25°East orbital slot. EchoStar subsidiary EchoStar Mobile Limited, an EU-wide licensee for an integrated mobile satellite service network with a complementary ground component, will utilizea portion of the capacity on EchoStar XXI to provision its next-generation, all IP-enabled mobile communications network.

Mission Profile:
The Proton M launch vehicle, utilizing a 5-burn Breeze M mission design, will lift off from Pad 24 at the Baikonur Cosmodrome in Kazakhstan, with theEchoStar XXI satellite on board. The first three stages of the Proton will use a standard ascent profile to place the orbital unit (Breeze M upper stage and theEchoStar XXI satellite) into a sub-orbital trajectory. From this point in the mission, the Breeze M will perform planned mission maneuvers to advance theorbital unit first to a nearly circular parking orbit, then to an intermediate orbit, followed by a transfer orbit, and finally to a geosynchronous transfer orbit.Separation of the EchoStar XXI satellite is scheduled to occur approximately 9 hours, 13 minutes after liftoff. 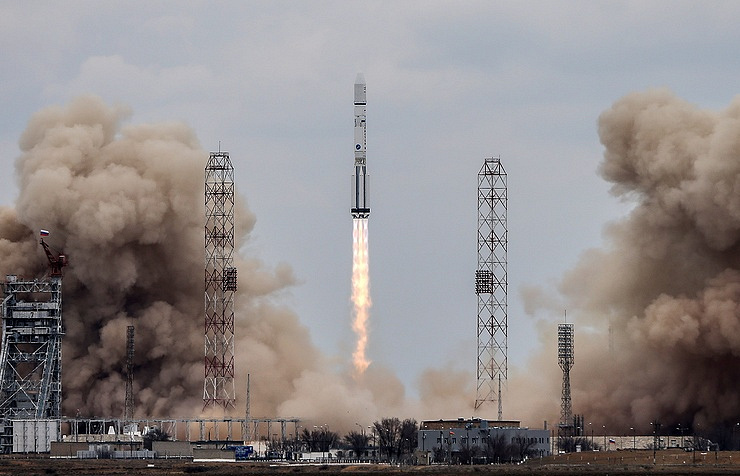 MOSCOW, June 8. /TASS/. A Proton-M rocket has launched the US telecom probe EChostar-21 into datum orbit, a spokesman for the Roscosmos space corporation informed TASS on Thursday. "The third-stage vehicle has separated from the space probe," the spokesman said.

The further travel of the space probe to a geo-transitional orbit with the parameters of 36,000 km by 2,300 km will be assisted by five burns of the upper-stage vehicle.

"The delivery of the probe to the datum orbit is likely to take 9 minutes 41 seconds," the spokesman said.

That was the first blast of the Proton-M launch vehicle this year. The previous liftoff of a Proton family vehicle took place on June 9, 2016. The vehicle brought the Intelsat-31 satellite then. Echostar-21 was to be launched soon after but the date was rescheduled time after time and then was postponed after specialists had found a defect in stage two and stage three engines.

Reports said the manufacturer had used a different soldering flux in the production of 71 engines. Although it was more expensive, it still did not meet the general technological requirements.

On the whole, delivery of Echostar-21 to the designated orbit (from the takeoff through to the separation of the space probe from the upper-stage booster) is likely to take 9 hours 13 minutes and will round up at 15:58 Moscow Time. After that the U.S. customer, the U.S. mobile telephony operator EchoStar Corporation, will take over control of the satellite.

The Proton-M launch vehicle blasted off from Baikonur Space Center in Kazakhstan at 06:45 Moscow Time.

Echostar-21 is a powerful geostationary telecom satellite built by Space Systems/Loral. It will support cellular services in Europe.

The satellite weighs 6,871 kg and has an estimated time limit of active existence of fifteen years.