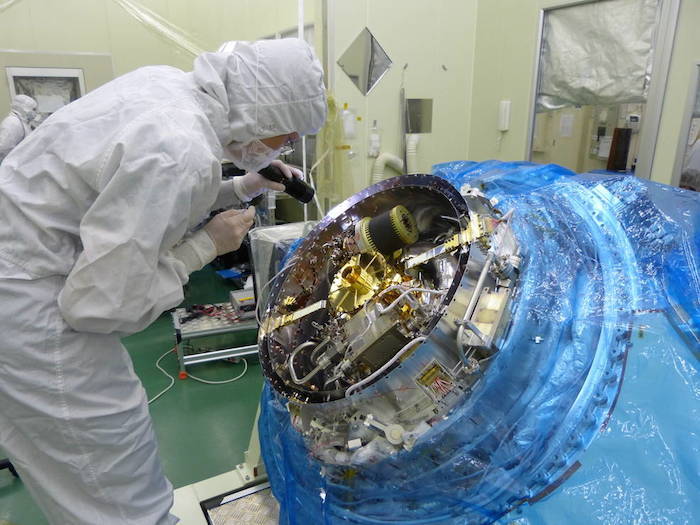 An instrument scientist inspects the Soft X-ray Spectrometer before its final closing. The SXS is one of four payloads flying on the Japanese-led Hitomi mission launching in February.
Credits: NASA
-
Advanced NASA-Developed Instrument Flies on Japan’s Hitomi
Now that Japan’s Hitomi spacecraft is safely in orbit, a team of NASA scientists is now ready to begin gathering data about the high-energy universe with an advanced instrument that carries never-before-flown technologies.
The mission, formerly known as Astro-H, launched February 17 from the Tanegashima Space Center aboard an H-IIA rocket. Hitomi is expected to significantly extend the studies initiated by JAXA’s Suzaku mission that officially ended in September 2015. NASA’s more capable Soft X-ray Spectrometer (SXS), developed by a team of scientists at NASA’s Goddard Space Flight Center in Greenbelt, Maryland, is one of the mission’s four scientific instruments.
With its unprecedented capabilities, SXS will enable a wide variety of breakthrough investigations — namely, studying the motion of matter approaching the event horizons of black holes, measuring the abundances of elements in the universe, and determining the evolution of galaxies and galaxy clusters throughout cosmic time. Hitomi carries three other powerful instruments: the Soft X-Ray Imager, the Hard X-Ray Imager, and the Soft Gamma Detector.
While similar in many respects to the X-ray Spectrometer that flew on Suzaku, which stopped operating shortly after launch due to a spacecraft design flaw, Hitomi’s SXS offers a number of significant improvements in the area of detector performance, cooling technologies, and collecting area. These advancements were made possible by NASA’s prior investment in these technologies, said NASA scientist Richard Kelley, who was named Goddard’s Innovator of the Year in 2008 based upon his work advancing SXS-related technologies, including the novel X-ray detection technique called microcalorimetry.
In microcalorimetry, X-ray photons striking the detector’s absorbers are converted to heat, the magnitude of which is directly proportional to the X-ray’s energy. Analysis of the distribution of the X-ray photon’s energies, or spectrum, reveals much about the physical properties of the source emitting the radiation.
Due to the inherently small size of an individual microcalorimeter detector, an array of detectors is constructed to collect as many X-ray photons as possible. To precisely determine the incoming X-ray photons, the detector package is cooled by a miniature refrigerator and the assembly is placed inside a dewar filled with liquid helium cooled to about one-tenth of a degree above absolute zero. The instrument is then placed at the focus of a large X-ray telescope to further augment the number of X-ray photons detected.
Below are more details on the specific NASA contributions to the SXS instrument.
SXS Microcalorimeter Array
Chief among the instrument’s improvements over its Suzaku predecessor is the SXS’s 36-pixel microcalorimeter array. Using improved absorbers, which help convert the individual X-rays into heat, it offers better energy resolution and operates at an even lower temperature, Kelley said.
Onboard Refrigerator
Just as important as SXS’s 36 microcalorimeters, however, is its cooling technology. When NASA selected Kelley and his team to build the Hitomi
instrument, the agency baselined a two-stage adiabatic demagnetization refrigerator (ADR), a mechanical cooling system that operates much like a household refrigerator, but using liquid helium as its coolant.
However, in the wake of the premature loss of the XRS due to the unforeseen coolant boil-off that occurred on Suzaku, on Hitomi, NASA wanted to make sure the dewar remained at a super-cold temperature even if it ran out of coolant, Kelley said. Consequently, the team added a third stage to the cooling system.
In addition to being more efficient, the three-stage ADR runs longer before needing a recharge. Better yet, however, the never-before-flown three-stage ADR will cool the dewar with or without the system’s liquid helium coolant.
“On Suzaku, once the coolant was gone, so was the instrument,” Kelley said. “NASA wanted to push beyond that and provide more capability. In other words, redundancy was the driving requirement for flying the three-stage ADR.”
X-ray Filters and Mirror Segments
In addition to the improvements incorporated in the detector array and associated cooling approach, enhancements were made in two other components of the instrument.
Kelley noted that the SXS is equipped with stronger filters needed to block longer-wavelength radiation from reaching the detector. The filters are situated in front of an aperture that allows X-rays to enter the dewar and is intricately built into the dewar. Should ice build up on the filters, mission operators can defrost them, much like how drivers can eliminate frost and ice on vehicle rear windows.
The instrument’s mirror assembly also benefited from past research and development. The mirrors are so good, in fact, that Kelley’s team produced two: one for the SXS and another for Hitomi’s Soft X-ray Imager, provided by JAXA.
Consisting of 1,624 curved mirror segments, all nested inside a canister, the assembly is lightweight and relatively inexpensive. The Goddard team made the mirror segments from commercial aluminum and then coated each with a special epoxy and a thin gold film to assure that each was smooth enough to efficiently reflect X-rays onto the microcalorimeter array. In addition, refinements made to the individual mirror segments’ shape (or “figure”) resulted in a mirror with considerably better focusing properties, which, in turn, contributed to the instrument’s overall detection capability.
“Our technological innovation is a higher-spectral resolution instrument, with greater collecting area — all built with a relatively small team working very closely with a team of scientists and engineers in Japan,” Kelley said.
Quelle: NASA
Astronomie
« Zum vorherigen Eintrag Zum nächsten Eintrag »
2985 Views
Created with page4