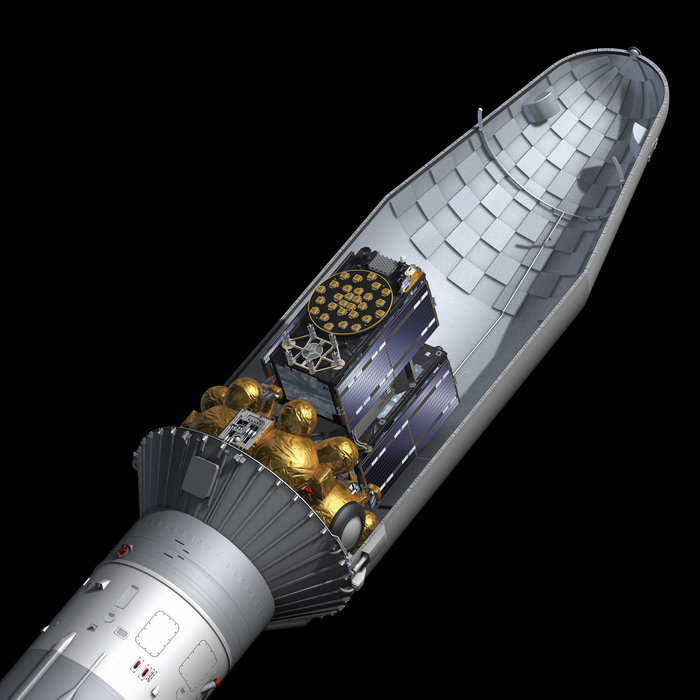 Cutaway view of the Soyuz rocket fairing carrying a pair of Galileo satellites, seen atop the Fregat upper stage that flies them most of the way to their intended medium-altitude orbit.

Another pair of Galileo navigation satellites is scheduled for launch by Soyuz rocket in May, ahead of a quartet on an Ariane 5 in the autumn, bringing the Galileo system a step closer to operational use.
The European Commission asked ESA to look into the feasibility of a Soyuz launch in the first half of the year to speed up the deployment of the constellation and to increase its robustness for delivering initial services.
One satellite is in storage at ESA’s technical centre in the Netherlands, having completed all its testing to clear it for flight, with another due to join it very soon.
The satellite platforms are built by OHB in Bremen, Germany, with their navigation payloads coming from Surrey Satellite Technology Ltd in the UK, using a steady stream of high-technology equipment sourced from all across Europe.
Once through testing, the satellites are flown to Europe’s Spaceport in French Guiana, to be launched two at a time on Soyuz rockets.
A total of 12 satellites has been deployed into orbit during the last four years – six in the last year alone.
The Galileo production line has attained a steady rhythm, as has the environmental testing, so six satellites are available for launch this year, more than were initially planned.
In the second half of the year, four satellites will be launched together for the very first time, on a customised “Ariane 5 ES Galileo”.
In development since 2012, it is based on the Ariane 5 ES (Evolution Storable), previously used to place ESA’s 20-tonne ATV vehicle into low orbit for resupplying the International Space Station.
This new variant will carry a lighter payload – four fuelled 738 kg Galileos plus their supporting dispenser – but will take it up to the much higher altitude around 23 222 km.
The target orbit is actually 300 km below the Galileo constellation’s final working altitude. This leaves Ariane’s upper stage in a stable ‘graveyard orbit’, while the four satellites manoeuvre themselves up to their operating position.
Following this first Ariane 5 flight, there should be 18 Galileo satellites in orbit.
Quelle: ESA
Raumfahrt
« Zum vorherigen Eintrag Zum nächsten Eintrag »
2808 Views
Created with page4