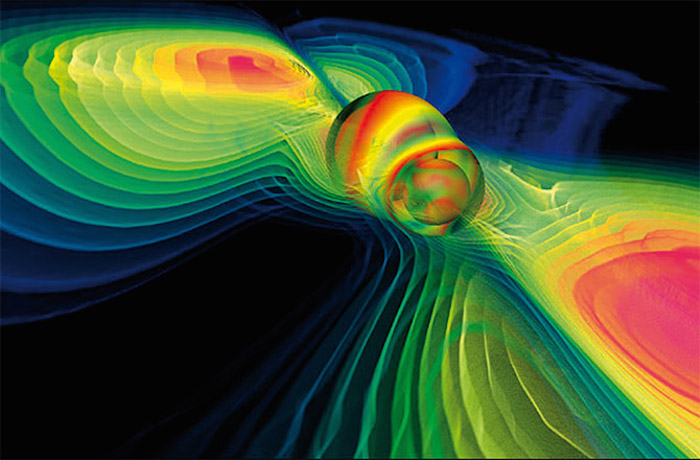 This computer simulation shows the production of gravitational waves during a black hole collision.

More gravitational wave discovery rumors are flying, but this time they’ve taken a specific — and, possibly, really exciting — new twist. And what’s more, we should find out whether the astrophysical rumor mill is correct or not by the end of this week; a National Science Foundation press announcement is planned for 10:30 a.m. ET on Thursday (Feb. 11), billed as an opportunity to bring together scientists from “Caltech, MIT and the LIGO Scientific Collaboration to update the scientific community on efforts to detect (gravitational waves).”
Hot on the heels of Lawrence Krauss’ tweeted rumors about a gravitational wave discovery last month, this new clue comes from a physicist who spoke with someone who saw a pre-published paper describing the historic discovery. This may sound like sketchy third-hand information, but the details discussed sound eerily specific.
“Spies who have seen the paper say they have seen gravitational waves from a binary black hole merger,” wrote theoretical physicist Clifford Burgess, of McMaster University in Hamilton, Canada, and the Perimeter Institute for Theoretical Physics in Waterloo, in an email to his faculty that was leaked to Twitter last week.
OK, so a “black hole merger”… interesting. But there’s more.
“They claim that the two detectors detected it consistent with it moving at speed c given the distance between them, and quote an equivalent 5.1 sigma detection,” he continues. “The bh masses were 36 and 29 solar masses initially and 62 at the end. Apparently the signal is spectacular and they even see the ring-down to kerr at the end.”
Burgess closes with: “Woohoo! (I hope)”
The news (like previous rumors) focuses around the powerful Laser Interferometer Gravitational-Wave Observatory (LIGO), which was upgraded in September 2015 to detect the hypothesized minuscule spacetime warping caused by gravitational waves. LIGO, which consists of 2 stations on opposite sides of the US, is finely tuned to detect the propagation of gravitational waves through our local volume of space.
From Burgess’ message we can grasp some of the physics he is describing. If (IF!) the rumors are true, the twin LIGO stations (located in Louisiana and Washington) have detected the same gravitational wave signal — with the time delay expected between the 2 stations. That signal, traveling at the speed of light (“c”), carries with it information of the phenomenon that is creating the waves. Burgess also mentions that the signal has a statistical significance of 5.1 sigma, which exceeds the criteria for the signal being real — it is therefore a solid discovery. He also points out that the paper in question will be published by the journal Nature on Feb. 11 (Thursday), coinciding with the National Science Foundation’s meeting on the same day.
Merging Black Holes?
It is predicted that any acceleration of a large mass in the cosmos will generate ripples in spacetime. For example, 2 black holes colliding would be a hotbed of gravitational wave generation. And the email describes just that: 2 black holes (of 36 and 29 times the mass of our sun) collided and merged to create a more massive black hole “weighing in” at 62 solar masses. He also hints that the gravitational wave signal reveals the resulting black hole is spinning (a "Kerr" black hole).
Although it’s absolutley right to exercise caution and a heavy dose of skepticism when confronted with rumors of a historic astrophysical discovery, we have to consider the sources that have leaked this information so far. All are prominent physics professionals. Though they’re obviously lousy at keeping big news under their hats, they can be considered to be trustworthy. However, none of these rumors are being circulated by LIGO scientists themselves, but by physicists who are working with, or have seen LIGO data or know someone who knows someone who has seen documents pertaining to the discovery.
I’ll remain skeptically excited for the time being. But my hope is that by Thursday’s NSF announcement we’ll have knowledge of the first ever directly detected gravitational waves — 100 years after Einstein first predicted their existence. Then we can look ahead and really consider what this discovery means for the future of modern astrophysics and astronomy — not only will this be evidence that gravitational waves really do exist (even though we already had pretty solid indirect evidence of their existence), we will also have a direct signal from the mother of all cosmic collisions, revealing (beyond theory) how black holes collide and grow.
Quelle: D-News
Astronomie
« Zum vorherigen Eintrag Zum nächsten Eintrag »
3123 Views
Created with page4