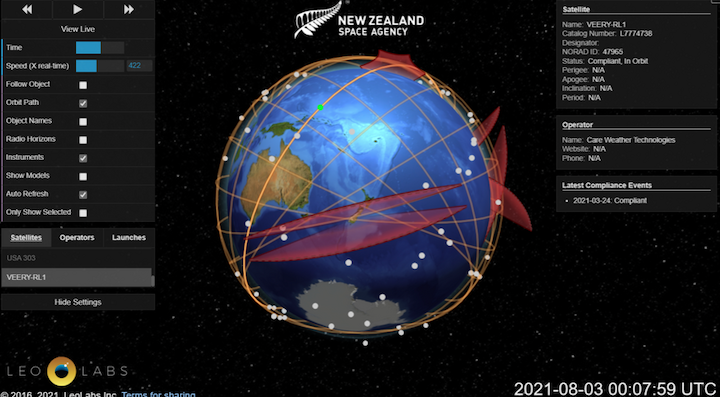 SAN FRANCISCO – LeoLabs and the New Zealand Space Agency (NZSA) are working together to develop a cloud-based software platform for monitoring space activity. New Zealand’s Ministry of Business, Innovation and Employment announced the multiyear deal Aug. 5, saying it would lead to “the world’s most advanced Space Regulatory and Sustainability Platform.”

LeoLabs, a Silicon Valley startup focused on monitoring activity in low Earth orbit, began developing the platform with the NZSA in 2019. In the past two years, LeoLabs and NZSA have moved from a prototype platform that tracks objects in low Earth orbit and ensures satellite operators are fulfilling commitments made when applying for launch licenses to a working model.

Much of LeoLabs’ business to date has focused on helping satellite operators identify potential collisions and determine how to safely move out of the path of other satellites and space debris. In this new line of business, LeoLabs is helping a government agency fulfill its commitment under the Outer Space Treaty to exercise control over space activities.

“We think it’s a template that can be used around the world,” LeoLabs CEO Dan Ceperley told SpaceNews. “Every single spacefaring nation has a set of assets they are responsible for and an impact on space sustainability. They need to be informed about what risks they face.”

Under the Outer Space Treaty, the launching state is required to license satellites and ensure satellite operators comply with licensing rules.

That does not always happen, though. While nations put significant effort into the licensing process, many do not have the tools to track satellites in orbit or to take action if a satellite diverges from its orbit or fails to de-orbit in the agreed-upon timeframe.

“Our partnership with LeoLabs has allowed us to better understand what’s in space, which is key to upholding our duties as a launching country and ensuring the responsible use of the space environment,” Peter Crabtree, general manager for science, innovation and international in New Zealand’s Ministry of Business, Innovation and Employment, said in a statement.

LeoLabs first revealed ties with New Zealand in 2018 when it announced plans to build the Kiwi Space Radar.  That S-band radar began tracking objects in low Earth orbit as small as 2 centimeters in diameter in 2019.

The New Zealand Space Agency has stepped to the forefront on space sustainability,” Ceperley said. “New Zealand is the gateway to space for a lot of innovative companies and they’ve always had an environmental-sustainability thread to their national ethos.”

The Space Regulatory and Sustainability Platform draws information from LeoLabs’ network of four phased-array radars to show the location of objects in orbit and highlight potential problems. Following a pilot phase, NZSA has embedded the platform into its space operations to track the position and orbit of individual satellites, view historical orbit records, obtain reports on changes in satellite orbits and receive alerts when a satellite is not complying with its licensing agreement.

Most of the time satellites remain in their intended orbit and the platform provides confirmation, Ceperley said.

“When there’s some early indication that a satellite is in a different orbit than expected, you have a lot of time to react,” Cepereley said. “It doesn’t have to be an emergency. It can be a discussion. You want the heads up as soon as possible so you can react, whether you’re the company or the regulator.”