It’s time again for one of the biggest meteor showers of the year! The Perseids are already showing up in our night skies—and when they peak in mid-August, it’s likely to be one of our most impressive skywatching opportunities for a while. 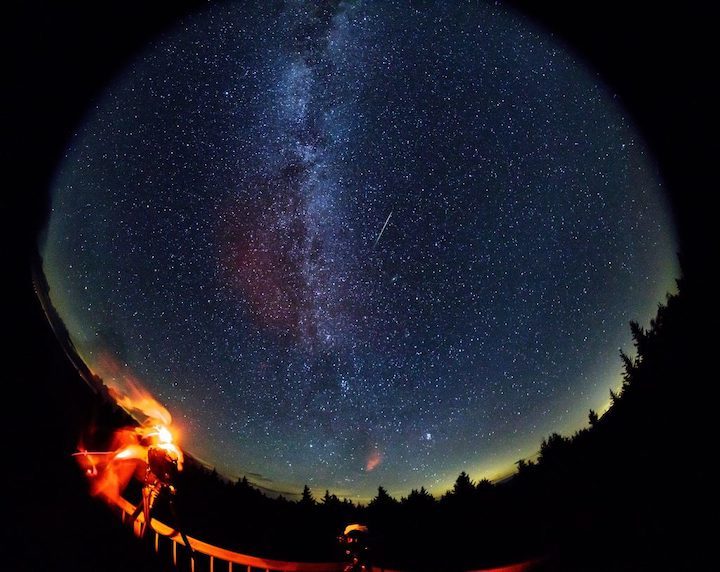 Our meteor-tracking cameras spotted their first Perseid on July 26, but your best chance to see them will start the night of Aug. 11. With the crescent moon setting early, the skies will be dark for the peak viewing hours of midnight (local time) to dawn on Aug. 12.

If you’re in the Northern Hemisphere, and far away from light pollution, you might spot more than 40 Perseids an hour! (If you’re in a city, you may only see a few every hour; skywatchers in the Southern Hemisphere will also see fewer Perseids, with none visible below about 30 degrees south latitude.) The night of Aug. 12-13 will be another great opportunity to see the Perseids: with a full Moon (and lower meteor activity) during the Perseids’ peak in 2022 and a waning crescent high in the sky for 2023, this might be your best chance to do some summer skywatching for a few years.

Find somewhere comfortable, avoiding bright lights as much as possible (yes, including your phone), and give your eyes some time to adjust to the dark—up to half an hour if you can. The Perseids will appear as quick, small streaks of light: they get their name because they look like they’re coming from the direction of the constellation Perseus (near Aries and Taurus in the night sky), but Perseids in that area can be hard to spot from the perspective of Earth. So just look up and enjoy the show!

If you can’t see the Perseids where you live, join NASA to watch them on social media! Tune in overnight Aug. 11-12 (10 PM–5 AM CDT; 3–10 AM UTC) on Facebook, Twitter and YouTube to look for meteors with space fans from around the world. If skies are cloudy the night of Aug. 11, we’ll try again the same time on Aug. 12-13. Our livestream is hosted by the Meteoroid Environment Office at NASA’s Marshall Space Flight Center, which tracks meteors, fireballs, and other uncommon sights in the night sky to inform the public and help keep our astronauts and spacecraft safe.

Where do the Perseids *actually* come from?

The Perseids are fragments of the comet Swift-Tuttle, which orbits between the Sun and beyond the orbit of Pluto once every 133 years. Every year, the Earth passes near the path of the comet, and the debris left behind by Swift-Tuttle shows up as meteors in our sky. (Don’t worry, there’s no chance that we’ll run into the actual comet anytime soon.)

With no interference from the Moon, this year’s Perseid meteor shower should be excellent. Find a dark location and enjoy every flash. 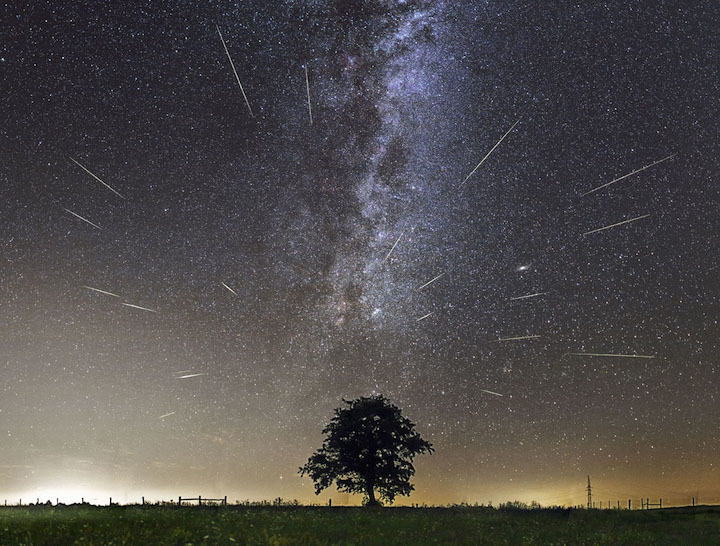 With the Moon just three and a half days past new and setting around 10 p.m. local daylight-saving time, the stage is set for a splendid show of the annual Perseid meteor shower. Because the shower is active from mid-July to late-August, don't be surprised to see a few Perseids on any clear night in the next few weeks. But for the whole enchilada, plan to watch on the nights of August 11–12 when the shower is expected to reach maximum. There are indications the peak may even extend into the next night, so consider August 12–13 as well.

At peak, the zenithal hourly rate of the Perseids can reach 100 per hour, but this is an idealized number with the radiant at the zenith and stars visible to magnitude 6.5. Moreover, that rate might last only an hour. Most observers under good skies will see closer to 50 per hour and half that from areas that are light-polluted or under cover of wildfire smoke. To maximize your shower enjoyment, find as dark a site as possible.

If you can travel, use the interactive Light Pollution Map to identify the darkest skies in your area. Drag and scroll with your mouse to zoom into the region of interest which should be color-coded according to the amount of light pollution. Avoid the purple, red, and yellow zones and steer toward the night-sky-friendly gray regions.

Even under less-than-ideal skies, you'll still see plenty of meteors. I like to lie back in a reclining chair and enjoy what comes, letting my camera's intervalometer do the picture-taking. While you'll see meteors no matter what direction you look, I often face east-southeast so I can catch the "shorties" that appear near the radiant as well as the longer streaks at right angles to it.

Allow at least an hour for the shower. That'll give you time to get into the rhythm of the event as you watch the stars wheel above and Jupiter and Saturn rise into the southern sky. Both planets are at opposition this month and located in Capricornus. Jupiter offers a special surprise on the night of the 11th.

A modest number of Perseids will be visible starting around 10 p.m. local daylight-saving time, when the radiant reaches 20° altitude in the northeastern sky. But the later you stay up the more you'll see: The hours between 2–4:30 a.m. are typically best. That's when the radiant climbs highest, and the fewest meteors are cut off by the horizon. After midnight, the Earth also rotates into the direction of the meteor stream, which increases the relative velocity at which meteoroids strike the atmosphere, pumping up their brightness, visibility, and number.

Perseids are the wayward children of their parent Comet 109P/Swift-Tuttle, a periodic comet that returns to Earth's vicinity every 133 years. It last reached perihelion in 1992 and will again in 2125. Each visit it lays down a spreading trail of dust resembling a jet contrail called a filament. Every August, the Earth intersects the comet's orbit and plows through the debris from a previous pass.

As each grain slams into the atmosphere at around 60 kilometers per second, it creates a supersonic shock wave that compresses and heats the air in front of it. This in turn heats the meteoroid white-hot and burns it to soot. At the same time, the grain's passage excites (ionizes) the air molecules along its path. When the molecules relax back to their previous unexcited state, they radiate light. Both the glowing, hot bits of comet dust and trails of ionized air are responsible for the familiar meteor streaks. The average width of a meteor track is about a meter, while the length spans tens of kilometers. It's comprised of glowing, ionized air, and metal and silicate vapor from the meteoroid itself.

Not only are Perseids swift, they're famous for their fireballs, which are meteors of magnitude –3 or brighter. Bill Cooke of NASA’s Meteoroid Environment Office calls the Perseids the “fireball champion” of annual meteor showers. Cooke believes that’s because the parent comet has a larger than normal nucleus (about 26 kilometers) and is capable of producing the larger meteroid fragments that create brilliant flares.

The Perseids have been observed since at least AD 36 according to a Chinese record, but weren’t officially recognized as a recurring meteor shower until the late 1830s, when three European observers independently noted that an unusual number of meteors routinely appeared at the same time each August. Although their work led to the formal acceptance of the shower they weren’t the first to notice their repeated appearances. That honor goes to German and English Catholics who for centuries called the annual August meteor display theTears of St. Lawrence, after an early deacon of the church who was put to death by the Roman emperor Valerian on August 10 AD 258.

Whether you're watching from a mountaintop, shoreline, or just the backyard, go with the flow and enjoy the show. And if clouds interfere, astrophysicist and public astronomy enthusiast Gianluca Masi will stream the shower live on his Virtual Telescope site beginning at 8 p.m. EDT on August 11th. You can also head to the live feed of the Instituto de Astrofíca de las Canarias starting at 7:15 p.m. EDT (23:15 UT) on August 12th.