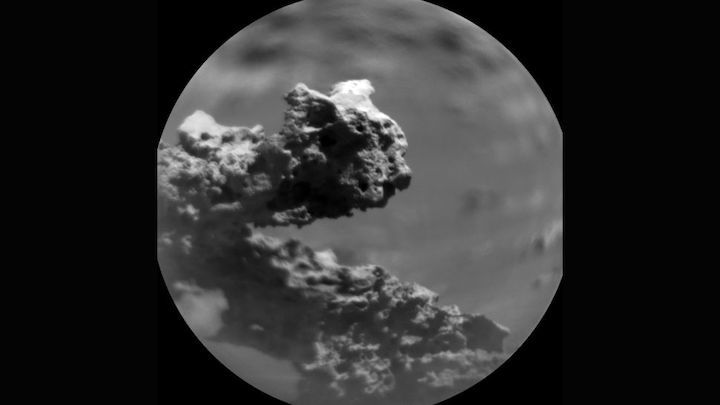 The Mars Curiosity rover recently got a glimpse of this cute little rock feature in Gale Crater, where the rover has been exploring since 2012. The tiny textured arch is only about 6.5 inches (16.5 centimeters) tall, but its idiosyncratic shape had mission scientists excited.

"I continue to be dazzled by the textures we're seeing, especially the prevalence of centimeter sized bumps and lumps poking out of the bedrock," planetary geologist Abigail Fraeman of NASA's Jet Propulsion Laboratory wrote in a blog post about the feature.

The textured arch sits at the base of Mount Sharp, a peak that rises 3.4 miles (5.5 kilometers) out of the floor of the Gale Crater. According to Fraeman, Curiosity is exploring some interesting geology at the transition between clay-heavy layers and sulfate-laden layers within the mountain's rocks. Sulfates can be left behind by flowing water, so exploring these sulfate-bearing layers can help reveal more about Mars' wet past.

Curiosity was initially designed for a two-year mission on Mars, but the SUV-size robot has been puttering around Gale Crater for nine years, snapping selfies and making scientific discoveries. Recently, scientists analyzing data sent back by Curiosity learned that the clays that line Gale Crater are less stable than previously believed, meaning that evidence of past microbial life in the areacould have been wiped away. However, the brines that did the erasing might have also supported new life at the subsurface, so scientists are still enthusiastic about the possibility of finding Martian fossils, should they exist.

The rover is now heading farther up Mount Sharp, stopping along the way to take pictures and analyze rock composition with ChemCam, an instrument that uses lasers to vaporize tiny bits of rock and then measures the chemicals and minerals in those samples.