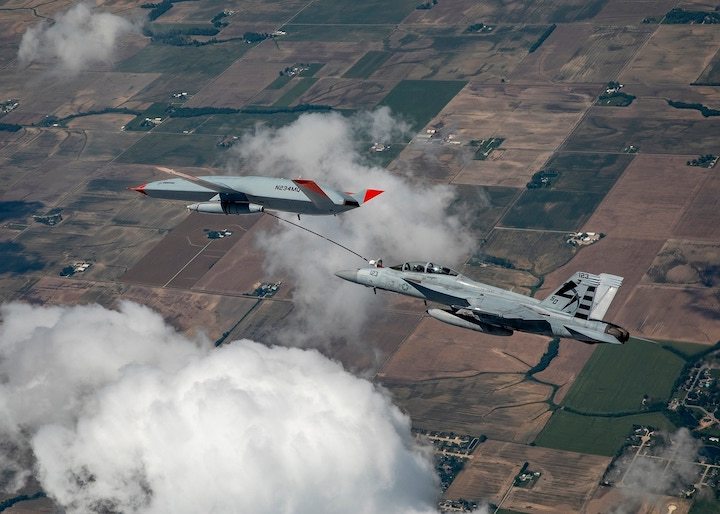 WASHINGTON — Boeing conducted its first manned-unmanned teaming test of the MQ-25A Stingray paired with U.S. Navy aircraft, demonstrating the unmanned tanker can take commands from pilots midair and adjust as the mission changes.

The MQ-25 was designed to primarily communicate with a ground-based air vehicle operator, or AVO — likely located on an aircraft carrier — but that could change as the drone’s mission set and concept of operations evolve.

The drone flies autonomously, but it’s nearly always in contact with the an AVO and flies a mission plan it’s given ahead of time, Boeing’s MQ-25 advanced design leader BD Gaddis told reporters Aug. 3 at the Navy League’s Sea Air Space conference.

But when the UAV sees its first action in combat, “what happens when those communication links are either degraded, denied or prohibited?” Gaddis questioned. “That’s why manned-unmanned teaming is essential to MQ-25, because we can’t be talking to the AVO all the time.”

Gaddis said communications between the MQ-25 and the aircraft carrier could be cut off if an adversary jams or otherwise disrupts the network, or if the ship’s crew halts its communications as a means of hiding from an adversary.

“We’re building an airplane that goes to war, so we want that airplane to be robust and capable when it goes to war. We already know there will be eras and times that the carrier will decide it wants to shut its radios down and move, and our airplane can’t just say: ‘I have to go home.’ That’s not OK. We know that; the Navy’s told us that; we’re working that,” Dave Bujold, Boeing’s MQ-25 program director, said at the event.

During the demonstration, which took place in a virtual environment, the MQ-25 was given a mission plan and launched from the carrier. Then, once airborne, a Boeing F/A-18E/F Super Hornet and a Northrop Grumman E-2D Advanced Hawkeye sent messages via the Link 16 tactical data link network to the drone, asking it to deviate from the mission plan and refuel them in a different location with a different quantity of fuel, among other alternate conditions.

Gaddis explained one vignette: when a Super Hornet needs to refuel but is in a hurry to fly to a target. The fighter doesn’t want to radio back to the carrier and announce that it’s heading to a target, ruining the element of surprise. So the jet messages the Stingray to leave its orbit around the carrier and meet the jet in a new location en route to its target.

The challenge in this scenario is that the MQ-25 must first recognize it’s receiving orders that override its preplanned mission. Then it must understand that a manned plane in the air is giving it orders, not the carrier-based operator. And then it must translate the order into autonomous behaviors and act accordingly.

The virtual demonstration took place in an F-18 Super Hornet trailer, where Boeing installed the MQ-25 and E-2D simulation software, and operated the tanker drone alongside the manned planes. The company spent about three hours at the Pentagon showing nearly 80 Navy leaders the manned-unmanned teaming event.

Gaddis said the demonstration showed no updates were needed to the E-2D to conduct this manned-unmanned teaming, and the Super Hornet would need what Boeing believes will be small software updates to allow new kinds of messages to be sent over Link 16. The message types already exist and are in the E-2D’s Link 16 library, but they’d have to be added to the Super Hornet.

The Navy is now looking at where this funding could be inserted into upcoming budget cycles, potentially fielding the Super Hornet software update ahead of the first MQ-25 deployment.

Later this year Boeing will do a similar demonstration with a different internet protocol-based data link. Gaddis said Link 16 is ubiquitous throughout global naval fleets, making it a good starting place, but that the data link would eventually be replaced with something more secure. Boeing also wants to prove the manned-unmanned teaming concept works on any kind of network.

Next year, the company will perform more tests in a lab setting and write the extensive autonomy code for the drone to convert commands from a plane into actionable tasks. In 2023, MQ-25 will undergo live flight tests.

Bujold said the demonstration both showed basic manned-unmanned teaming in action and the state of autonomy in software development as well as where improvements must be made for more sophisticated missions, regardless of the platform or the defense companies involved.