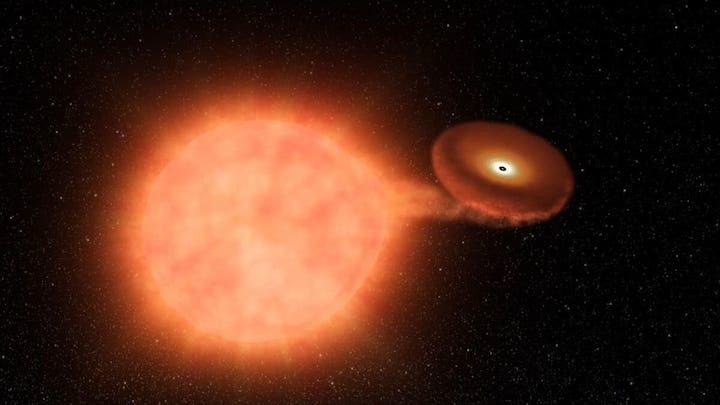 This artist’s impression shows the explosion of a white dwarf in a Type Ia supernova, where the white dwarf's gravity steals material away from a nearby stellar companion. When the white dwarf reaches an estimated 1.4 times the current mass of the Sun, it can no longer sustain its own weight, and blows up. Credit: NASA/JPL-Caltech

Astronomers have discovered that the runaway star LP 40−365 is not only catapulting out of our galaxy, but it’s spinning as it goes.

Astronomers have known for a few decades that LP 40−365 is a stellar oddball – not only is it hightailing it out of the Milky Way, but it’s also tiny (0.14 solar masses) and one of the most metal-rich stars ever detected. Previous studies have suggested that it is the remains of a white dwarf star after a failed supernova detonation, where the star wasn’t completely destroyed. This explosion gave the star-shrapnel an almighty kick that is now propelling it out of the Milky Way.

“To have gone through partial detonation and still survive is very cool and unique, and it’s only in the last few years that we’ve started to think this kind of star could exist,” says Odelia Putterman, co-author of the study.

Hermes and Putterman have now examined data from NASA’s Hubble Space Telescope and Transiting Exoplanet Survey Satellite (TESS), specifically looking at brightness patterns, and deduced that LP 40−365 is rotating on its way out of the galaxy.

“We dug a little deeper to figure out why that star [was repeatedly] getting brighter and fainter, and the simplest explanation is that we’re seeing something at [its] surface rotate in and out of view every nine hours,” says Hermes.

It’s normal for a star to rotate – all of them do, with our Sun spinning once on its axis every 27 days. But for a remnant of such a violent explosion, LP 40−365’s nine-hour rotation is positively leisurely.

This rotation rate might give us clues about the system in which the star originated.

The star is thought to be the result of a failed subtype of Type Ia supernova called a Type Iax. In this system, a white dwarf is locked in orbit with another star, which it ‘feeds’ on, stealing gas and dust until the white dwarf grows big enough to collapse under its own gravity and explode.

Based on the rotation rate, this new study suggests that LP 40−365 is the remnant of the self-destructing white dwarf and not the other star, which likely slingshotted off in another direction.