Some might be able to see a pair of rockets streaking to space before bedtime. 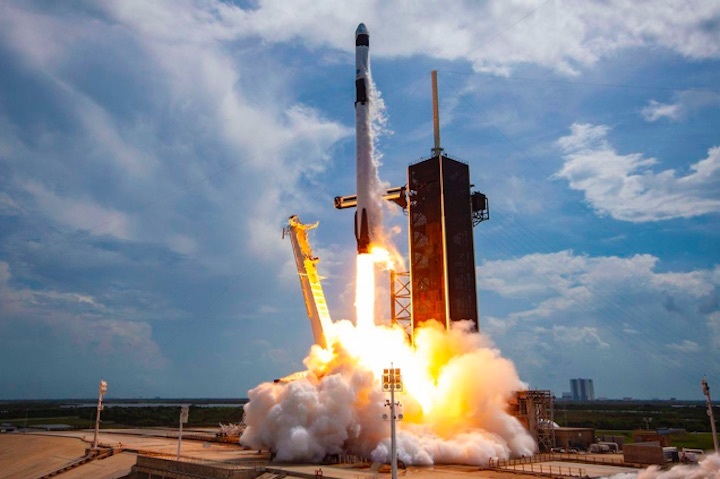 SpaceX's Crew Dragon spacecraft, perched atop the company's Falcon 9 rocket, takes off in May from launch pad 39A in Cape Canaveral, Florida, carrying NASA astronauts Robert Behnken and Douglas Hurley to the International Space Station.

The US East Coast on Tuesday evening could see two major rocket launches within about 30 minutes of each other, assuming the weather gods and luck are on their side.

SpaceX is scheduled to launch a new GPS satellite for the US Air Force from Cape Canaveral between 6:55 and 7:10 p.m. PT (9:55 and 10:10 p.m. ET in Florida). And a Northrop Grumman Antares rocket is set to lift off carrying a Cygnus cargo freighter to the International Space Station from the Wallops Island launch facility in Virginia at 7:27 p.m. PT (10:27 p.m. ET).

This means that, if skies are clear, a good chunk of the Eastern US will have a decent chance of catching at least one of the rockets as they slice through the night toward orbit on a column of fire.

A SpaceX Falcon 9 will carry the third generation of GPS satellite for the Air Force. This is the fourth satellite from this class developed by Lockheed Martin to make it to orbit. The mission will use a rocket that's never been launched before. After lifting the satellite toward orbit, it will make a landing on one of the company's droneships in the Atlantic.

Shortly thereafter, an Antares rocket topped with a Cygnus spacecraft loaded with 4 tons of equipment, supplies and experiments bound for the ISS will begin its three-day journey before finally docking with the space station on Oct. 3.

The Cygnus will remain attached to the ISS until mid-December when it'll be sent back toward a fiery demise in Earth's atmosphere. But before it burns up completely, NASA will conduct an experiment that will basically light a series of small, controlled fires in the spacecraft and record data about how different materials burn in space.

As for the Antares rocket, it's also expendable, and will fall into the Atlantic Ocean after launch.

Residents of Florida may be used to seeing rockets streaking into the sky, but the more rare night launch from Virginia offers quite the encore performance that may be visible from as far as Georgia up to Rhode Island. NASA offers this handy viewing guide showing when the rocket should become visible from different locations.