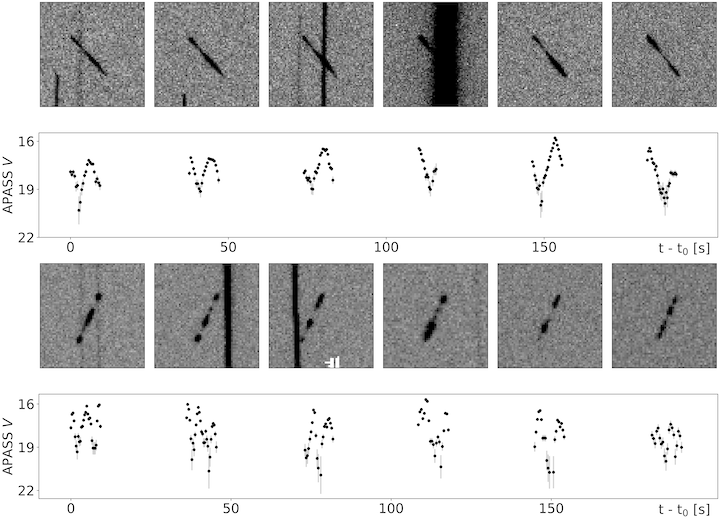 · Many of the objects detected show optical signatures of tumbling, providing insight into the dynamical evolution of debris within the geosynchronous environment

· First instalment of DebrisWatch, an ongoing collaboration between the University of Warwick and the Defence Science and Technology Laboratory (UK)

University of Warwick astronomers are warning that orbital debris posing a threat to operational satellites is not being monitored closely enough, as they publish a new survey finding that over 75% of the orbital debris they detected could not be matched to known objects in public satellite catalogues.

The astronomers are calling for more regular deep surveys of orbital debris at high altitudes to help characterise the resident objects and better determine the risks posed to the active satellites that we rely on for essential services, including communications, weather monitoring and navigation.

The research forms part of DebrisWatch, an ongoing collaboration between the University of Warwick and the Defence Science and Technology Laboratory (UK) aiming to provide a fresh take on surveys of the geosynchronous region that have been conducted in the past. The results are reported in the journal Advances in Space Research. The research was part-funded by the Science and Technology Facilities Council (STFC), part of UK Research and Innovation, and was supported by the Royal Society.

This survey was optimised to search for faint debris, objects that are too small or poorly reflective to be regularly monitored and recorded in publicly available catalogues. The US Strategic Command (USSTRATCOM) maintains the most complete public catalogue of space objects, using its global Space Surveillance Network (SSN) comprising over 30 ground-based radars and optical telescopes, alongside 6 satellites in orbit. The SSN is able to monitor high-altitude objects down to roughly 1 metre in diameter. Although certain residents of the geosynchronous region are often referred to as ‘stationary’, collisions can still occur with relative velocities of kilometres per second. With this in mind, even small objects could cause a lot of damage to an active satellite.

Images from the survey were analysed using a custom software pipeline designed to pick out candidate debris objects and investigate their brightness over time. The resulting ‘light curves’ contain a wealth of information about the objects themselves, including their shape, surface properties and attitude, but are also affected by other factors like viewing geometry and atmospheric interference. Disentangling these components remains a very difficult task, and large quantities of high-quality data will be key to developing and refining the necessary techniques.

The astronomers focused their survey on the geosynchronous region, located roughly 36,000 kilometres above the Equator, where satellites orbit with a period that matches the Earth’s rotation. Far above the outermost layer of the Earth’s atmosphere, there are no natural mechanisms (like atmospheric drag) to induce orbital decay, so debris generated in the vicinity of the geosynchronous region will remain there for a very long time indeed.

To help them uncover faint debris, the astronomers made use of the Isaac Newton Telescope on the Canary Island of La Palma, which has a large 2.54 m aperture, allowing it to collect photons of light over a large area. They used an optimised strategy to ensure that the sunlight reflecting off of candidate objects would fall within the same pixels of the camera, to increase their chances of being detected. Strips of sky were scanned above, along and below the geostationary belt, where most of the operational geosynchronous satellites reside.

The majority of the orbital tracks detected by the astronomers had brightnesses corresponding to roughly 1 metre or less. Sure enough, over 95% of these faint detections failed to match with a known object in the publicly available USSTRATCOM catalogue, as they are too faint to be regularly and reliably monitored by the SSN. When the researchers included all their detections – including those above and below 1m – over 75% failed to match.

Lead author James Blake, a PhD student in the University of Warwick Department of Physics, said: “The light curves extracted from our survey images show just how varied these objects can be, both in terms of their physical nature and of their attitude or behaviour within orbit. Many of the faint, uncatalogued debris appear to be tumbling, showing significant brightness variation across the observation window. These sorts of features can tell us a lot about the perturbative forces acting on residents of the geosynchronous region, but also highlight that we need to be more careful when making assumptions about the properties of these objects. We need to probe the faint debris population further and obtain more data to gain a better understanding of what’s out there.

“It’s important that we continue to observe the geosynchronous region with large telescopes wherever possible, to start to build up a more complete feel for the faint debris environment. With this survey, we’ve probed deeper than ever before, and still the population appears to be climbing as our sensitivity limit is reached. While we’re dealing with small number statistics here, it’s unsurprising that we see many more small, faint objects than large, bright ones.”

Artificial debris orbiting the Earth can originate for a number of reasons: the satellites themselves become debris when they reach the end of their mission lifetime; rocket bodies abandoned after successfully launching their payloads can explode or ‘break-up’ after many years in orbit; collisions can occur between orbiting bodies, sometimes resulting in thousands of new fragments; the harsh environment of space can deteriorate satellites over time, shedding bits of insulating blanket and paint flakes.

The astronomers are now investigating ways to extract even more information from the survey data, using simultaneous observations that were taken with a second, smaller instrument. They aim to foster new collaborations to ensure this survey can act as a gateway to an enduring activity.

Co-author Professor Don Pollacco, from the University of Warwick Department of Physics, said: “This kind of data will be key in the development of algorithms to characterise objects in the geosynchronous region. Remember that we’re not dealing with close-up photographs here, even the big satellites appear as non-resolved blobs of light in our images. Light curves offer a great opportunity to learn more about the way these objects behave and what they might be. The more high-quality data we take, the better chance we have of developing these tools.”