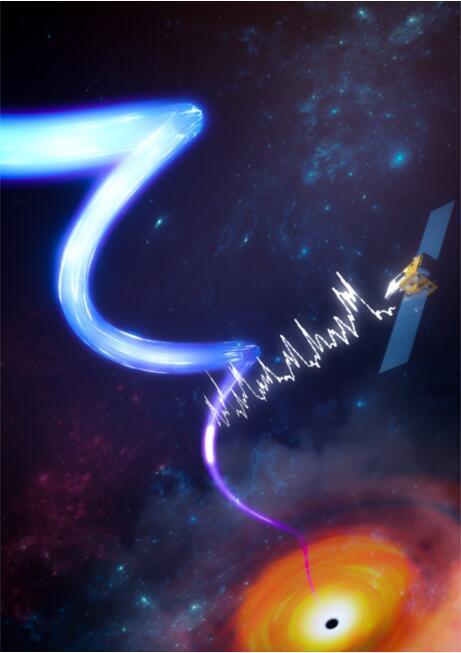 Insight-HXMT, China's first space X-ray astronomical satellite, has discovered a low-frequency quasi-periodic oscillation (QPO) above 200 kiloelectron volts (keV) in a black hole binary, making it the highest energy low-frequency QPO ever found. The scientists also found that the QPO originated from the precession of a relativistic jet (high-speed outward-moving plasma stream) near the event horizon of the black hole. These discoveries have important implications for resolving the long-running debate about the physical origin of low-frequency QPOs.

This work, published online in Nature Astronomy on Sept. 21, was primarily conducted by scientists from the Institute of High Energy Physics (IHEP) of the Chinese Academy of Sciences (CAS), the University of Southampton (United Kingdom), Eberhard Karls University of Tübingen (Germany), and the Shanghai Astronomical Observatory of CAS.

Low-frequency QPOs, discovered in the 1980s, are a common observational timing feature in transient black hole binaries. They are quasi-periodic, but not precisely periodic, modulations in light curves. For more than 30 years, the origin of low-frequency QPOs was not understood. The two most popular models explaining their origin are: 1) the oscillations are caused by the instability of the accretion disk when matter rotates around and finally falls into the black hole; and 2) the quasi-periodic X-ray modulations are produced by the oscillation or precession of the coronal X-ray emitting region close to the black hole.

The new black hole X-ray binary MAXI J1820+070, consisting of a black hole of several solar masses and a companion star, started to undergo an outburst on March 11, 2018. It has been one of the brightest X-ray sources in the sky for a long time. Insight-HXMT quickly responded and performed high-cadence pointing observations on this source for several months, accumulating a huge amount of observational data.

Based on these data, the scientists found that the low-frequency QPO of MAXI J1820+070 appeared in a wide energy range and its maximum detection energy exceeded 200 keV, which is almost an order of magnitude higher than previous QPOs observed by other telescopes, indicating that the QPO could not come from the thermal radiation region of the accretion disk. Further studies revealed that the frequency and variability amplitude of the QPO are energy independent and the high-energy QPO precedes the low-energy one.

These results unambiguously conflicted with most currently existing models. Therefore, the scientists proposed that the low-frequency QPO was produced by the precession of a jet near the black hole's event horizon; the precession was probably caused by the frame-dragging effect of general relativity, generated by the rotation of the black hole.

Jets are high-speed matter streams moving at close to the speed of light. Plenty of jets have been observed in black hole binaries and distant quasars hosting supermassive black holes (i.e., those of millions to tens of billions of solar masses) in the radio, optical and X-ray bands. Jets are an important observational characteristic of black hole systems, and are the main means by which black holes influence the surrounding environment via feedback when swallowing nearby matter.

Insight-HXMT's discovery is particularly important because it’s the first time a jet has been found only hundreds of kilometers away from a black hole (i.e., several times the black hole’s event horizon). As the closest relativistic jet observed in a black hole so far, the finding is of great significance for studying the relativistic effects, dynamical processes and radiation mechanisms.

The Institute of High Energy Physics proposed the Insight-HXMT satellite project and leads the development of its payloads, ground application system and scientific research. The China Academy of Space Technology, Tsinghua University, the National Space Science Center of CAS and Beijing Normal University have also participated in the project and have made important contributions.