It's not uncommon for asteroids to pass relatively close to Earth, but it's rare that we actually get the chance to witness them as they soar by. Sometimes, researchers don't even know about near-Earth objects until after they have passed, but astronomers discovered Asteroid 2020 SW on Friday, ahead of its visit to Earth.

The asteroid will make its closest approach to our planet on Thursday. Eager skywatchers have the unique opportunity to witness 2020 SW's close approach via a live feed, courtesy of the Virtual Telescope Project, starting on Wednesday at 6 p.m. ET.

Dr. Paul W. Chodas, the director of the Center for Near-Earth Object Studies (CNEOS) at NASA's Jet Propulsion Laboratory, told CBS News on Tuesday that the asteroid will be too faint to see with the naked eye, but viewers with 12-inch telescopes should be able to spot it. "It will be moving quite fast, and the amateur would have to know precisely where to look to find it" by using a star map, Chodas said.

SW 2020 will get pretty close to Earth, but Chodas said it has "no chance at all" of colliding with us. He said it will come within about 14,000 miles of the planet's surface.

"Although it's not on an impact trajectory with Earth, if it were, the space rock would almost certainly break up high in the atmosphere, becoming a bright meteor known as a fireball," NASA said. 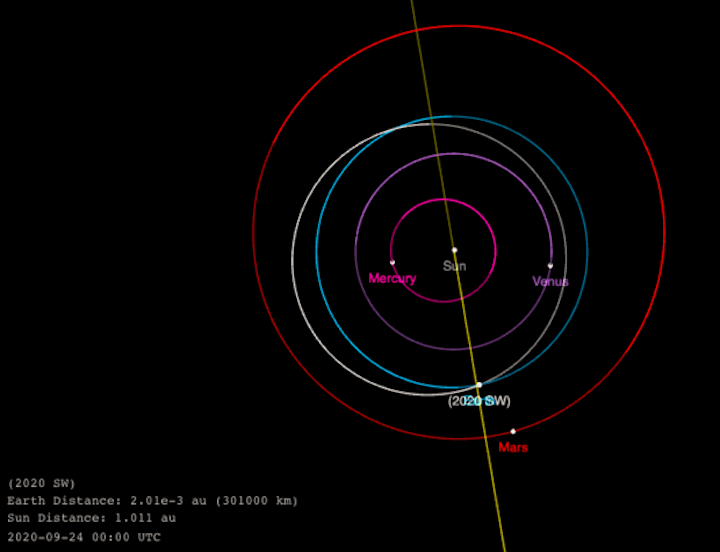 For perspective, the moon is about 240,000 miles away, and the satellites used for television broadcasting and weather are about 23,000 miles away.

The asteroid is also quite small, measuring somewhere between 15 feet and 30 feet in diameter, according to the CNEOS. It's so small that Earth's gravity will likely change its trajectory when it zips by at around 7:12 a.m. E.T. on Thursday, over the Southeastern Pacific Ocean.

When the asteroid returns in 2041, it will have a much more distant approach, Chodas said.

In August, asteroid 2020 QG became the closest-ever to Earth, getting within about 1,830 miles of the planet and surviving. It wasn't discovered until six hours after it passed over the southern Indian Ocean.

Another asteroid is expected to make a close approach on November 2, just one day before the presidential election in the U.S. Even if that asteroid, 2018 VP1, did hit Earth's atmosphere, it would be too small to do any damage, according to NASA.