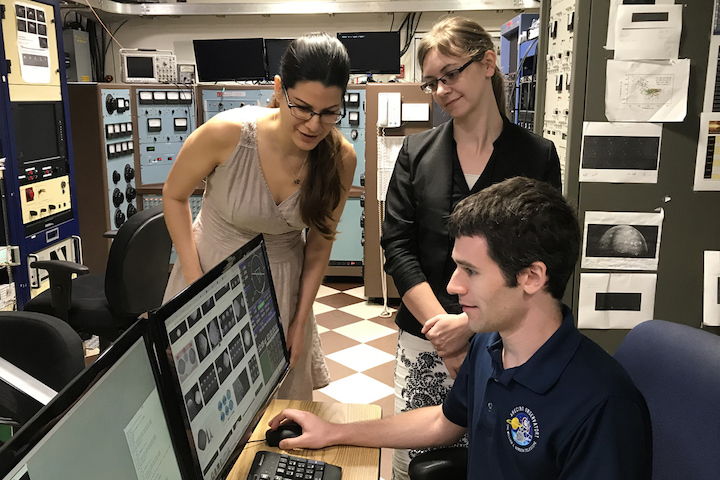 The Earth has one less asteroid to worry about thanks to the research of an international team of scientists at the Arecibo Observatory in Puerto Rico.

Asteroid 2020 NK1 was spotted in early July by the Asteroid Terrestrial-impact Last Alert System (ATLAS) survey team at the University of Hawaii. Little was known about the asteroid, making it difficult to predict exactly where the asteroid would travel in the future. It was estimated to be 1,600 feet in diameter, about the length of five football fields. Before the Arecibo observations, 2020 NK1 was calculated to be one of the biggest threats out of all known asteroids on NASA’s list of potential impactors, with about one chance in 70,000 of impacting the Earth between 2086 and 2101.

Arecibo’s Planetary Radar Group made it a priority to observe 2020 NK1 when it came within range – within 5 million miles – of the facility’s powerful instruments. In this case, the time period was brief, July 30-31, just about the same time Tropical Storm Isaias was expected to slam into the island.

The observatory shut down to prepare for the storm, and as soon as it passed the team jumped into action to detect and study the asteroid. Even as parts of the island lost power and damage was assessed, the Arecibo team was able to determine the asteroid’s shape, orbit and motion.

“Fortunately, the storm passed quickly without damage to the telescope or the radar system, and the maintenance and electronics teams were able to activate the telescope from hurricane lockdown in time for the observations,” says Sean Marshall, an observatory scientist who led the team during the radar observations.

The team of scientists and telescope operators was able to observe the asteroid for two and half hours, collecting precise measurements of the asteroid’s speed and distance from Earth as well as high-resolution images of the asteroid. “These measurements greatly improve our knowledge of 2020 NK1’s orbit and allow for predictions of its future whereabouts for decades to come,” says Patrick Taylor, a Texas scientist at the Lunar and Planetary Institute, part of Universities Space Research Association, who participated in the observation remotely.

The observations showed the asteroid is not expected to get close enough to Earth to pose a danger in the future, with its closest approach coming in 2043 when it will pass about 2.25 million miles from Earth – or more than 9 times farther away than the Moon, the team concluded.

The obtained radar images reveal an elongated shape and a diameter along its longest axis of approximately .6 mile.

“This event was a great example of the important role that the Arecibo radar system plays in planetary science and planetary defense. It shows that we have very quick response times and high-precision range, motion, and-size measurement capabilities, in spite of storms, the COVID-19 pandemic and earthquakes with which Puerto Rico has dealt with this year,” says Anne Virkki, the head of the Planetary Radar group at the Arecibo Observatory.

2020 NK1 is one of many Potentially Hazardous Objects (PHO) that NASA tracks. Asteroids are considered PHOs if they are bigger than 500 feet in diameter and come within 5 million miles of the Earth’s orbit. No known PHOs pose an immediate danger to the Earth, but observations like those conducted at the Arecibo Observatory are used to determine their future trajectories and risk.

Arecibo runs a program supported by a NASA grant to observe and characterize near-Earth objects that pose a potential hazard to Earth or that could be candidates for future space missions.

The observatory is home to the most powerful and most sensitive planetary radar system in the world, which means it is also a unique tool available to analyze NEOs, such as asteroids and comets. The knowledge gained from radar observations helps NASA’s Planetary Defense Coordination Office determine which objects pose significant risks, and when and what to do to mitigate them. NASA officials can also use the information to determine which objects are the most viable for science missions – landing on an asteroid is not equally easy for all of them.

Other team members participating in the radar observation of 2020 NK1 were Flaviane Venditti, Israel Cabrera and Juan Marrero at Arecibo. Virkki and Dylan Hickson, also from Arecibo, participated in the data analysis.

UCF manages the NSF facility under a cooperative agreement with Universidad Ana G. Méndez and Yang Enterprises Inc. The Arecibo Planetary Radar Project is fully supported by NASA’s Near Earth Object Observations Program in NASA’s Planetary Defense Coordination Office through a grant awarded to UCF. Arecibo has played a role in analyzing NEOs for decades, observing up to 130 objects per year.