For the first time, astronomers have observed a conveyor belt from the outskirts of a star-forming dense cloud directly depositing material near a pair of young forming stars. Scientists at the German Max Planck Institute for Extraterrestrial Physics (MPE) and the French Institut de Radioastonomie Millimétrique (IRAM) found that gas motions in the conveyor belt, dubbed a 'streamer', mainly obey the gravitational pull of the innermost part of the core, near the protostar pair.  The streamer delivers a large amount of gas with chemicals recently produced in the mother cloud surrounding the star-forming region directly to the young protostars at the center of the core.  These results are striking evidence that the large-scale environment around forming stars has an important influence on small-scale disk formation and evolution. 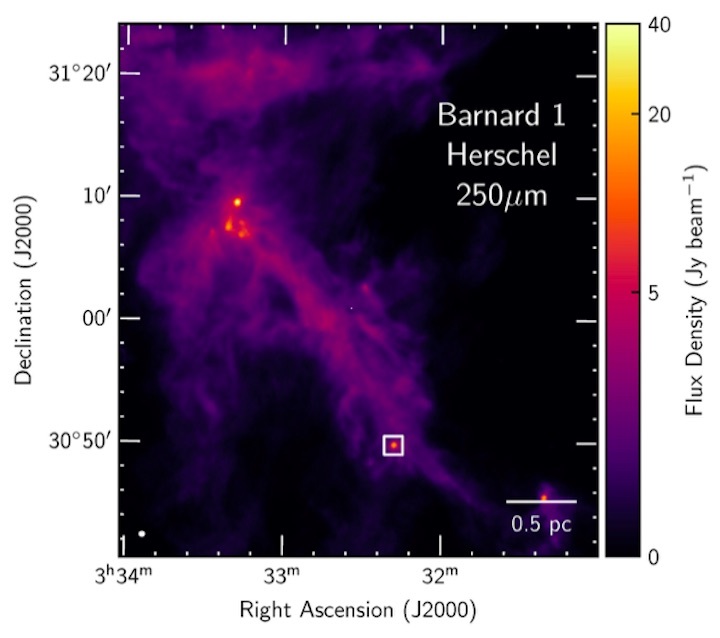 In the general picture of star formation, a dense and cold region (called an envelope) forms inside a much larger and fluffier molecular cloud.  Cloud material swirls and flows inwards towards the center of the envelope, where a future star will be born, the material becomes even more dense and flattens into a disk.  Young protostars at the center of the disk feed and gain their mass directly from the disk.  Now, for the very first time, a bright streamer of material connecting the outermost part of the envelope to the inner region where disks form has been observed in the Perseus Molecular Cloud. With the streamer helping to resupply the disk-scale region with more material as it is consumed by the binary system, the mother cloud can continue to help the young protostars and their protoplanetary disks to grow.

"Numerical simulations of disk formation usually focus on single protostar systems," explains Jaime Pineda from MPE, who lead the study.  "Our observations take the idea one step further, by studying a streamer of chemically fresh material from large distances down to scales where we expect a disk to form around a close pair of young protostars."  The astronomers used the Northern Extended Millimeter Array (NOEMA) to study the young Per-emb-2 (IRAS 03292+3039) proto-stellar binary system. The binary system has shown some variability or flickering in past observations, hinting that it may be an interesting target to study the impact of the environment on small scale star formation. 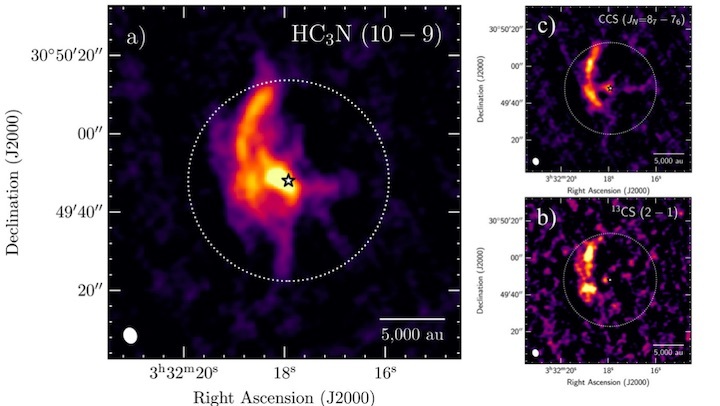 The team observed several molecules, which allowed them to measure the gas motions and discover a flow of material along the streamer from the outer regions of the envelope at a distance of about 10,500 AU down to the disk forming scales.  Both the locations and the speed of the gas were well matched by a theoretical model of a stream of material free-falling from large to small scales, confirming that the streamer's dynamics are controlled by the most dense central region of the system. "It's not that often that theory and observations match up so clearly. We were excited to see this confirmation of what the telescope's images were trying to tell us," says co-author Dominique Segura-Cox from MPE. Estimates of the mass of material streamed into the inner core range from 0.1 to 1 solar mass, which is a substantial fraction of the total mass in the dense star-forming dense cloud (about 3 solar masses). 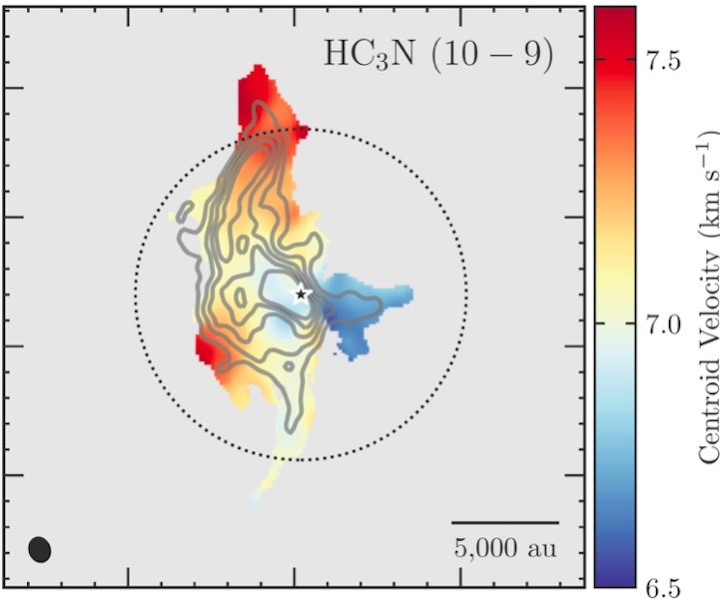 “The streamer must indeed bring in chemically fresh material from the outer regions on a relatively short timescale,” adds Pineda. “The clear identification of such a large reservoir of fresh material in almost free-fall is remarkable.” This clearly shows that new material might shape the morphology and motions of the gas in young stellar systems. “The chemical composition of the growing and evolving protoplanetary disks will also be affected by this new phenomenon.”, concludes Paola Caselli, director at MPE and part of the team. “The molecule which allowed us to discover the streamer has three carbon atoms (HCCCN), which will then be available to enrich organic chemistry (on its way toward pre-biotic compounds) during the phase of planet assembly.” This new way to deliver material to the central region has important implications on the way young disks are formed and grow. However, it remains unclear how frequent and for how long this process could occur in the evolution of young stellar systems, so more detailed observations of young proto-stars are needed.