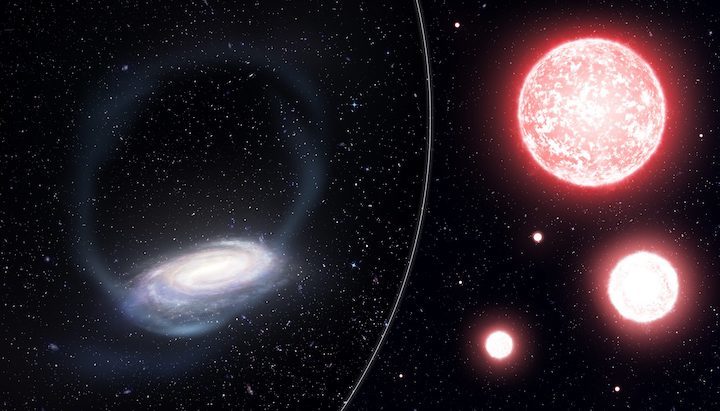 Artist’s impression of the thin stream of stars torn from the Phoenix globular cluster, wrapping around our Milky Way (left). For the study, the astronomers targeted bright Red Giant stars, to measure the chemical composition of the disrupted Phoenix globular cluster (artist’s impression on right). Credit: James Josephides (Swinburne Astronomy Productions) and the S5 Collaboration.

Flagstaff, AZ. – An international team of astronomers, including Lowell Observatory’s Dr. Kyler Kuehn, has discovered the remnant of an ancient collection of stars that was torn apart by our own galaxy, the Milky Way, more than two billion years ago.

The extraordinary discovery of this shredded ‘globular cluster’ is surprising, as the stars in this galactic archaeological find have much lower quantities of heavier elements than in other such clusters. The evidence strongly suggests the original structure was the last of its kind, a globular cluster whose birth and life were different from those remaining today.

Our Galaxy is home to about 150 globular clusters, each a ball of a million or so stars that orbit in the Galaxy’s tenuous stellar halo. These globular clusters are old and have witnessed the growth of the Milky Way over billions of years.

The study, published in Nature, was led by University of Sydney PhD student, Zhen Wan, and his supervisor, Professor Geraint Lewis, as part of the S5 international collaboration.

Using the Anglo-Australian Telescope in outback New South Wales, this collaboration measured the speeds of a stream of stars in the Phoenix constellation, revealing them to be remnants of a globular cluster that was pulled apart by the gravity of the Milky Way about two billion years ago.

Wan said: “Once we knew which stars belonged to the stream, we measured their abundance of elements heavier than hydrogen and helium; something astronomers refer to as metallicity. We were really surprised to find that the Phoenix Stream has a very low metallicity, making it distinctly different to all of the other globular clusters in the Galaxy.”

After the Big Bang, only hydrogen and helium existed in any substantial amount in the Universe. These elements formed the first generation of stars many billions of years ago. It is within these and later stellar generations that heavier elements—such as the calcium, oxygen and phosphorous that in part make up bones—were formed.

Observations of other globular clusters have found that their stars are enriched with heavier elements forged in earlier generations of stars. Current formation theories suggest that this dependence on previous stars means that no globular cluster should be found unenriched and that there is a minimum metallicity ‘floor’ below which no cluster can form.

But the metallicity of the Phoenix Stream progenitor sits well below this minimum, posing a significant problem for ideas of globular cluster origins.

Kuehn, one of the founders of the S5 collaboration, remarked, “We can trace the lineage of stars by measuring the different types of chemical elements we detect in them, much like we can trace a person’s connection to their ancestors through their DNA. The most interesting thing about the remains of this cluster is that its stars have much lower abundance of these elements than any others we have seen. It’s almost like finding someone with DNA that doesn’t match any other person, living or dead. That leads to some very interesting questions about the cluster’s history that we’re missing.”

As yet, there is no clear explanation for the origins of the Phoenix Stream progenitor cluster and where it sits in the evolution of galaxies remains unclear. Lewis said: “There is plenty of theoretical work left to do. There are now many new questions for us to explore about how galaxies and globular clusters form, which is incredibly exciting.”