New results from the Kilo-Degree Survey (KiDS) show that the universe is nearly 10 percent more homogeneous than the Standard Model of Cosmology (Λ-CDM) predicts. The latest KiDS map was made with the OmegaCAM on ESO's VLT Survey Telescope at Cerro Paranal in Northern Chile. A group of astronomers led from institutes in the Netherlands, Scotland, England and Germany have described the KiDS-1000 result in five articles, the last three of which appeared online today. They have been submitted for publication in the journal Astronomy & Astrophysics. 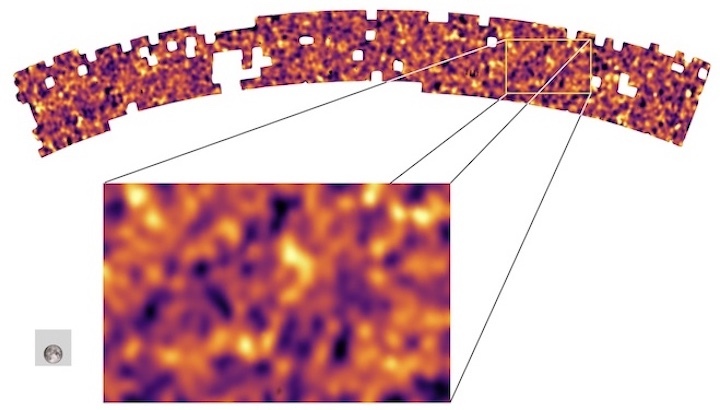 A zoom-in on a part of the KiDS map, showing a patch of the Universe approximately 1.5 x 1 billion lightyears across. In this false-colour image high-density regions of the Universe are shown in yellow, and low-density regions in pink. The grey square shows the size of an individual KiDS image, with a full moon for scale. Over 1000 images make up the KiDS map. Credit: B.Giblin, K.Kuijken and the KiDS team.

The new KiDS map covers about 1000 square degrees, which equates to 5% of the extragalactic sky. 31 million galaxies were used for the analysis. The galaxies are up to 10 billion light years away, which means their light was emitted when our Universe was less than half its present age.

KiDS uses the galaxies to map the distribution of matter in the Universe. This is done through weak gravitational lensing, where the light from distant galaxies is slightly deflected by the gravitational effect of large amounts of matter, such as galaxy clusters. That effect is used to determine the "clumpiness" of the distribution of the galaxies. This concerns all matter in the universe, of which more than 90 percent consists of invisible dark matter plus invisible tenuous gas.

Over time, the gravity of matter in the Universe makes it less and less homogeneous; areas with a little more mass than average attract matter from their surroundings, so increasing the contrast. Meanwhile the expansion of the Universe counteracts this growth. Both of these processes are gravity driven and are therefore of great importance for testing the Standard Model of Cosmology (Λ-CDM), which fairly accurately predicts how density variations increase with the age of the universe.

However, the new KiDS results show a discrepancy: the universe is nearly 10 percent more homogeneous than the standard model predicts.

Dr. Marika Asgari, from the University of Edinburgh, who co-led the analysis, calls the result "intriguing". "The standard model of Cosmology relies on rather mysterious physics that we call dark matter and dark energy. Scientists have to test this remarkable model in as many ways as possible, and that is exactly what we are doing."

The KiDS results may indicate small cracks in the standard model, just like another discrepancy in the expansion rate of the Universe, the so-called Hubble constant. Dr. Tilman Tröster (University of Edinburgh): "The question is whether these can be solved with a small adjustment, for example with a somewhat more complex behavior of dark matter than the simple hypothesis of totally inert 'cold dark matter'."

Leiden professor and KiDS lead Koen Kuijken cannot say whether this will eventually lead to a fundamentally different theory, for example replacing Einstein's General Theory of Relativity with a new one. "For now, I consciously try to stay away from possible theoretical interpretations, and focus on the measurements and how to make them as accurate as possible."

Prof. Hendrik Hildebrandt (Ruhr University Bochum) adds: "As an observing cosmologist, you try to remain impartial and make the measurements as accurate as possible without theoretical prejudices. One thing is clear, we live in exciting times!"

The team will need more data to be absolutely sure about the results. "There is a 1 in a 1000 chance that our findings could be caused by us just having looked at a particularly unusual part of the Universe," says Dr. Benjamin Joachimi (University College London).

In one to two years, the final 'legacy' KiDS map will be published, 30% larger than the current one. It will include all KiDS observations.

Two other projects, one American and one Japanese, are also working on similar analyses from other observatories. From 2022, the baton will be passed on to even more powerful telescopes: the Rubin telescope, which will be more than 60 times as powerful as the VST, and the Euclid satellite, which will take much sharper images from outside the atmosphere than is possible from the ground.

Edinburgh Professor Catherine Heymans, says: "With these two new facilities, we will chart the dark matter across the full sky and confront a wide range of different theoretical models to truly understand the mysterious dark side of our Universe."