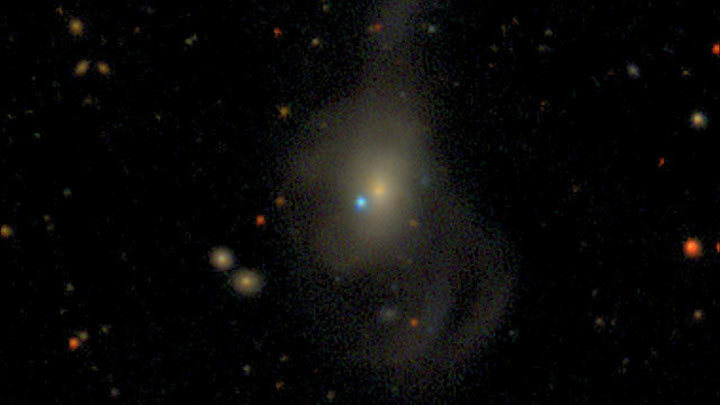 For just the second time ever, astrophysicists have spotted a spectacular flash of ultraviolet (UV) light accompanying a white dwarf explosion.

An extremely rare type of supernova, the event is poised to offer insights into several long-standing mysteries, including what causes white dwarfs to explode, how dark energy accelerates the cosmos and how the universe creates heavy metals, such as iron.

“The UV flash is telling us something very specific about how this white dwarf exploded,” said Northwestern University astrophysicist Adam Miller, who led the research. “As time passes, the exploded material moves farther away from the source. As that material thins, we can see deeper and deeper. After a year, the material will be so thin that we will see all the way into the center of the explosion.”

At that point, Miller said, his team will know more about how this white dwarf — and all white dwarfs, which are dense remnants of dead stars — explode.

The paper was published today (July 23) in The Astrophysical Journal.

Miller is a fellow in Northwestern’s Center for Interdisciplinary Exploration and Research in Astrophysics (CIERA) and program director of the Legacy Survey of Space and Time Corporation Data Science Fellowship Program.

Common event with a rare twist

Using the Zwicky Transient Facility in California, researchers first spotted the peculiar supernova in December 2019 — just a day after it exploded. The event, dubbed SN2019yvq, occurred in a relatively nearby galaxy located 140 million light-years from Earth, very close to tail of the dragon-shaped Draco constellation.

Within hours, astrophysicists used NASA’s Neil Gehrels Swift Observatory to study the phenomenon in ultraviolet and X-ray wavelengths. They immediately classified SN2019yvq as a type Ia (pronounced “one-A”) supernova, a fairly frequent event that occurs when a white dwarf explodes.

“These are some of the most common explosions in the universe,” Miller said. “But what’s special is this UV flash. Astronomers have searched for this for years and never found it. To our knowledge, this is actually only the second time a UV flash has been seen with a type Ia supernova.”

The rare flash, which lasted for a couple days, indicates that something inside or nearby the white dwarf was incredibly hot. Because white dwarfs become cooler and cooler as they age, the influx of heat puzzled astronomers.

A white dwarf is a very dense star that has exhausted all of its nuclear fuel.

“The simplest way to create UV light is to have something that’s very, very hot,” Miller said. “We need something that is much hotter than our sun — a factor of three or four times hotter. Most supernovae are not that hot, so you don’t get the very intense UV radiation. Something unusual happened with this supernova to create a very hot phenomenon.”

Miller and his team believe this is an important clue to understanding why white dwarfs explode, which has been a long-standing mystery in the field. Currently, there are multiple competing hypotheses. Miller is particularly interested in exploring four different hypotheses, which match his team’s data analysis from SN2019yvq.

Potential scenarios that could cause a white dwarf to explode with a UV flash are:

“Within a year,” Miller said, “we’ll be able to figure out which one of these four is the most likely explanation.”

Once the researchers know what caused the explosion, they will apply those findings to learn more about planet formation and dark energy.

Because most of the iron in the universe is created by type Ia supernovae, better understanding this phenomenon could tell us more about our own planet. Iron from exploded stars, for example, formed the core of all rocky planets, including Earth.

“If you want to understand how the Earth formed, you need to understand where iron came from and how much iron was needed,” Miller said. “Understanding the ways in which a white dwarf explodes gives us a more precise understanding of how iron is created and distributed throughout the universe.”

White dwarfs already play an enormous role in physicists’ current understanding of dark energy as well. Physicists predict that white dwarfs all have the same brightness when they explode. So type Ia supernovae are considered “standard candles,” allowing astronomers to calculate exactly how far the explosions lie from Earth. Using supernovae to measure distances led to the discovery of dark energy, a finding recognized with the 2011 Nobel Prize in Physics.

“We don’t have a direct way to measure the distance to other galaxies,” Miller explained. “Most galaxies are actually moving away from us. If there is a type Ia supernova in a distant galaxy, we can use it to measure a combination of distance and velocity that allows us to determine the acceleration of the universe. Dark energy remains a mystery. But these supernovae are the best way to probe dark energy and understand what it is.”

“At the moment, when measuring distances, we treat all of these explosions as the same, yet we have good reason to believe that there are multiple explosion mechanisms,” he said. “If we can determine the exact explosion mechanism, we think we can better separate the supernovae and make more precise distance measurements.”

The paper, “The spectacular ultraviolet flash from the peculiar type Ia supernova 2019yvq,” was partially supported by the Large Synoptic Survey Telescope Corporation, the Brinson Foundation and the Moore Foundation.