For the first time, astronomers have imaged multiple planets orbiting a Sun-like star.

The European Southern Observatory's Very Large Telescope (VLT) has captured an image of a young, Sun-like star and its two companions. Direct images of exoplanets are nothing new, but this is the first time researchers have directly seen multiple planets orbiting a star like our own. 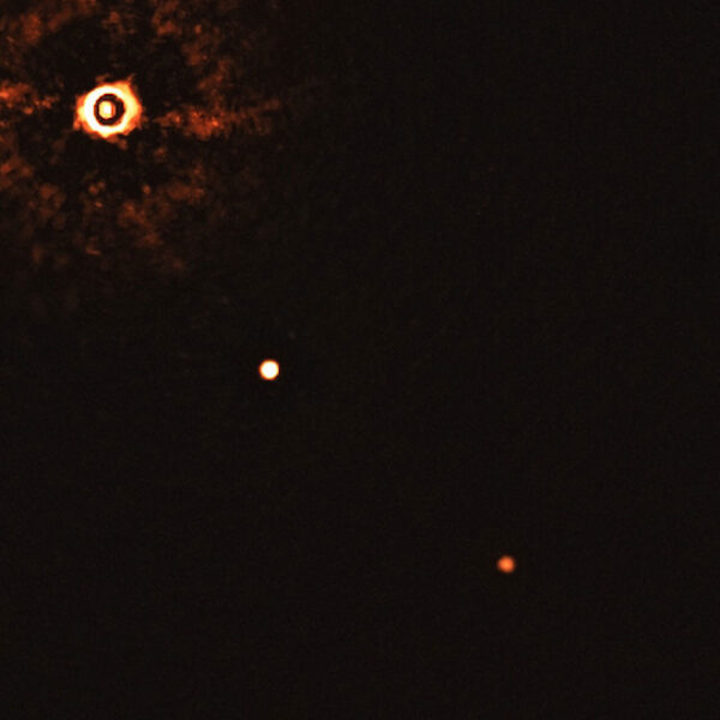 The star is only 17 million years old, a “very young version of our own Sun,” says Alexander Bohn (Leiden University, The Netherlands), who led the team that reported the results that will appear in Astrophysical Journal Letters (preprint available here).

But the system, dubbed TYC 8998-760-1, is nothing like our solar system. One of the star's companions straddles the line that defines planets, with a mass 14 times Jupiter's; the other has a mass of six Jupiters. Both orbit far from the star, about 160 and 320 times the average distance between Earth and the Sun. That puts them more than four times farther out than Pluto is from the Sun.

The Spectro-Polarimetric High-contrast Exoplanet Research (SPHERE) instrument on the VLT blocks the host star using a coronagraph, then uses a technique called polarimetery to further separate the starlight from the light coming from the planets. SPHERE images infrared radiation, so the light from these planets is not reflected starlight but rather the warm glow leftover from their formation.

Perhaps it's not so surprising that the system is as strange as it is — SPHERE wouldn't have been able to image this system directly had it not been so young and the planets so far out. Nevertheless, the planets' orbital distance begs the question, did they form where they are? Or did they migrate to their current location?

In computer simulations, the researchers show that mostly circular orbits at these distances are stable, but great elongations to the orbits would cause them to be unstable and therefore likely short-lived. So Bohn and his colleagues suggest that the planets probably formed in place, unless there was some very specific (and therefore less likely) scenario that ejected the planets to their far-out orbits.