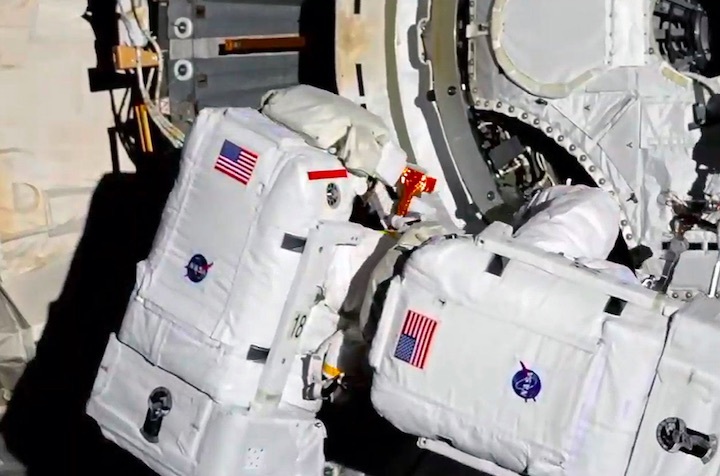 NASA astronauts Bob Behnken (at left) and Chris Cassidy work to scrape away debris from the end cone of the Tranquility node to prepare the International Space Station for the addition of its first commercial airlock during a July 21, 2020 spacewalk. (NASA TV)

Bob Behnken, who arrived at the space station on SpaceX's Crew Dragon DM-2 spacecraft in late May, and Expedition 63 commander Chris Cassidy performed their fourth spacewalk together on Tuesday (July 21). The 5-hour and 29-minute excursion marked the tenth extravehicular activity, or EVA, by both crewmates, tying the record for the most spacewalks conducted by an American, as was also achieved by two other astronauts.

"Does the tenth one feel like the first one?" Behnken asked Cassidy after the EVA was complete.

"No, a little more comfortable on the tenth one than the first one," replied Cassidy. "The view is always amazing, though."

Behnken and Cassidy began Tuesday's spacewalk at 7:12 a.m. EDT (1112 GMT), with a list of maintenance tasks to tackle.

Quickly accomplishing their first jobs, the installation of a tool kit at the base of the station's Canadarm2 robotic arm and photographing their worksite from a previous spacewalk to upgrade the batteries for the station's power system, Behnken and Cassidy then worked on removing two devices called "H-Fixtures" that assisted in handling the station's solar arrays before the panels were launched.

Behnken had attempted to remove one of the fixtures on an earlier spacewalk but was unable to pry it loose. For this EVA, the astronauts were prepared with a combination of tools, including a power drill (pistol grip tool), tape-wrapped pliers and a long-handled wrench, as well as a wedge that was 3D printed on board the space station for this task (though it turned out to be not needed).

"It took a little bit of wriggling and kind of pushing," Cassidy said after releasing the first H-Fixture from a canister at the base of one of the arrays. "That was a pretty slick use of available tools on the space station."

"It really takes some oomph," reported Behnken before freeing the second fixture.

With that work complete two hours into the spacewalk, the astronauts stowed their tools, repositioned a portable foot restraint and reset their tethers before making their way over to the station's Tranquillity Node 3 to begin preparing the module for the installation of the outpost's first commercial airlock.

Nanoracks' Bishop airlock, which derives its name from the diagonally-moving chess piece, will increase the capability of the station to deploy commercial cubesats and other small satellites. The bell jar-shaped module is slated to be launched on a SpaceX Dragon cargo spacecraft later this year.

Behnken and Cassidy worked at Tranquility's end cone, configuring it for the addition of the Bishop airlock. The two astronauts first removed a pressurized mating adapter cover that had been installed to replace a lost thermal shield.

"The question is, do we try to make it one more fold or not?" Behnken asked as he and Cassidy worked to stow the bulky, pie-shaped cover.

"End of the 'pizza,' towards the crust," replied Cassidy.

The two spacewalkers also tied back three thermal covers and scraped off a small patch of debris, clearing the end cone for the airlock.

Moving on to their final tasks, both Cassidy and Behnken re-routed cables for a new wireless data system and removed a filter from the lens of a camera.

Behnken and Cassidy re-entered and began re-pressurizing the station's Quest airlock at 12:41 p.m. EDT (1641 GMT), marking the end of their spacewalk.

In a press release preceding Tuesday's EVA, NASA identified the event as the 300th spacewalk conducted by American astronauts since Ed White exited his Gemini 4 spacecraft in 1965. To reach that total, the space agency redefined what constitutes a U.S. EVA, including for the first time seven trash jettisons that the Apollo astronauts performed while still on the moon.

Tuesday's spacewalk was also the 231st EVA in support of the assembly and maintenance of the International Space Station. Since 1998, astronauts and cosmonauts have spent 60 days, 12 hours and 3 minutes working outside of the orbiting laboratory.

Having now performed 10 spacewalks each, Behnken and Cassidy matched the U.S. record for the most EVAs performed by an American first set by Michael Lopez-Alegria in 2007 and then tied by Peggy Whitson in 2017. Behnken now has logged 61 hours and 10 minutes working in the vacuum of space. Cassidy now has spent a total of 54 hours and 51 minutes spacewalking. 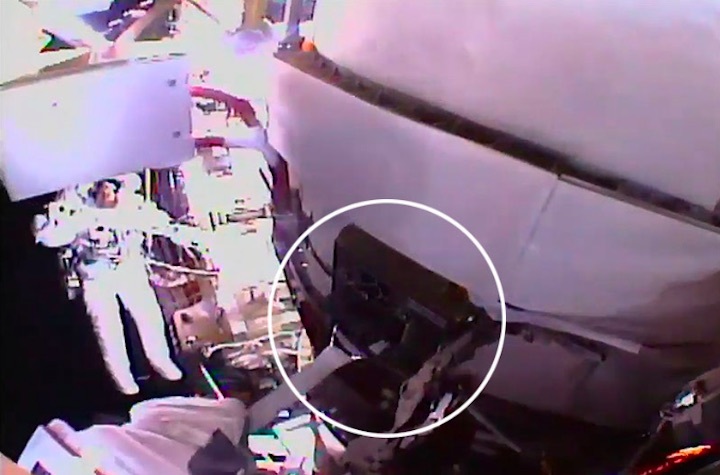 NASA astronaut Bob Behnken uses a wrench and pliers to free an "H-Fixture" (as circled) from the base of one of the International Space Station's solar arrays as Chris Cassidy looks on during the 300th American spacewalk on Tuesday, July 21, 2020. (NASA TV) 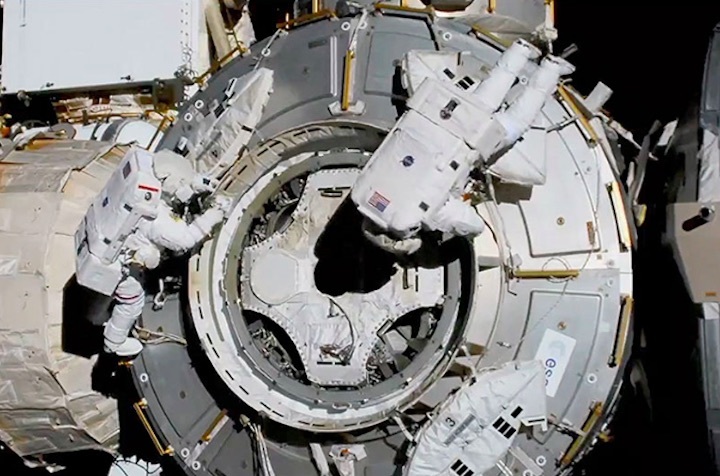 NASA astronauts Bob Behnken (at left) and Chris Cassidy tie back thermal covers on the end cone of the Tranquility node to prepare for the addition of Nanoracks' Bishop airlock during a July 21, 2020 spacewalk outside the International Space Station. (NASA TV) 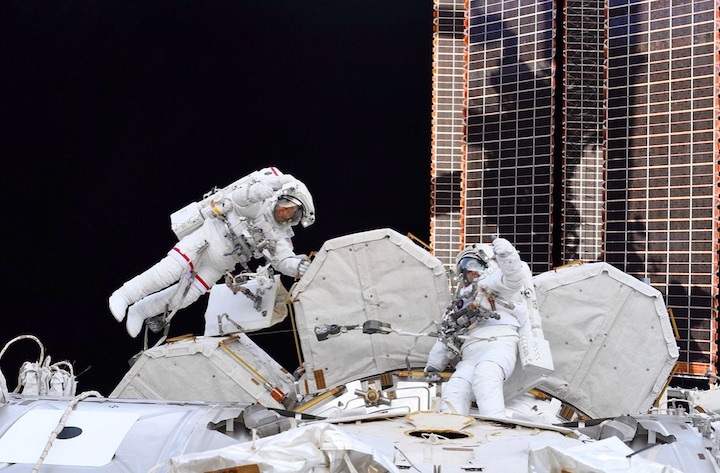 NASA astronauts Bob Behnken (at left) and Chris Cassidy pause for a photo during their July 21, 2020 spacewalk outside of the space station. (NASA)