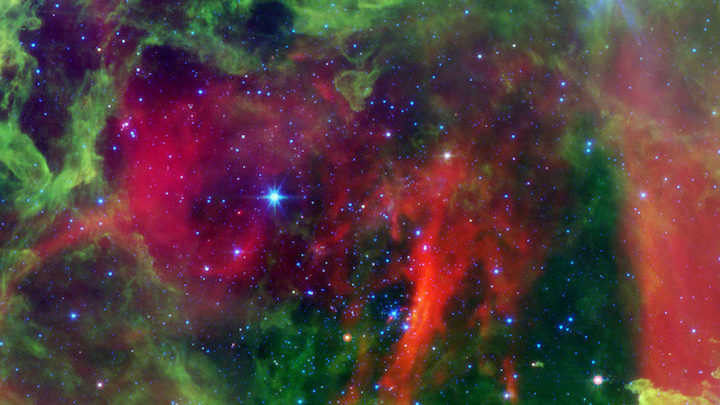 Many astronomers think that a loose association of thousands of stars, like the cluster NGC 2244 in the Rosette Nebula shown here, is where the sun was born. A new study suggests there’s another possibility.

The sun could come from a large, loose-knit clan or a small family that’s always fighting.

New computer simulations of young stars suggest two pathways to forming the solar system. The sun could have formed in a calm, large association of 10,000 stars or more, like NGC 2244 in the present-day Rosette Nebula, an idea that’s consistent with previous research. Or the sun could be from a violent, compact cluster with about 1,000 stars, like the Pleiades, researchers report July 2 in the Astrophysical Journal.

Whether a star forms in a tight, rowdy cluster or a loose association can influence its future prospects. If a star is born surrounded by lots of massive siblings that explode as supernovas before a cluster spreads out, for example, that star will have more heavy elements to build planets with (SN: 8/9/19).

To nail down a stellar birthplace, astronomers have considered the solar system’s chemistry, its shape and many other factors. Most astronomers who study the sun’s birthplace think the gentle, large association scenario is most likely, says astrophysicist Fred Adams of the University of Michigan in Ann Arbor, who was not involved in the new work.

But most previous studies didn’t include stars’ motions over time. So astrophysicists Susanne Pfalzner and Kirsten Vincke, both of the Max Planck Institute for Radio Astronomy in Bonn, Germany, ran thousands of computer simulations to see how often different kinds of young stellar families produce solar systems like ours.

The main solar system feature that the pair looked for was the distance to the farthest planet from the star. Planet-forming disks can extend to hundreds of astronomical units, or AU, the distance between the Earth and the sun (SN: 7/16/19). Theoretically, planets should be able to form all the way to the edge. But the sun’s planetary material is mostly packed within the orbit of Neptune.

“You have a steep drop at 30 AU, where Neptune is,” Pfalzner says. “And this is not what you expect from a disk.”

In 2018, Pfalzner and her colleagues showed that a passing star could have truncated and warped the solar system’s outer edge long ago. If that’s what happened, it could help point to the sun’s birth environment, Pfalzner reasoned. The key was to simulate groupings dense enough that stellar flybys happen regularly, but not so dense that the encounters happen too often and destroy disks before planets can grow up.

“We were hoping we’d get one answer,” Pfalzner says. “It turned out there are two possibilities.” And they are wildly different from each other.

“This paper opens up another channel for what the sun’s birth environment looked like,” Adams says, referring to the violent cluster notion.

The new study doesn’t cover every aspect of how a tight cluster could have affected the nascent solar system. The findings don’t account for how radiation from other stars in the cluster could erode planet-forming disks, for example, which could have shrunk the sun’s disk or even prevented the solar system from forming. The study also doesn’t explain certain heavy elements found in meteorites, which are thought to come from a nearby supernova and so could require the sun come from a long-lived stellar family.

“I think [the research] is an interesting addition to the debate,” Adams says. “It remains to be seen how the pieces of the puzzle fit together.”

Pfalzner thinks that the star cluster would break apart before radiation made a big difference, and there are other explanations for the heavy elements apart from a single supernova. She hopes future studies will be able to use that sort of cosmic chemistry to narrow the sun’s birthplace down even further.

“For us humans, this is an important question,” Pfalzner says. “It’s part of our history.”

Astronomie - Pinning down the sun’s birthplace just got more complicated Our star’s birthplace might have been a tight, stellar cluster, researchers say
163 Views
Created with page4