Note: This is the second part in a recurring series highlighting Berkeley Lab’s ongoing work in international physics collaborations during the pandemic.

The Dark Energy Spectroscopic Instrument (DESI), installed on an Arizona mountaintop, was quickly moving through its testing stages and making headway toward the start of its 5-year observing run as project participants from around the world traveled to attend a DESI collaboration meeting in Tucson, Arizona, in early March.

But as cases of COVID-19 were mounting in the U.S. and other nations around the world, collaboration leaders acted quickly to pull the plug on the in-person meeting – planned from March 9-13, 2020 – and to transition to an online meeting.

“We already had people in the air coming to the U.S. from all parts of the world: France, the U.K., Taiwan, and Korea,” said Michael Levi, DESI project director and a scientist at the U.S. Department of Energy’s Lawrence Berkeley National Laboratory (Berkeley Lab), which is the lead institution for the DESI project.

Meeting organizers helped travelers who had already made the journey to Tucson find ways to return home before the onset of widespread travel restrictions. “No one got stranded,” Levi said. Others were able to cancel their travel plans in time. The hurriedly planned online meeting drew about 200 participants, which was actually higher than the usual in-person head count, he noted.

At that time, it wasn’t yet clear how the spread of COVID-19 would affect daily life in the U.S., or the DESI project itself. The meeting content focused, instead, on the science that would come out of DESI. The instrument will search for new insights into dark energy, responsible for the universe’s mysteriously accelerating expansion, by measuring the light of tens of millions of galaxies to produce the most massive 3D map of the universe. 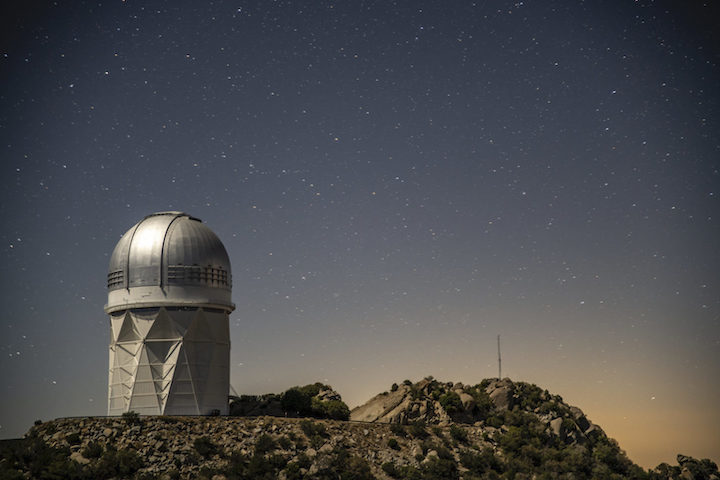 DESI is installed within the dome of the Mayall Telescope at Kitt Peak National Observatory near Tucson, Arizona. (Credit: Marilyn Sargent/Berkeley Lab)

“The meeting wasn’t about the instrument today, it was about the science tomorrow,” Levi noted. “We didn’t quite know what was in store for us. We were still figuring that out at the time.”

But as the virtual meeting progressed, day by day it became more and more clear that the response to COVID-19 would lead to big, unforeseen changes for the U.S., and for DESI and all of its participants.

“By March 13, the last day of the meeting, we realized we would be shutting down the instrument,” Levi said, “which we would do the following Monday. We realized we could no longer run at all.”

In the last two days before this closure, DESI crews raced to use the instrument to capture some night-sky measurements. They succeeded in collecting the light signatures, or spectra, for about 100,000 objects in those final days, and researchers are still poring through this data.

By March 18, crews at the Kitt Peak National Observatory sitewhere DESI is installed had successfully shut down all of DESI’s systems. Kitt Peak is a part of the National Science Foundation’s National Optical-Infrared Astronomy Research Laboratory.

Some of the data collected just before the shutdown would help to validate for federal reviewers that the project had completed its construction phase and was ready to begin a final testing period toward startup once it was brought online again. The federal review, which DESI passed, took place just days after the shutdown.

Despite DESI’s shutdown, Levi said that a variety of project work is still moving forward:

DESI engineers designed this component (upper left), known as a dessicant box, and worked with manufacturers to create its parts. The installed component (marked by a red arrow) will help prevent moisture from developing on DESI lenses. (Credit: Robert Besuner/DESI collaboration)

“We have considerable online and remote-work capabilities,” Levi said. “People are very industrious in getting this work done.”

When the DESI team does receive all of the necessary approvals to proceed with the project, it will happen in stages, Levi noted.

The first phase of DESI’s restart will involve instrument maintenance carried out by crews stationed at the Kitt Peak site, he said. In the next phase, when travel is allowed, Berkeley Lab researchers will travel to the site to turn the instrument back on.

Then, DESI researchers will begin detailed testing of the instrument’s systems to ensure they are working as designed, and in the final phase the instrument will perform night-sky measurements again in preparation for its formal startup.

NERSC is a DOE Office of Science user facility.

Founded in 1931 on the belief that the biggest scientific challenges are best addressed by teams, Lawrence Berkeley National Laboratory and its scientists have been recognized with 13 Nobel Prizes. Today, Berkeley Lab researchers develop sustainable energy and environmental solutions, create useful new materials, advance the frontiers of computing, and probe the mysteries of life, matter, and the universe. Scientists from around the world rely on the Lab’s facilities for their own discovery science. Berkeley Lab is a multiprogram national laboratory, managed by the University of California for the U.S. Department of Energy’s Office of Science.

DOE’s Office of Science is the single largest supporter of basic research in the physical sciences in the United States, and is working to address some of the most pressing challenges of our time. For more information, please visit energy.gov/science.

DESI is supported by the Director, Office of Science, Office of High Energy Physics of the U.S. Department of Energy under Contract No.DE–AC02–05CH1123, and by the National Energy Research Scientific Computing Center, a DOE Office of Science User Facility under the same contract; additional support for DESI is provided by the U.S. National Science Foundation, Division of Astronomical Sciences under Contract No. AST-0950945 to the NSF’s National Optical-Infrared Astronomy Research Laboratory; the Science and Technologies Facilities Council of the United Kingdom; the Gordon and Betty Moore Foundation; the Heising-Simons Foundation; the French Alternative Energies and Atomic Energy Commission (CEA); the National Council of Science and Technology of Mexico; the Ministry of Economy of Spain, and by the DESI Member Institutions. The authors are honored to be permitted to conduct astronomical research on Iolkam Du’ag (Kitt Peak), a mountain with particular significance to the Tohono O’odham Nation.