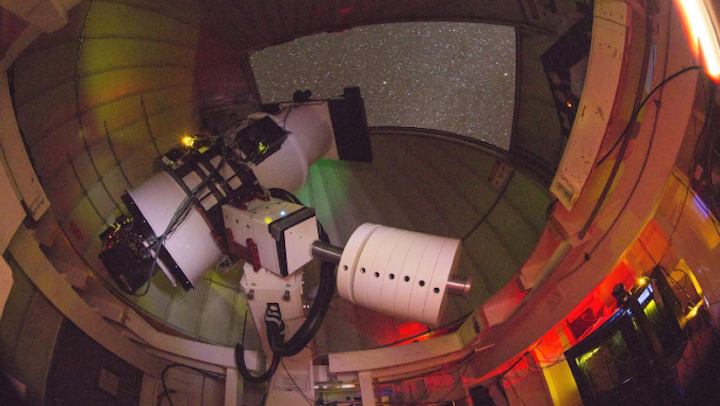 Asteroids and comets are often thought of as distinct types of small bodies, but astronomers have discovered an increasing number of “crossovers.” These objects initially appear to be asteroids, and later develop activity, such as tails, that are typical of comets.

The University of Hawaiʻi Asteroid Terrestrial-impact Last Alert System (ATLAS) is now behind the discovery of the first known Jupiter Trojan asteroid to have sprouted a comet-like tail. The Minor Planet Center (MPC) designated the new discovery as 2019 LD2, found near the orbit of Jupiter. The MPC is the single worldwide location for receipt and distribution of positional measurements of minor planets, comets and outer irregular natural satellites of the major planets. ATLAS is a NASA-funded project using wide-field telescopes to rapidly scan the sky for asteroids that might pose an impact threat to Earth.

Early in June 2019, ATLAS reported what seemed to be a faint asteroid near the orbit of Jupiter. Inspection of ATLAS images taken by collaborators Alan Fitzsimmons and David Young at Queen’s University Belfast revealed its probable cometary nature. Follow-up observations by UH astronomer J.D. Armstrong and student Sidney Moss on June 11 and 13 using the Las Cumbres Observatory global telescope network confirmed the cometary nature of this body.

In July, new ATLAS images caught 2019 LD2 again—now truly looking like a comet, with a faint tail made of dust or gas. The asteroid reappeared in April 2020 during routine ATLAS observations that confirmed it still looked like a comet. Those observations showed that 2019 LD2 has probably been continuously active for almost a year.

Why this asteroid is considered rare

ATLAS has discovered more than 40 comets but what researchers find extraordinary is 2019 LD2’s orbit. The early indication that it was an asteroid near Jupiter’s orbit has now been confirmed through precise measurements from many different observatories. 2019 LD2 is a special kind of asteroid called a Jupiter Trojan, and no object of this type has ever before been seen to spew out dust and gas like a comet.

For more go to the Institute for Astronomy website.