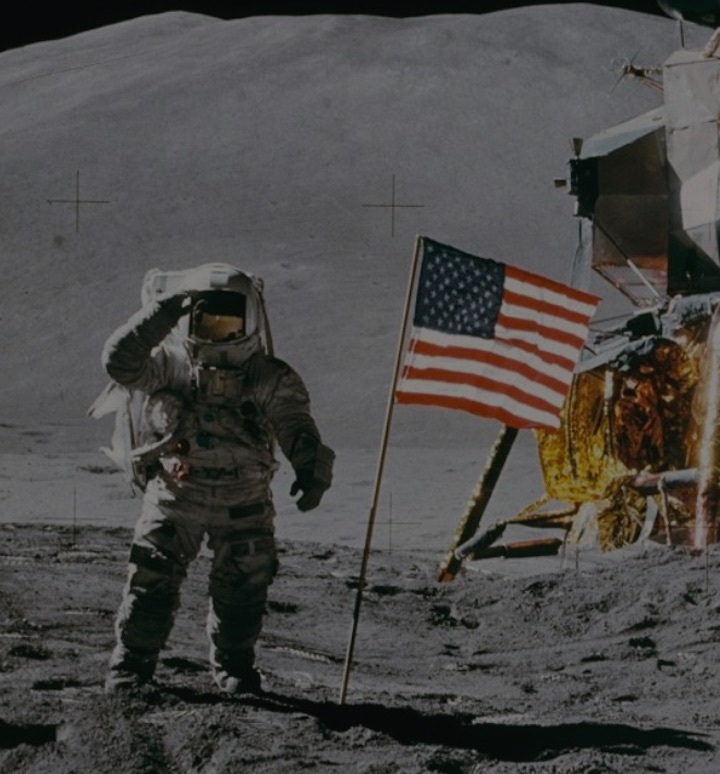 Rather than looking down, the future of archaeology may one day look up to the stars.

The coined term of “space archaeologist” has been applied to archaeologists who use detailed satellite imagery to identify and examine archaeological sites here on earth.

Space archaeologists such as Sarah Parcak have been pioneers in their field, advancing our knowledge of past civilisations and developing community outreach projects like the Global Explorer initiative to identify and protect a dwindling cultural heritage at threat from looting and treasure hunters.

But instead of excavating our terrestrial past, space archaeologists could find themselves one day filtering through the layers of our orbit, the surface of the moon, and the strata of mars for relics of the early innovators that dawned a new era in our species exploration of space.

The near-Earth space environment is cluttered with man-made orbital debris and naturally occurring meteoroid particles. As of 2020, there are around 1,886 satellites currently orbiting the earth, with more than 23,000 orbital debris larger than 10 cm.

The estimated population of debris particles between 1 and 10 cm in diameter is approximately 500,000. The number of particles larger than 1 mm exceeds 100 million. As of January 1, 2020, the amount of material orbiting the Earth exceeded 8,000 metric tons.

NASA’s Orbital Debris Program Office contains downloadable data that allows you to monitor models of the orbital debris (MMOD) and the ongoing problem of debris growth that is a present danger for space exploration today.

One major source of debris was caused by the US and Soviet Union in the 1960’s and 1970’s where both super-powers were testing anti-satellite weapons in orbit. Accidental events have also contributed to the problem with incidents like the 2007 Russian Briz-M booster exploding in orbit.

Another cause of space debris can be attributed to the satellites we place in orbit for communications, weather station monitoring, GPS, and scientific study. When a satellite comes to the end of its operational life, it is normally put onto a trajectory that brings it into the earth’s atmosphere and burns up on re-entry. Satellites in a high orbit will be directed into space into a “graveyard orbit” around 200 miles further out and abandoned. Then there are the nonfunctional satellites that have lost communication with ground control, these have a degrading orbit encircling the earth and pose a risk of further collision creating more debris.

At the end of space stations operating life, like low orbit satellites they are directed into the Earth’s atmosphere and burnt up on re-entry to an area called the spacecraft cemetery, also known as the South Pacific Ocean Uninhabited Area. This area is roughly centred on the “Point Nemo” oceanic pole of inaccessibility – the location furthest from any land – which lies about 2,400 kilometres (1,500 mi) between Easter Island, Pitcairn Island, and Antarctica.

Apart from the International Space Station, there are two redundant stations still in orbit, the Genesis I and II, launched by Bigelow Aerospace in 2006 and 2007, an experimental space habitat to test the long-term viability of inflatable structures in space. The orbital life was originally estimated to be 12 years, but to date, the stations remain in a slowly decaying orbit.

As a species, we have left over 187,400 kilograms (413,100 lb) of material on the Moon, from spacecraft, rovers, containers of urine, flags, footprints, and countless personal items. The vacuum of space perfectly preserves these in situ, ensuring their continued survival for millions of years without any form of degradation that normally occurs with archaeology on Earth.

The first foreign object placed on the lunar service was Luna 2, launched on the 12th September 1959 by the Soviet Union with a further 23 Luna missions leaving spacecraft that either landed, crashed, or were intentionally crashed.

The USA would start exploratory missions from 1962 starting with Ranger 4, followed by another 4 ranger spacecraft. There would be a further 14 spacecraft left on the moon until the Apollo 11 would finally bring mankind to a new frontier. Post-Apollo 11, the USA would send a further 26 vehicles to the moon ranging from Apollo mission modules, rovers, satellites, probes, and LRV’s. 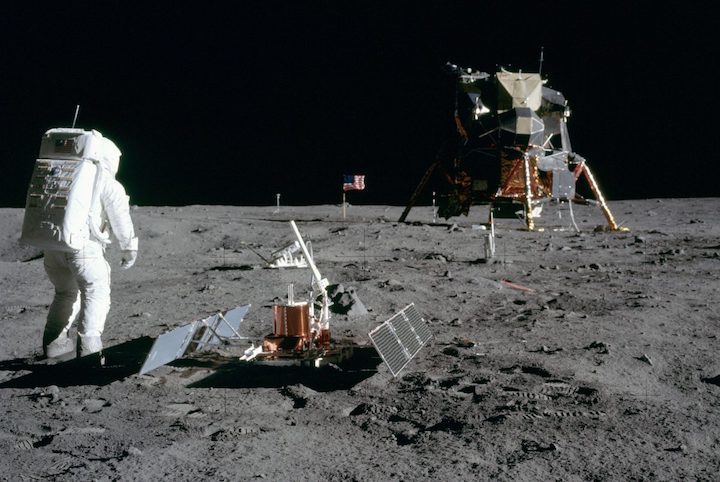 Some items noted from the Apollo missions include the Apollo lunar surface experiments packages, retroreflectors, the United States flags, the commemorative plaques attached to the ladders of the six Apollo Lunar Modules, the silver astronaut pin left by Alan Bean in honor of Clifton C. Williams, the Bible left by David Scott, the Fallen Astronaut statuette and memorial plaque placed by the crew of Apollo 15, the Apollo 11 goodwill messages disc and the golf balls Alan Shepard hit during an Apollo 14 moonwalk.

The Lunar surface is an intact museum and heritage site that provides a unique setting for our early period of space travel from the Soviet Union, the USA, China, Japan, India, and Israel.

The most notable are the Apollo 11 and Apollo 17 landing sites which the USA has proposed a bill to protect, listing them as off-limits, and including close proximity limits for ground-travel and no-fly zones to avoid spraying rocket exhaust or dust onto aging but historic equipment. 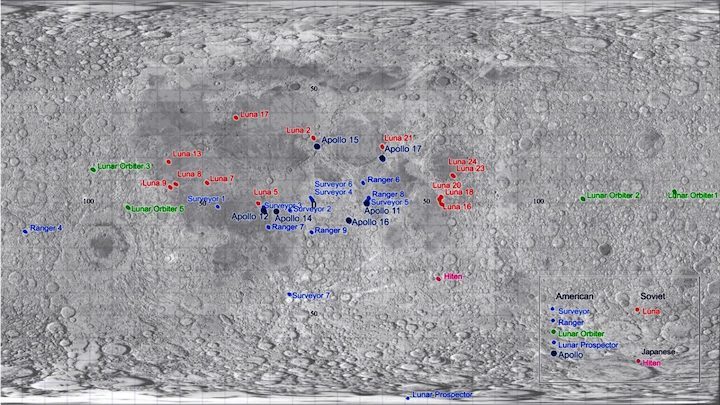 When the Italian Astronomer Giovanni Schiaparelli described seeing canali on the surface of Mars in 1877, many in the English-speaking world began to believe that the canals were artificially created by some ancient civilisation.

Mars was further embellished in the public imagination when in 1976, NASA’s Viking 1 orbiter photographed a geological feature in the Cydonia region that many believed to resemble a humanoid face. Finding a civilisation on Mars would have changed the face of our understanding of the Universe, but atlas, these dreams will have to assigned to a H. G. Wells novel.

Unlike the moon, Mars has an atmosphere and weather system that can cause vast dust storms made from oxidized iron that can last for months at a time blocking out light and envelope optical equipment and solar panels making equipment useless or non-operational for some duration.

The first spacecraft deployed on Mars was the Mars 2 launched by the Soviet Union in 1971, followed by the Mars 3 and Mars 6 missions. The USA launched its first mission, the Viking 1 lander in 1976 followed by several more probes and rovers. Even the United Kingdom safely managed to send a probe to Mars, the Beagle 2 in 2003 but subsequently lost contact when its solar panels failed to deploy.

The missions that followed focused on lander and rover deployment. The Spirit Rover operated for 2210 sols, the Opportunity Rover 5111 sols and the brave Curiosity Rover, launched in 2012 is still in operation today. The last mission to Mars was the InSight lander, sent to the red planet to measure seismic activity and provide accurate 3D models of the planet’s interior and internal heat flow. To date, there are 17 spacecraft on Mars, two remain operational with the remainder either crashed, lost contact, or damaged by atmospheric stresses and friction.

Space offers us a new frontier for the future, one that has preserved a time capsule of each stage in our technological development. As we explore the outer reaches, our descendants may find themselves recovering those first explorers that have paved the way – from the Voyager, Pioneer and New Horizons probes, to the junk we’ve left behind as a civilisation in our ever-expanding pursuit in exploring the cosmos.

Raumfahrt - The Archaeology of Space
658 Views
Created with page4