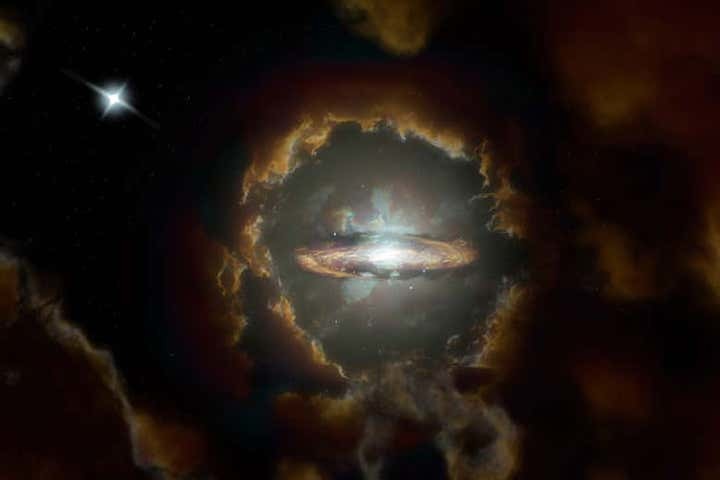 A galaxy from the early universe has been found to be far smoother than expected, which is evidence for a speedy sort of galaxy formation never spotted before. And it could mean that galaxies like the Milky Way may have started taking shape far earlier in the universe’s history than we thought they could.

Our current models of the universe suggest that in the first few billion years after the big bang, galaxies formed as a result of clumps of dark matter attracting hot gas, which eventually formed stars. When young, we expect galaxies formed like this to be lumpy and misshapen.

But that isn’t always the case. Marcel Neeleman at the Max Planck Institute for Astronomy in Germany and his colleagues used the Atacama Large Millimeter/submillimeter Array in Chile to spot a galaxy in the early universe that isn’t lumpy. This one dates to just 1.5 billion years after the big bang.

Instead, it appears to be a smooth, rotating disc that looks more like our own spiral galaxy than the typical galaxies of the early cosmos. Officially called DLA0817g and dubbed the Wolfe Disk by the researchers, it formed 2.5 billion years earlier than the next oldest disc galaxy we have seen.

“The other extremely early galaxies we’ve seen just look like train wrecks, with clumps of gas everywhere, but this one is not like that,” says Neeleman. But if it formed from hot gas, it wouldn’t have had enough time since the big bang to smooth out its clumps and form a defined disc.

Instead, the researchers think it formed via a process called cold accretion, where gas flows smoothly into the galaxy along dense filaments instead of falling in clumps. This process is expected to be gentler, allowing the gas to settle into a disc more quickly in the early universe.

This is the first galaxy that we have seen in the early universe that seems to have formed this way, and we will need to find more to determine if it is a common process. “We don’t think that this is an extraordinary galaxy,” says Neeleman. “We think it’s quite normal and we should be able to find a whole bunch more.”

This newly described galaxy was in place just 1.5 billion years after the Big Bang

That’s much earlier than astronomers thought that this type of galaxy could form. Previous observations show that disk-shaped galaxies — including sprawling, spiral systems like the Milky Way — didn’t show up in large numbers until between 3 billion and 4 billion years after the Big Bang, which occurred about 13.8 billion years ago.

This precocious galaxy’s existence suggests that massive spiral galaxies like the Milky Way can grow up relatively quickly, astronomers report in the May 21 Nature.

By showing that a disk galaxy could form so early in the universe’s history, the new study “challenges the accepted paradigm for how disk galaxies form and evolve in the universe,” says astrophysicist Rachel Somerville of the Flatiron Institute in New York City, who was not involved in the study.

The earliest galaxies probably were made when clumps of invisible dark matterpulled in surrounding gas and dust, forming stars and eventually creating galaxies that were round and blobby, observations and computer simulations suggest (SN: 1/26/18). Theorists reason that assembling those early galaxies was a violent process that scrambled and heated gas. Since hot gas expands, the idea goes, the first galaxies were spherical blobs because they were too hot for the gas to settle into a disk. Only when gas has had lots and lots of time to cool off could it collapse into bright starry disk galaxies (SN: 9/3/18), researchers thought.

In the last 15 years, however, computer simulations have showed that cold streams of gas could sneak into ancient, blobby galaxies, potentially making it easier for disk galaxies to arise more quickly.

To see if that process, called the cold accretion method, actually occurs in the universe, astronomer Marcel Neeleman and colleagues sought the earliest disk galaxies they could find. Most early galaxies are too far away and thus too faint for Earth-based telescopes to catch light from their stars. But sensitive radio telescopes can detect light from even more distant quasars — blazing, white-hot disks surrounding supermassive black holes — filtering through the galaxies’ gas(SN: 7/12/18). A bright quasar behind the early disk galaxy, called DLA0817g, let it show up in silhouette, revealing the galaxy’s contents and structure. 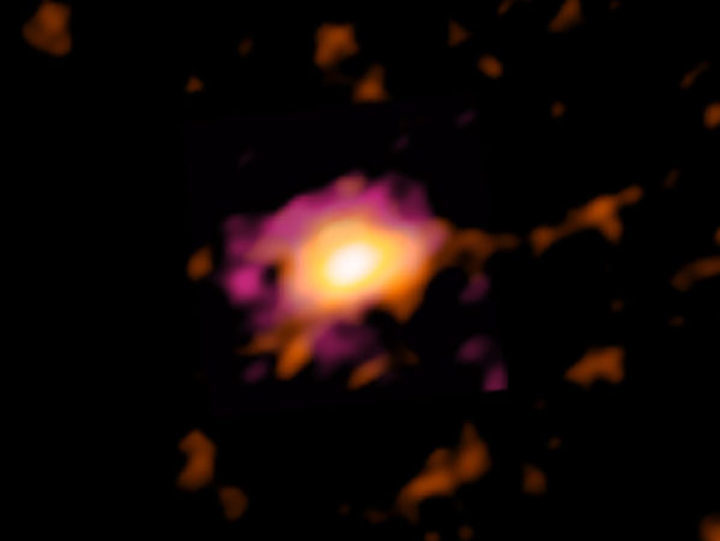 Neeleman, of the Max Planck Institute for Astronomy in Heidelberg, Germany, and his colleagues first saw hints of DLA0817g using the Atacama Large Millimeter/submillimeter Array in Chile, the team reported in 2017. Follow-up observations in 2019 showed that the galaxy is rotating like a record: Half of the galaxy’s gas is moving away from Earth, and half is moving toward us. That motion is a sure sign that the galaxy is a cold, flat rotating disk, and likely has a spiral shape, the scientists say.

The galaxy is also massive, at least 72 billion times the mass of the sun. Behemoth galaxies have been spotted in the early universe before (SN: 8/7/19). Growing a massive galaxy of any shape so quickly “is challenging enough,” says astronomer and study coauthor J. Xavier Prochaska of the University of California, Santa Cruz. “But the shocker is to see one in a nice spiral disk.”

The team unofficially named the galaxy the Wolfe Disk after astrophysicist Arthur Wolfe of the University of California, San Diego, who died in 2014. Wolfe was one of the first to suggest that disk galaxies existed in the universe’s infancy, to widespread skepticism, says Prochaska, who was one of Wolfe’s Ph.D. students.

“He was right, at least partially,” Prochaska says. “He deserves credit for having planted that flag against all conventional wisdom.”