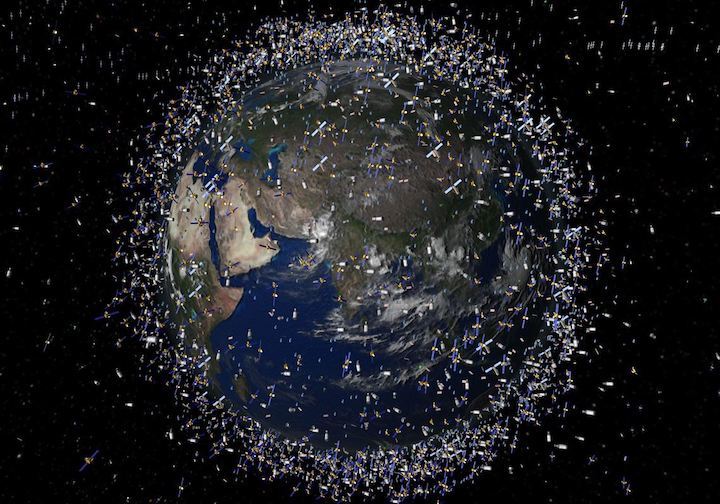 There are an estimated 2,200 satellites orbiting the Earth at present, but telecommunications companies are launching dozens of new satellites regularly in hopes of providing high-speed broadband internet access to the entire planet.

Just how many satellites are we talking about? London-based OneWeb planned to launch nearly 400 this year and ultimately have 650 in place. Elon Musk’s SpaceX has put 240 into orbit since last spring and could have 1,000 more launched by the end of the year. The company hopes to deploy as many as 42,000 satellites for its Starlink internet system.

Not to be left out of the game, Amazon plans to create its own space-based internet system, Project Kuiper, with the launch of more than 3,000 satellites.

That’s a lot of satellites that could fill the skies over the next decade. Now would be the time for the formation of an international organization — composed of satellite companies, scientists and government representatives — that would provide some control over how many satellites orbit the Earth.

While providing global internet access would open the doors to nearly 3 billion people who are currently offline, the launch of these “megaconstellations” of satellites has scientists and space officials worried about the impact of so many orbiting devices.

Some scientists fear that the sheer number of satellites could blot out the stars to the point where observations of the universe through Earth telescopes would be nearly impossible. They could also affect astronomy research by disrupting radio frequencies used for deep-space observation.

And there’s also the concern about the amount of space junk that could be floating around. There are already millions of pieces of junk — from abandoned satellites or pieces of spacecraft — in space. Crowding the skies with tens of thousands of new satellites increases the risk of more pieces falling off, as well as the possibility the debris would strike other satellites. In the late ’70s, NASA scientist Donald Kessler put forth a theory — the Kessler effect — that the floating debris could create a catastrophic chain of collisions that would produce a field of space junk and hinder space travel.

Most astronomers doubt there is a real danger from the Kessler effect, but controlling the path of satellites and avoiding collisions will take considerably more vigilance. Earlier this year, the possibility of two satellites colliding over Pittsburgh drew wide attention. A NASA official said that if thousands more satellites are placed in orbit, collision avoidance maneuvers would increase from “three a day to eight an hour.”

The good news is that before companies launch satellites, they have to present plans to their respective country’s regulators — the Federal Communications Commission in the U.S. They have to provide an analysis of collision risks and proposals for taking satellites safely out of orbit. Most would burn up in the Earth’s atmosphere once taken out of orbit.

Still, the possibility that 50,000 more satellites could be in orbit within a decade demands some international attention and cooperation. Taking steps now to limit the impact could keep the skies a bit clearer for future exploration.

Raumfahrt - A crowd in space: Tens of thousands of satellites planned for orbit Taking steps now to limit the impact could keep the skies a bit clearer for future exploration
« Zum vorherigen Eintrag Zum nächsten Eintrag »
842 Views
Created with page4