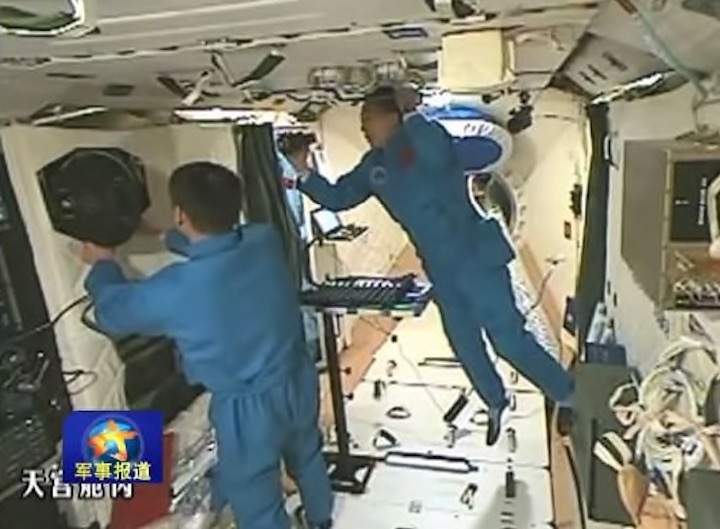 After the successful maiden flight of the Long March-5B large rocket and the testing of China's new-generation manned spaceship, more details of China's space station have been unveiled.

The space station, expected to be completed around 2022, will operate in the low-Earth orbit at an altitude from 340 km to 450 km for more than 10 years, supporting large-scale scientific, technological and application experiments, according to a report in the People's Daily.

The space station Tiangong, meaning Heavenly Palace, will be able to accommodate three astronauts in normal circumstances and up to six during a crew replacement.

The station will be a T shape with the core module at the center and a lab capsule on each side. Each of the modules will be over 20 tonnes, with the total mass of the station about 66 tonnes, said Zhou Jianping, chief designer of China's manned space program.

If China's Tiangong-1 and Tiangong-2 space labs are like one-bedroom apartments, the space station is equivalent to an apartment with three bedrooms, a living room, a dining room and a storage room, said Zhu Guangchen, deputy chief designer of the space station from China Academy of Space Technology (CAST).

The core module of the station, named Tianhe, has a total length of 16.6 meters, a maximum diameter of 4.2 meters and a takeoff mass of 22.5 tonnes, and is currently the largest spacecraft developed by China.

The Tianhe core module will be the management and control center and the main living space of the crew, and will support some scientific and technological experiments.

The core module has two berth ports connecting to the two lab capsules, and three docking ports for the crew spacecraft, cargo and other craft. It also has an exit for astronauts to conduct extravehicular activities.

The first lab capsule, named Wentian, will be mainly used for scientific and technological experiments, as well as working and living space and shelter in emergency.

This capsule is equipped with a special airlock chamber to support extravehicular activities and a small mechanical arm for automatic installation and operation of extravehicular instruments.

It possesses some key functions of the core module, which means it can perform the management and control of the space station if needed, according to CAST.

The second lab capsule, named Mengtian, has functions similar to the first lab capsule. It is equipped with a special airlock chamber to support the entry and exit of cargo and instruments with the help of astronauts and mechanical arms.

The Long March-2F carrier rocket and Shenzhou manned spacecraft will be used to transport crew and some materials between Earth and the space station. The Shenzhou can carry three astronauts and be used as a rescue spacecraft in emergency.

The Long March-7 rocket and Tianzhou cargo spacecraft will be used to transport materials, propellants and instruments for the station.

The Long March-5B rocket will carry into space the core module and lab capsules, as well as a capsule holding a 2-meter-caliber optical telescope, which will fly in the same orbit as the space station.

The telescope capsule, named Xuntian, is expected to provide observation data for astronomical and physical studies to help scientists better understand the universe. During its expected 10-year operation, it will be able to observe over 40 percent of the sky, said Zhou.

The capsule can dock with the space station for maintenance and refueling. Enditem