Drawing With Drones Over the Salt Flats of Bolivia

Reuben Wu uses LED-equipped drones to illuminate mysterious shapes in one of the world’s strangest landscapes. 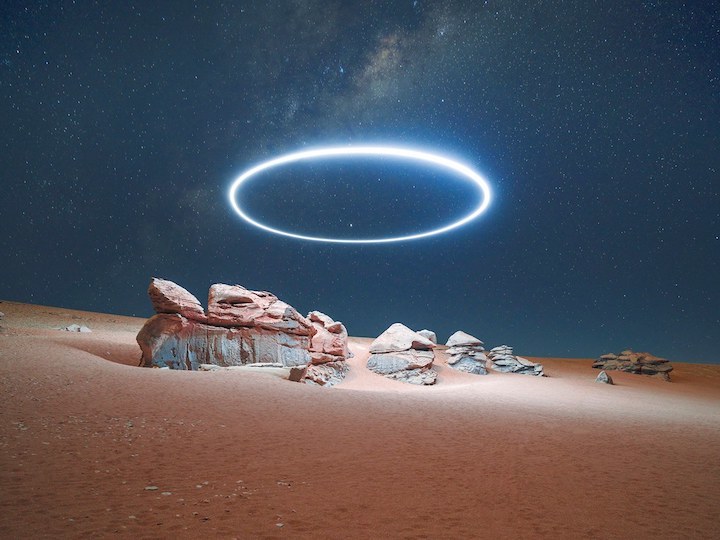 In July, Reuben Wu and two companions took a week-long road trip through Bolivia, capturing some of the country's most stunning landscapes. 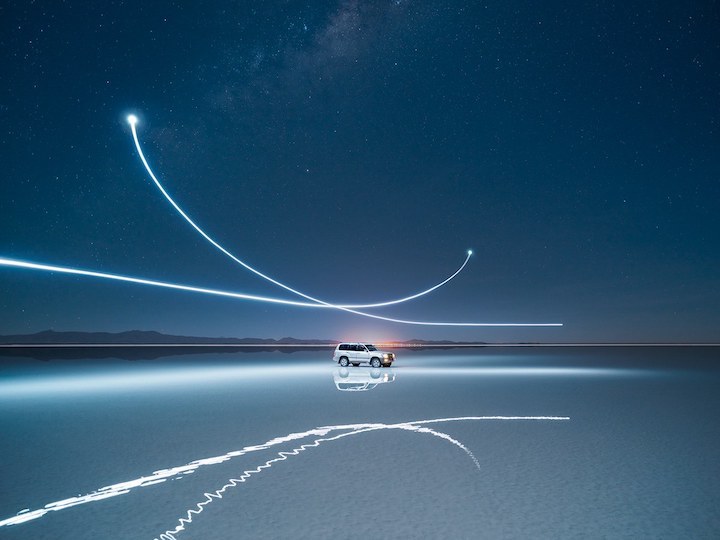 The trip's main goal was to photograph Bolivia's Salar de Uyuni, the world’s largest salt flat, a nearly featureless white landscape left behind by the evaporation of prehistoric lakes. 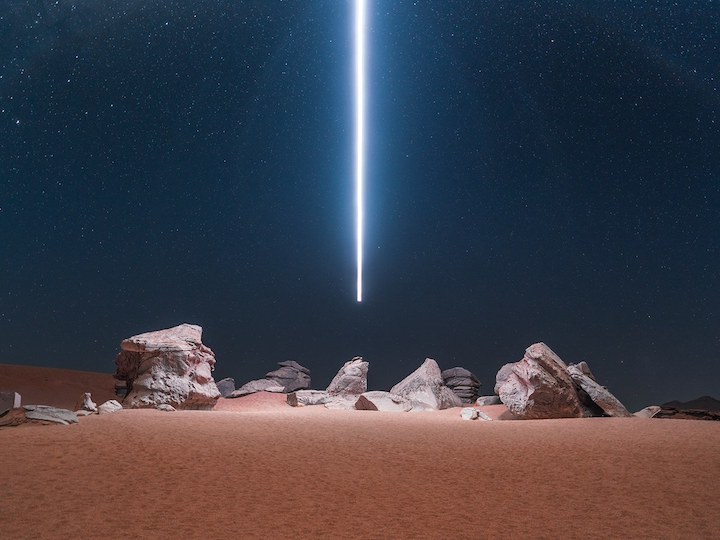 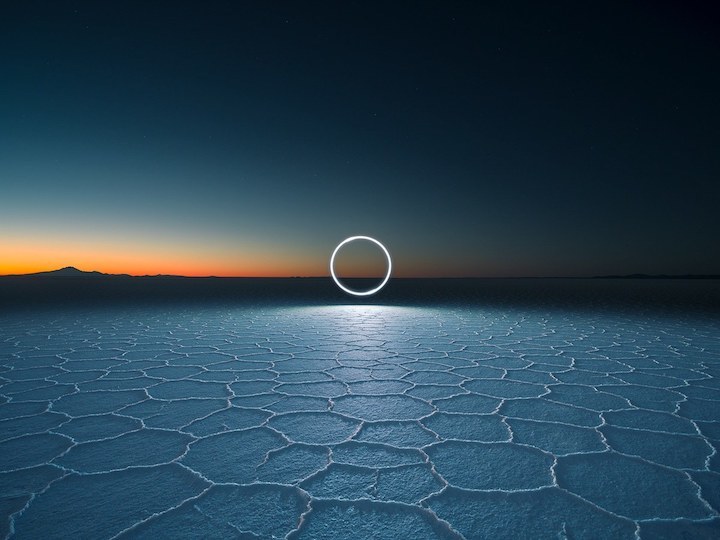 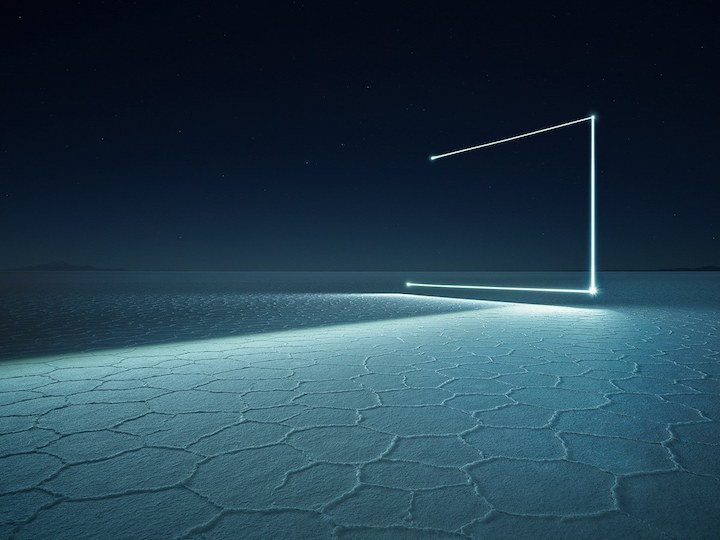 The photographer draws inspiration for the aeroglyphs from the work of land-art pioneers like Robert Smithson and Michael Heizer. 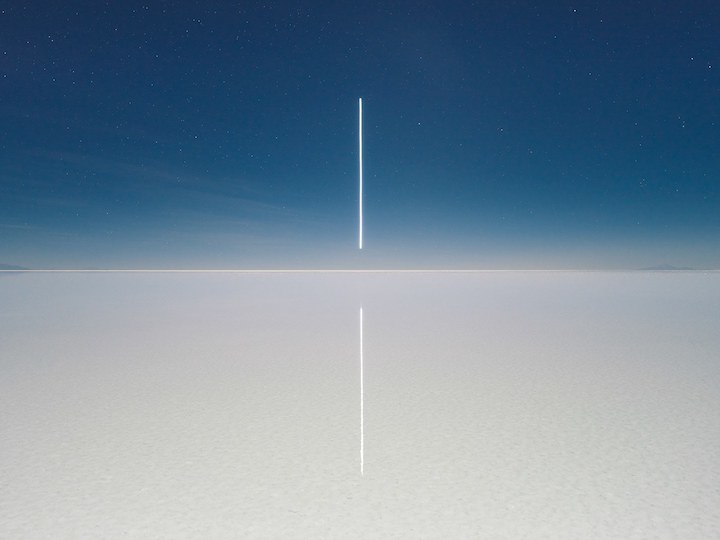 During the rainy season, the flats are submerged in 6 to 20 inches of perfectly still water, turning the shallow lake into the world's largest mirror. Wu was able to capture the effect by shooting a large standing puddle.

Reuben Wu has photographed some of the world’s most remote and extreme places: Chile’s Atacama Desert, the Bisti Badlands of New Mexico, the Arctic tundra of Norway, Peru’s Pastoruri glacier. But few locations compare to the site of his latest project, Bolivia’s Salar de Uyuni. Stretching across more than 4,000 square miles of South America’s Altiplano (high plain), Salar de Uyuni (literally, the salts of Uyuni, the nearest town) is the world’s largest salt flat, a nearly featureless white landscape left behind by the evaporation of prehistoric lakes.

During the rainy season, the flats are submerged in 6 to 20 inches of perfectly still water, turning the shallow lake into the world’s largest mirror. In the dry season, when Wuvisited, the salt crystals dry into an intricate latticework of tile-like polygons stretching away to the horizon in every direction. “I was really taken by this composition of pure horizon,” Wu says. “It’s just the sky and the landscape.”

Shooting the salt flats was the culmination of a week-long Bolivian road trip Wu and two companions took last July. Between the freezing nighttime temperatures, high altitudes (the Altiplano averages 12,000 feet above sea level), and long drives, the team got little sleep. “We were cold, we were light-headed, and doing anything physical was very hard,” Wu recalls. “There were times when I really struggled.”

But the hardships paid off when the crew finally reached the salt flats. Because it was the dry season, most of the Salar de Uyuni looked like a geometrically patterned moonscape. Still, Wu was lucky enough to find a standing puddle large enough to capture the rainy-season mirror effect, too. In addition to more traditional landscape photography, Wu created several of his signature aeroglyphs—glowing geometric shapes that float mysteriously in the sky. Wu draws the aeroglyphs by piloting LED-equipped drones in precise patterns while keeping his shutter open to create a long exposure.

Over the course of the road trip Wu documented a variety of Bolivian landscapes ranging from sandy deserts to rocky palisades, but the Salar de Uyuni emerged as the highlight. “If it were in the US, it would be swarming with tourists,” he says. “Instead, we had the whole thing to ourselves except for the occasional farmer and a cow.” The salt flats are rich in deposits of lithium, a key element in smartphone and electric car batteries, but lithium mining operations are still in their infancy thanks to the region’s inaccessibility and the reluctance of recently ousted president Evo Morales to greenlight foreign investment.

Throughout the trip, Wu used a Phase One XT, a compact medium-format digital camera that allowed him to take ultrahigh-resolution images on the go. Back in his studio, he used software to tinker with the images until arriving at the final product. Wu thinks of photography as “painting with light” and doesn’t fetishize authenticity. “For me, everything’s a tool,” he says. “The camera’s a tool, the computer’s a tool. Just so long as the technology and the tools don’t overwhelm the vision.”