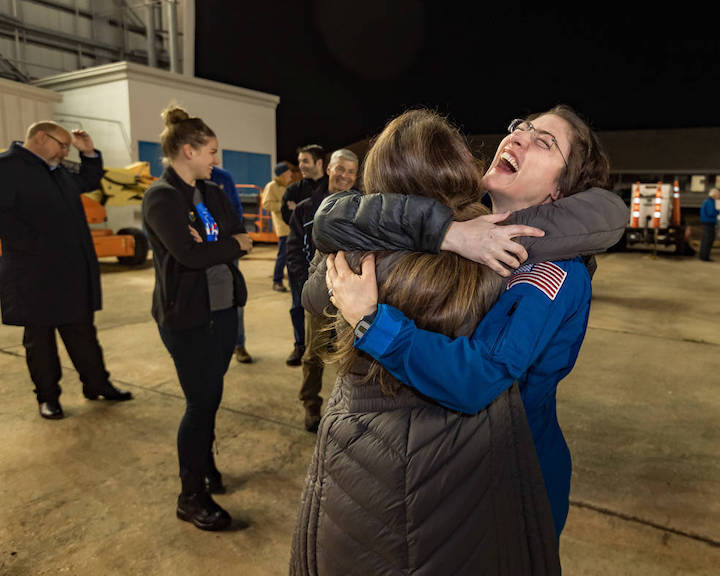 NASA astronaut Christina Koch returned to Earth on Thursday, Feb. 6, 2020 after logging 328 days in space --- the longest spaceflight in history by a woman --- as a member of Expeditions 59-60-61 on the International Space Station.

This will be Koch’s first news conference after returning to Earth from a 328-day mission aboard the International Space Station, the longest spaceflight ever for a woman.

To attend the briefing in person, U.S. media must request credentials from the Johnson newsroom at 281-483-5111 no later than noon Wednesday, Feb. 12. To ask questions by phone, media must call the Johnson newsroom no later than 3:10 p.m. on Wednesday, Feb. 12. Those following the briefing on social media may ask questions using #AskNASA.

Koch launched in March 2019 with NASA astronaut Nick Hague and Russian cosmonaut Alexey Ovchinin. She landedFeb. 6 with ESA (European Space Agency) astronaut Luca Parmitano and cosmonaut Alexader Skvortskov. On her first flight into space, Koch participated in experiments that will provide researchers the opportunity to observe effects of long-duration spaceflight on a woman. This will directly benefit the agency’s plans to land the first woman and next man on the Moon under the Artemis program and prepare for human exploration of Mars.

Koch’s mission spanned 5,248 orbits of the Earth – a journey of 139 million miles -- roughly the equivalent of 291 round trips to the Moon. She conducted six spacewalks during her 11 months on orbit, including the first three all-woman spacewalks, spending 42 hours and 15 minutes outside the station. She also supported the arrivals and departures of more than a dozen Soyuz and cargo resupply spacecraft from the U.S., Japan, and Russia. Her mission was the second longest single spaceflight by a U.S. astronaut after retired astronaut Scott Kelly, placing her seventh on the list of American space travelers with the most time in space.