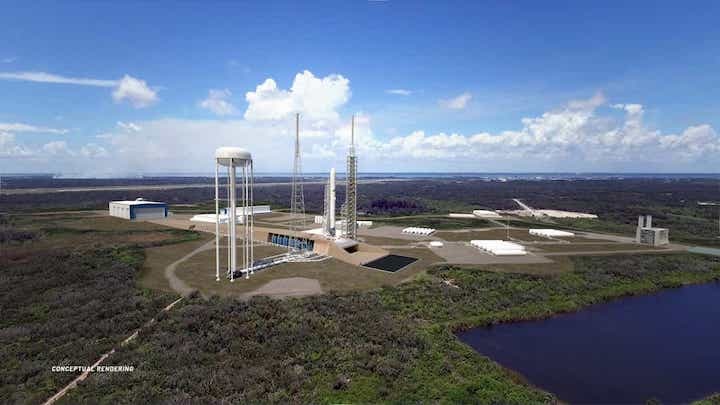 Half a dozen heavy-duty cranes pierce the horizon above Cape Canaveral's Launch Complex 36, clear visual cues of the work being done by Blue Origin teams to prepare the pad for upcoming rockets.

Just below their tallest points, the skeletal forerunner of a massive hangar and processing facility is also taking shape here, designed to process New Glenn rockets before they roll out to the pad. Some 300 feet in height, New Glenn will rise over most structures at the complex, save for the launch tower and lightning towers.

But eyes gazing toward the tip of the Cape can't miss one more soaring figure at Launch Complex 36: a 351-foot-tall water tower.

Designed to store hundreds of thousands of gallons of water for liftoff soundsuppression and temperature control, the new tower's gray exterior has yet to be painted, showing where teams joined its massive segments. Even from miles away, it's visible to the naked eye.

Blue Origin, which confirmed the height to FLORIDA TODAY, might have a record-breaker on its hands, though there's no official list of world's tallest water structures. It's taller than other water towers on the range, like those at pad 39A and 39B, both of which top off at 290 feet. And it reaches higher than the 307-foot water tower at NASA's Wallops Flight Facility in Virginia, previously thought to be the world's tallest.

Either way, Blue Origin's water tower is easily among the tallest ever built.

"That's a pretty big beast of a structure," said Paul Cosentino, a professor of mechanical and civil engineering at Florida Tech, noting that the height helps drive additional water pressure.

In some ways, building the facilities at Launch Complex 36 is just as challenging as launching rockets – especially when fighting the ever-encroaching Atlantic Ocean, unstable soil, and the possibility of powerful hurricanes.

"You can't just put a crane out there without designing the soil below the crane to hold it in place," Cosentino said. "There's little stuff in these construction sites that people don't typically see that are critical."

"The engineering behind those is as complicated as any engineering that I've encountered," he said.

The work isn't just limited to the surface. Pilings, or heavy posts, are driven deep into the ground to support the foundations of a structure. In Florida where the soil is soft and water is always a factor, this is a challenge exacerbated by the sheer magnitude of building a launch pad just a thousand feet from the ocean.

And it's not like the water tower won't present challenges when in use. Cosentino said as it rapidly drains for a launch, even the direction of the water's rotation inside the tower will introduce forces that will stress its overall structure.

"As it drains, it's got that Coriolis effect where the water's going to spin," he said. "That spinning coming down as it's emptying is a big deal structurally. When you're talking something that massive, those stresses are pretty serious."

Overall, he said massive projects like these involve an impressive amount of coordination between civil engineers, mechanical engineers, aerospace engineers, and countless others.

All those factors add up to big costs: Blue said it plans on investing more than $1 billion on the Space Coast in the coming years. That includes a massive expansion of its New Glenn rocket factory on north Merritt Island, Launch Complex 36 upgrades, and other support facilities.

New Glenn is Blue's heavy-lift vehicle designed to take large satellites, groups of small satellites, and other spacecraft to orbit. It fits into founder Jeff Bezos' long-term vision of developing ways for people to live and work in space – all of which would begin at Launch Complex 36.

If all goes according to plan, New Glenn will launch no earlier than late 2021.

Raumfahrt - At Cape Canaveral, Blue Origin's water tower is one of the tallest in the world
282 Views
Created with page4