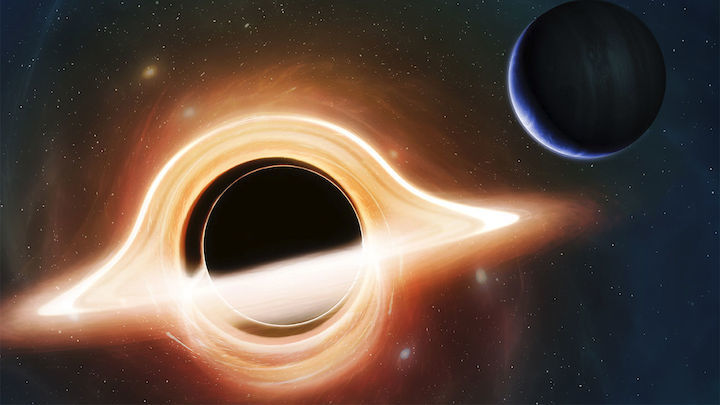 Supermassive black holes have a reputation for consuming everything in their path, from gas clouds to entire solar systems. So is there any way aliens could live on a world that actually orbited one of these cosmic beasts? Surprisingly, the answer is a tentative yes, researchers say, although there are plenty of reasons why life could never take hold in such a place. If it did, living on such a planet would be truly surreal, with the black hole filling nearly half the sky and concentrating leftover photons from the big bang into a pseudosun.

The study was inspired by the 2014 film Interstellar, in which astronauts travel through a wormhole to a giant black hole and visit several planets in orbit around it. Astrophysicist Pavel Bakala of the Silesian University in Opava and his colleagues approached the problem by considering the thermodynamics of such worlds. For life to evolve, a planet needs a source of usable energy (the Sun in the case of Earth) and a sink for unusable waste heat (for us, the cold of space). It’s the difference between the two that drives the processes that create life.

In Interstellar, the situation is reversed: The “sun” is cold and space is hot. The black hole itself is an ideal heat sink, the researchers argue, and usable energy can come from the cosmic microwave background (CMB), weak radiation from the big bang that permeates space. At just a few degrees above absolute zero, the CMB is weak, but the extreme gravity of a supermassive black hole would scrunch the radiation into optical wavelengths and funnel it into a narrow beam. On one of these bizarre planets, the researchers say, the CMB would appear as a bright star just on the edge of the black hole’s shadow.

The scientists first published this idea in 2017. Now, they have firmed up the numbers. In order to receive strong enough CMB light, a planet would need to orbit very close to the black hole’s event horizon. Normally an object that close would soon get sucked in. If the black hole is spinning fast, however, close stable orbits are possible. But, as the researchers report in The Astrophysical Journal, for their planet to get close enough, the surface of the black hole would have to spin at less than a 100-millionth of a percent shy of the speed of light.

The black hole would also need to be large, the team calculates, at least 163 million times the Sun’s mass. That’s because smaller supermassive black holes like the one in our Milky Way, weighing in at 4 million solar masses, tend to rip stars or planets apart with tidal forces as they approach. Around larger black holes, tidal disruption doesn’t happen until a star or planet is inside the event horizon, so anything outside is safe from that fate.

For an orbiting planet to thrive, the galactic center would also need to be tranquil: “an old galaxy,” Bakala says, with “almost empty space” surrounding the black hole. That’s because any other stray matter being sucked into the black hole would emit a blast of radiation during its death spiral powerful enough to kill any life on a nearby planet. In any event, Bakala admits, “I don’t know what sort of life could form in this sort of environment.”

It would certainly be no place like home. The deep blackness of the event horizon, looming over nearly half the sky, would be a forbidding presence. And because of the time dilation effects in Albert Einstein’s theory of gravity, known as general relativity, 1 year passing on such a planet would see thousands of years go by around an ordinary star.

Even if life could take hold on such a world, there’s little chance of detecting it. A planet passing in front of a black hole isn’t going to make it appear any dimmer when it’s black already. Bakala says a vast array of radio telescopes, like the one used last year to image a black hole for the first time, might be able to detect such a transit. “Technically it’s not so easy, but in theory it’s possible.”

Theorist Avi Loeb of Harvard University often ponders such questions. Last year, he mused on “some fun things you can imagine doing near a black hole,” like using its accretion disk to burn trash and produce usable energy, or surfing with light sails on the jets coming from a black hole’s poles. Although he says such exercises are useful for teaching about gravity and the understanding the extreme conditions around a black hole, he could think of many reasons why a planet there could not be habitable.

For starters, he says, the high spin required of the black hole is close to the maximum physically possible, and there is no known mechanism for spinning up a black hole that fast.

Another problem is getting a planet there. Last year, researchers in Japan posited that planets could form in the cold disk of gas and dust that exists at some distance around a galactic center. But it’s difficult to imagine a way to move the planets to orbits skimming barely above the black hole’s surface, Loeb says.

Perhaps most significantly, most stars in the inner parts of galaxies would likely be stripped of their atmospheres by the powerful blasts of extreme ultraviolet light produced by the central black hole as it grows by gobbling gas and dust, Loeb and a colleague calculated a few years ago. A planet close to its surface wouldn’t stand a chance.

Although Bakala concedes that the study was simply an intellectual exercise, in part to get students thinking about thermodynamics, it has got him and his team wondering about the detectability of small bodies close to galactic centers. Astronomers can see large bright suns, known as S-type stars, swooping in close, but Bakala thinks that older and dimmer objects such as neutron stars could, through a quirk of gravitation, make their presence known.

Loeb says his musings arose from a recent undergraduate course he taught. He asked his students whether, if the offer arose, they would take a ride in a spaceship with aliens or, alternatively, travel to a black hole. Most said they would want to meet aliens, so long as they had internet access and could share their experiences with friends. But black hole tourism was a no-go: Once inside a black hole, not even an Instagram can escape.

Astronomie - Could a habitable planet orbit a black hole?
1045 Views
Created with page4