Sci-fi classic "2001: A Space Odyssey," lands at the Museum of the Moving Image (MOMI) in Queens, New York.

"Envisioning 2001: Stanley Kubrick's Space Odyssey," a new, temporary exhibition, showcases imagery from and the history of the beloved movie directed by Stanley Kubrick, who collaborated on the screenplay with the novel's author, Arthur C. Clarke.

Since the film premiered in 1968 —  –even before the first crewed moon landing – the film has remained an iconic pillar of sci-fi, inspiring countless other works of fiction. From its stark, boundary-pushing visuals with pioneering special effects, to the way it tackles humankind's evolving relationship with technology, "2001" continues to influence the world at large. 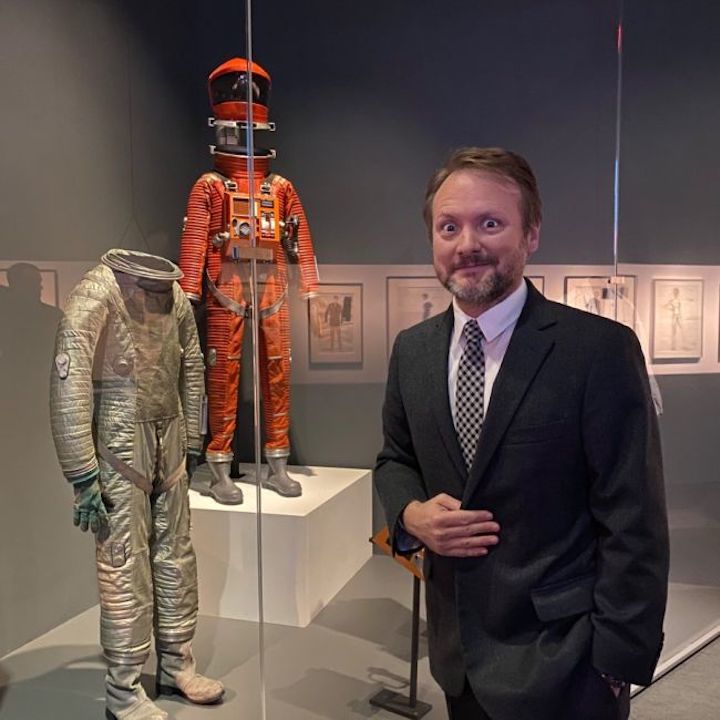 Director Rian Johnson checked out the "2001: A Space Odyssey" exhibit at the MOMI after speaking before a film screening in January, 2020.   (Image credit: @MovingImageNYC/Twitter)

This new exhibit, which opened at the museum on Jan. 18 and will be on display until July 19, 2020, explores the research, production work and inspiration that went into Kubrick's masterful film. The show includes original artifacts from the making of the film from international collections, the museum's own collection and from the Stanley Kubrick Archive at the University of the Arts in London.

Included among the pieces on display are concept sketches for Clavius Base, the fictional lunar settlement in the film, created by Douglas Trumbull, the special photographic effects supervisor on the movie. The exhibit also includes costumes, such as a spacesuit worn at Clavius Base, and a Moonwatch ape suit that was originally worn by actor Dan Richter during the "Dawn of Man" evolution scene. Additionally, you 'll find 2001 storyboards, contact sheets, test film and photographs.

Accompanying the exhibit is a series of movie events and public programs.

Feb. 8: The museum will screen the film "Contact" as part of a "Science on Screen" series. The screening will be introduced by a scientific researcher.

Feb. 16: Trumbull and Piers Bizony will introduce a 70mm screening of "2001." The museum is hosting monthly 70mm screenings of the film.

March 7: Astronomer and data scientist Jana Grcevich will introduce a screening of "Woman in the Moon."

2001 Screenings: The museum is hosting weekly matinee screenings of "2001" throughout the duration of the exhibition.

"See It Big! Outer Space": This series will screen some of the best space movies ever made.

Tickets to "Envisioning 2001: Stanley Kubrick's Space Odyssey," cost $20 and include general admission, though there are discounts available for seniors, students and museum members.