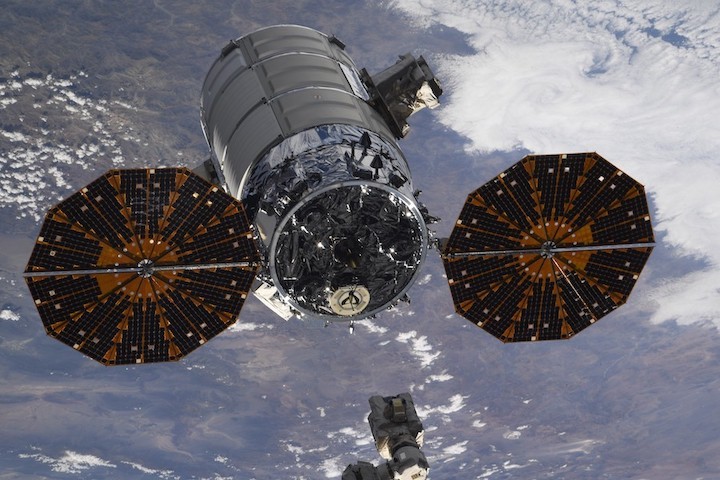 A Northrop Grumman Cygnus cargo craft departed the International Space Station Friday to close out a three-month stay, then raised its orbit to release multiple experimental nanosatellites for NASA, the U.S. military and research institutions, including one that was snap-assembled by astronauts using 3D-printed parts produced on the station.

The automated cargo freighter is scheduled to re-enter Earth’s atmosphere at the end of February, when it will burn up over the South Pacific Ocean to dispose of several tons of trash and unnecessary equipment from the space station, including a failed NASA sensor designed to study space debris and a disused European solar research instrument.

“The new orientation allowed for easier drift away from the station’s Canadarm2 robotic arm,” NASA said.

After reaching a safe distance from the space station, the Cygnus cargo craft — named the S.S. Alan Bean in honor of the late Apollo 12 moonwalker — fired thrusters to raise its orbit to an altitude of more than 285 miles (460 kilometers) to begin ejecting 14 CubeSats to begin their scientific research and technology demonstration missions.

Seven of the nanosatellites sprung out of an external mechanism provided by NanoRacks, a Houston-based company that arranges rides to space for small research payloads and CubeSats. Another seven CubeSats were programmed to deploy from containers mounted on the Cygnus spacecraft’s forward hatch by astronauts in the days before the cargo ship’s departure. 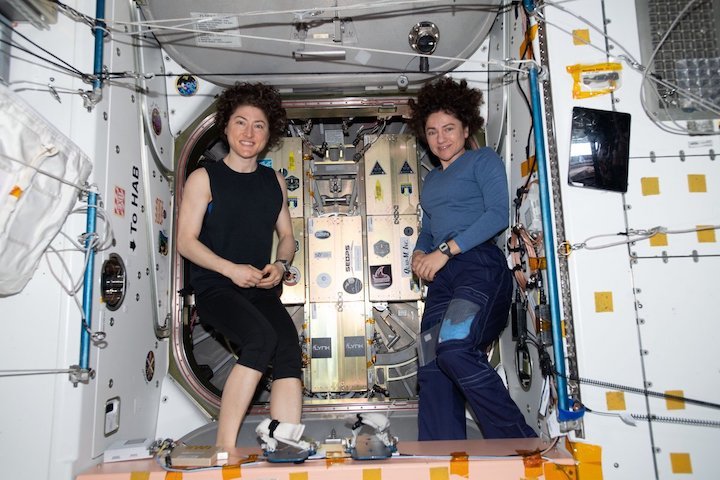 Friday’s departure marked the beginning of the end of the 12th Cygnus resupply mission to the space station. The automated cargo carrier arrived at the station Nov. 4, two days after launching atop a Northrop Grumman Antares rocket from Wallops Island, Virginia.

The equipment delivered inside the Cygnus cargo freighter’s Italian-made pressurized compartment in November included tools and replacement hardware for the repair of the Alpha Magnetic Spectrometer, which was completed last month by astronauts Luca Parmitano and Andrew Morgan, who performed a series of spacewalks to restore the $2 billion particle physics instrument to science operations.

Other payloads carried aboard the Cygnus included a zero-gravity oven that baked the first cookies on the space station, a radiation-shielding vest to protect astronauts, and mice to help scientists understand whether exposure to microgravity changes the animals’ circadian rhythm.

After unloading the Cygnus spacecraft’s pressurized compartment, astronauts on the station packed trash and other unnecessary equipment for disposal.

The Cygnus cargo craft flying on the NG-12 mission debuted a new capability to accommodate large instruments on the outside of the spacecraft’s pressure shell. The new capability allows the Cygnus to dispose of equipment mounted outside the space station.

On this mission, the Cygnus spacecraft departed the station with the European Space Agency’s SOLAR payload, which monitored the sun’s radiation output from 2008 until 2017. NASA’s Space Debris Sensor, which failed in 2018 soon after its launch to the station, is also fixed outside the Cygnus spacecraft to burn up with the cargo freighter when it re-enters the atmosphere later this month.

While Northrop Grumman controllers in Dulles, Virginia, oversee the final weeks of the NG-12 mission, ground teams on Virginia’s Eastern Shore are readying another Cygnus spacecraft for launch on an Antares rocket Feb. 9 at 5:39 p.m. EST (2239 GMT) to begin the company’s 13th resupply mission to the space station. 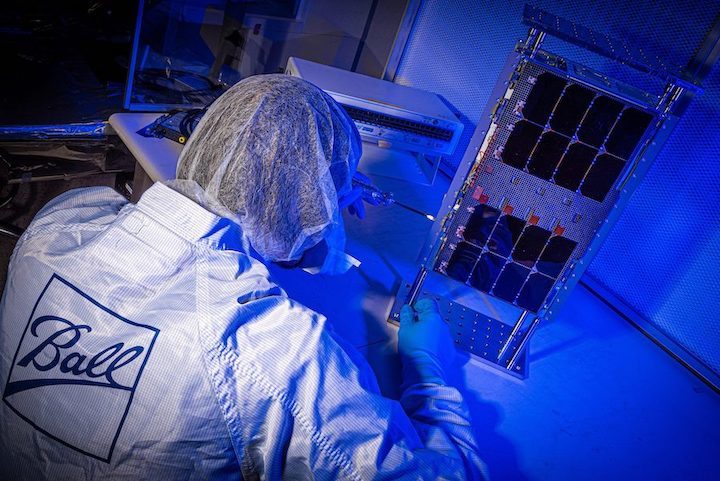 Seven nanosatellites ejected out of a NanoRacks deployer to begin their technology demonstration and scientific research missions.

Billed as the first amateur satellite from the state of Washington, the shoebox-sized HuskySat 1 CubeSat was one of the small spacecraft deployed from the NanoRacks mechanism. It will test two experimental payloads — a pulsed plasma thrusters and a high-frequency K-band communication system — according to the University of Washington, where students assembled the spacecraft.

The SwampSat 2 nanosatellite, developed at the University of Florida, was expected to unfurl a 172-square-foot (16-square meter) loop antenna after release from the NanoRacks deployer. The antenna will measure very low frequency wave propagation in the upper ionosphere.

Four CubeSats developed by the Aerospace Corp. were also deployed from the NanoRacks mechanism. Two of the nanosatellites, known as AeroCube 14A and 14B, were sponsored by the National Reconnaissance Office and will test new small satellites technologies and materials, such as structural materials, thermal straps and advanced solar cells.

The AeroCube 15A and 15B CubeSats, also known as Rogue Alpha and Beta, were developed by the Aerospace Corp. on a tight 18-month timeline for the U.S. Air Force. The CubeSats are designed to serve as a pathfinder for rapid spacecraft development processes, and each of the identical nanosatellites hosts an optical imager to observe clouds and ground targets.

NanoRacks confirmed the successful release of all seven CubeSats out of its deployment mechanism.

Seven CubeSats were also housed inside a Slingshot deployment mechanism on the Cygnus spacecraft’s forward hatch. Supplied by Hypergiant SEOPS, the Slingshot was expected to release seven small CubeSats, according to Kristina Libby, an executive vice president at Hypergiant.

One of the CubeSats deployed from the Slingshot mechanism was CIRiS, which stands for the Compact Radiometer in Space. CIRiS will test the performance of a miniature Earth-observing instrument built by Ball Aerospace. The instrument on the CIRiS spacecraft — about the size of a briefcase — has applications in soil moisture observations in support of drought monitoring.

The EdgeCube nanosatellite — a 4-inch-wide (10-centimeter) 1-unit CubeSat —  also separated from the Cygnus spacecraft’s Slingshot deployer. It was developed by students at Sonoma State University, Santa Clara University and Morehead State University, and is designed to see ecosystem change over time.

Other CubeSats deployed from the from the Slingshot mechanism were MiniCarb for NASA and the Lawrence Livermore National Laboratory, and the Very Low Frequency Propagation Mapper for the Air Force Research Laboratory.

MiniCarb will measure greenhouse gases on Earth, and the VLF Propagation Mapper — or VPM — will measure the travel of radio waves in low Earth orbit.

An engineer on the MiniCarb mission confirmed it separated successfully from the Slingshot mechanism, and ground teams successfully established contact with the spacecraft.

A tiny satellite named MakerSat 1 developed by students at Northwest Nazarene University in Idaho was also packed in the Slingshot deployer. MakeSat 1 was designed to be quickly snap-assembled by astronauts on the space station, then loaded into its deployment slot. 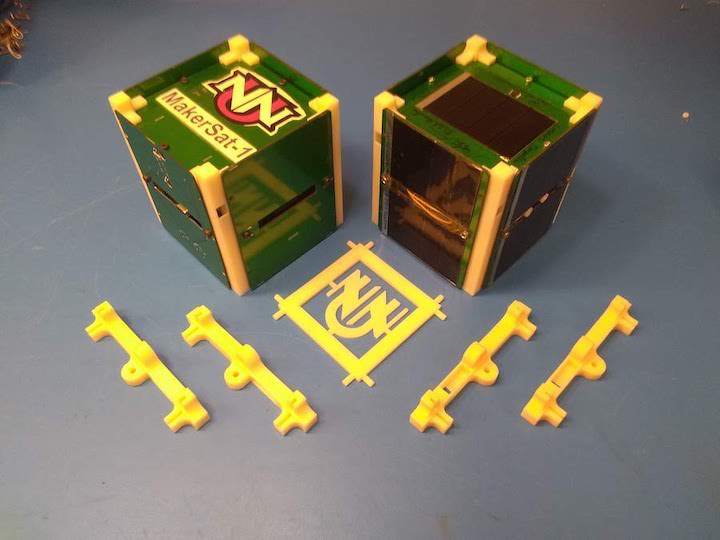 The data received by ground teams so far has provided insights on the robustness of the 3D-printed components, which were produced aboard the space station’s Additive Manufacturing Facility owned by Made in Space.

“MakerSat 1’s 1U frame structure was was specifically designed to be 3D-printed on the AMF and then quickly snapped-together aboard the ISS,” Parke wrote in an email to Spaceflight Now.

A CubeSat for DARPA, the U.S. military’s research and development arm, was also deployed from the Slingshot device. The Slingshot also carried a payload for Lynk — formerly known as Ubiquitilink — a Virginia-based with ambitions to launch a constellation of tiny satellites to extend the reach of terrestrial cell phone networks.