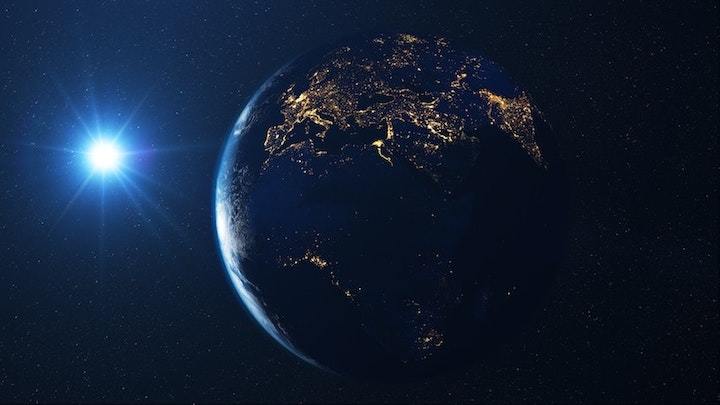 Could the Earth be a life-exporting planet? That’s the curious question examined in a recent paper written by Harvard University astronomers Amir Siraj and Abraham Loeb.

The researchers take a novel twist on the controversial notion of panspermia – the idea, propelled into the mainstream in the early 1970s by astronomers Fred Hoyle and Chandra Wickramasinghe, that life might have started on Earth through microbes arriving from space.

The theory is generally discounted, although eminent astrophysicists such as Stephen Hawking conceded it was at least possible, and a major paper published in 2018 revived the topic big-time.

In their paper, Siraj and Loeb reverse the standard assumption about the direction of the microbial journey and ask whether it is possible to that at some point Earth-evolved bacteria could have been propelled away from the planet, possibly to be deposited somewhere else in the Milky Way.

To examine the idea, they fed several bits of evidence, and a few reasonable assumptions, into a computer and let the numbers run.

First and foremost, they rely on evidence from several studies that confirm the existence of airborne microbial colonies as high as 77 kilometres above the surface of the planet. The authors note that “the abundance of microbes in the upper atmosphere is poorly constrained”, so the density of life in the upper reaches remains largely guesswork.

Also unknown at this point is whether bacteria colonies persist above 100 kilometres up.

In the absence of any extraterrestrial versions of dirt-sampling spacecraft such as Japan’s Hayabusa asteroid-lander, the only viable transport methods for shipping microbes out of Earth’s atmosphere, the researchers say, are long-period comets and interstellar objects.

The comets, they note, “can easily be ejected from the Solar System by gravitational interactions with planets due to their low gravitational binding energies and planet-crossing orbits”. Interstellar objects are new to the scenario, their existence well demonstrated by the recent discoveries of ‘Oumuamua and 2I/Borisov – both high-speed big lumps of rock that entered the solar system from elsewhere.

At particular speeds and particular angles, they calculate, both comets and asteroids could come close enough to Earth to “graze” its upper atmosphere before being flung out of the Solar System with the aid of a gravitational slingshot generated by the close encounter.

During such an interaction, the objects would inevitably plough through the airborne bacterial colonies – the researchers cite Bacillus subtilis, Deinococcus radiodurans, Escheria coli, and Paracoccus denitrificans as the most likely candidates.

Sufficient numbers of the newly gathered passengers, the modelling shows, would survive the g-forces of the slingshot acceleration and the friction-induced heating caused by leaving the atmosphere.

Siraj and Loeb calculate that across the life of Earth, between one and 10 comets and between one and 50 interstellar objects have come close enough to graze the atmosphere.

Previous research has shown that bacteria could easily survive on board an asteroid or comet in interstellar space – lapsing into suspended animation if necessary – and could just as easily survive the enormous pressure caused by their transport smacking into a planet.

Thus, the researchers conclude that although much more research is needed – particularly into the make-up and distribution of microbes in the upper atmosphere – the idea of panspermia beginning on this planet and heading outwards is “realistic”.

The truth of the matter might never be known, of course, at least for several centuries; but it is at least possible that somewhere many light years hence there is a corner of a distant solar system that is forever Earth.

The paper can be found on the pre-print site arXiv.