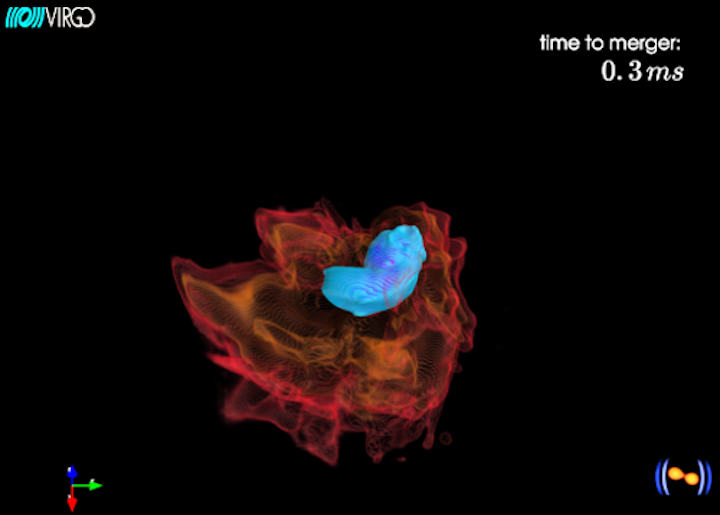 In the nearly five years since their first direct detection, gravitational waves have become one of the hottest topics in astronomy. With facilities such as the Laser Interferometer Gravitational-Wave Observatory (LIGO), researchers have mostly used these ripples in spacetime to study the inner workings of merging black holes, but LIGO has also detected gravitational waves from other sorts of celestial crashes, such as the collisions of ultradense stellar remnants called neutron stars. Sometimes, however, LIGO serves up gravitational waves that leave astronomers scratching their heads—as was the case for GW190425, an event detected last April that was recently attributed to a neutron star merger.

The trouble is that LIGO’s data suggest this neutron star pair was substantially overweight—collectively, some 3.4 times the mass of the sun, which is half a solar mass heavier than the most massive neutron star binaries ever seen. “It is the heaviest known by a pretty wide margin,” says Chad Hanna, an astrophysicist at Pennsylvania State University who hunts gravitational waves.

That extra weight has some theorists suspecting that GW190425 did not arise from colliding neutron stars at all but rather something much more exotic: A merger of two primordial black holes (PBHs), never before seen objects that are considered a dark horse candidate for dark matter—the invisible, unidentified something that makes up most of the matter in the universe. Theorized to have formed from density fluctuations in the very early universe, these ancient black holes could still exist today and could explain the mass discrepancy identified in the recent LIGO observations.

Almost a half-century ago, cosmologist Stephen Hawking proposed that PBHs could have sprung fully formed from regions of the infant universe that were especially dense with matter. Since then, the idea’s popularity among astrophysicists and cosmologists has wildly waxed and waned. Today, in the absence of direct evidence for their existence, PBHs are seen by many researchers as a hypothesis of last resort, only to be considered when no other scenario readily fits observations. The possibility that PBHs are real and widespread throughout the universe cannot yet be dismissed, however—especially as searches for other dark matter candidates come up empty.

PBHs make an appealing candidate for dark matter for several reasons, but the most important one is that, being black holes, they are quite dark yet still pack a hefty gravitational pull. Despite that fact, Hanna says that if PBHs were abundant enough to account for all of the universe’s dark matter, astronomical surveys that hunted for them should not have come up empty. Consequently, he adds, PBHs can only make up a small fraction of dark matter—if they exist at all.

Not everyone agrees. “Primordial black holes can comprise the whole of dark matter,” says Juan García-Bellido, a theoretical cosmologist at the Autonomous University of Madrid. The trick, he adds, is for the ancient objects to exhibit an array of masses rather than a single definitive size. If PBHs run the gamut from a thousand times less massive than the sun to a billion times larger, they could make up all of the universe’s dark matter. “All published constraints that claim to rule out primordial black holes as dark matter assume they exist in a monochromatic, or single-mass, spectrum and are uniformly distributed in space,” García-Bellido says. For such large mass ranges to manifest, the PBHs would have to cluster in compact groups in which they could occasionally collide, merge and grow larger.

Because PBHs would have been created shortly after the big bang, they initially could have easily connected with one another. The early universe was a much smaller place than it is today after dramatically expanding for nearly 14 billion years, making it easier for the objects to find other PBHs and pair up with them. As the universe continued to expand, and the first stars and galaxies emerged, however, those connections would have become increasingly rare. So while it is possible that LIGO has observed merging PBHs, it is unlikely, according to astronomer Katerina Chatziioannou, a LIGO team member at the Flatiron Institute in New York City and co-author of a study set to appear in the Astrophysical Journal Letters that pegs GW190425 as the product of colliding neutron stars.

Last April, alerted to LIGO’s detection of GW190425, telescopes around the world hunted for a corresponding electromagnetic signal that would typically be expected from the explosive collision of two neutron stars. But the skies remained dark, as they would if a pair of primordial black holes had slammed together. “We would not have expected any light to have come out of the merger of two primordial black holes,” Chatziioannou says. Even so, she adds, the lack of light does not rule out neutron stars. Massive neutron stars could have had a relatively placid merger, collapsing directly into a black hole before sparking any celestial fireworks. It is also possible that the event’s location in the sky could be from somewhere that Earth-bound telescopes could not probe, such as in a region behind the sun. “There are good reasons for them to have missed it if there was any light,” she says.

The newest observations provide only tantalizing hints that PBHs might be out there, occasionally coming together in the cosmic dark. A clearer signature would come from a pair of black holes in which each weighed less than the sun. “If you find a black hole below a solar mass, that, at the very least, comes from a mechanism that no one has predicted, astrophysically, outside of a primordial black hole,” Hanna says. García-Bellido concurs. “The smoking gun would be the discovery of a less than one-solar-mass black hole—or a black hole with a mass larger than 50 [times the sun],” he says.

Although LIGO’s observations could mark the first detection of PBHs, both Chatziioannou and Hanna agree that it is more likely that the gravitational waves merely came from overweight neutron stars. Theories for the formation of such bulky neutron stars already exist, and they require no speculative scenarios from the dawn of the universe. “It’s definitely a lot less likely that [the sources of these events] are primordial black holes than just neutron stars that are heavier than what we see in the galaxy,” Chatziioannou says. “It's not impossible; it’s just less likely.”

Astronomie - Did Astronomers Just Discover Black Holes from the Big Bang? Gravitational waves attributed to the collision of two neutron stars could have been produced by something much stranger
1026 Views
Created with page4