NASA astronauts are getting some new duds.

In anticipation of the upcoming Artemis program that will send space flyers back to the moon in 2024, the space agency held a media event at its Washington headquarters Tuesday to show off two new spacesuit designs. The spacesuits join a long line of ever-evolving suits that date back to the earliest days of the space program.

NASA said the xEMU is designed to outperform spacesuits worn during the Apollo era, as well as the ones now worn during spacewalks outside the International Space Station.

“You won’t see the bunny hopping and falls like those seen in the Apollo videos, because we’ve added bearings and new soft elements to help the suit move smoothly with the wearer,” Marshall Smith, director of NASA’s human lunar exploration program, said in a statement. “With the improvements to the suits for Artemis missions, astronauts can now open up new possibilities for science and exploration at the moon.”

NASA declined to give details on the new suits in advance of the event. But Pablo de Leon, a spacesuit expert at the University of North Dakota, told NBC News MACH in an email that one feature of the xEMU will be a new system for putting the suit on and taking it off.

“The last suits used on the moon … used a zipper to don and doff,” he said. “This is not the case anymore, since dust gets around the zipper’s teeth and will be prone to failure. Donning and doffing for the xEMU will be by a large opening in the back, with a sealed door.”

The xEMU will allow for greater mobility, especially in the shoulders, and will be able to keep astronauts comfortable from 250 degrees Fahrenheit to minus 250 degrees Fahrenheit, NASA spacesuit designer Amy Ross said during the event. In the event of an emergency, astronauts will be able to "shelter" inside the suit for up to six days, Dustin Gohmert, NASA's Orion crew survival systems project manager, added.

The new suit will also accommodate “a broad range of astronaut sizes,” the agency said in a separate statement. That could help NASA avoid a repeat of an embarrassing situation that occurred in March, when the agency had to cancel the first all-female spacewalkat the last minute because it didn’t have enough suits of the right size. 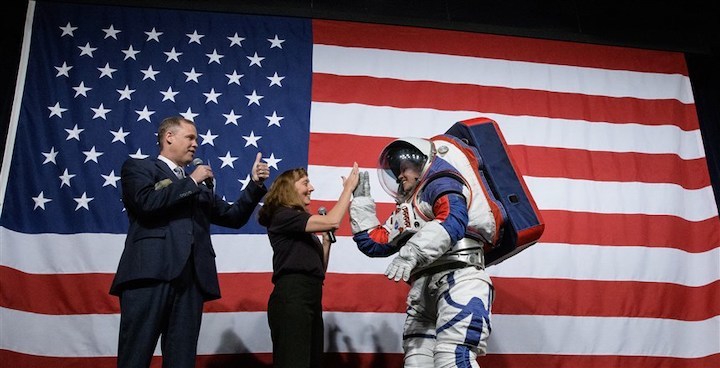 That first-of-its-kind spacewalk will now take place Oct. 21 as part of an ongoing "spacewalk bonanza" that continues through December. It will be conducted by astronauts Jessica Meir and Christina Koch, both of whom are currently aboard the station.

Spacesuits are currently in short supply. De Leon said, “The astronauts on board the station only have four sets, and that’s pretty much it."

Orion Suit Equipped to Expect the Unexpected on Artemis Missions

When astronauts are hours away from launching on Artemis missions to the Moon, they’ll put on a brightly colored orange spacesuit called the Orion Crew Survival System (OCSS) suit. It is designed for a custom fit and equipped with safety technology and mobility features to help protect astronauts on launch day, in emergency situations, high-risk parts of missions near the Moon, and during the high-speed return to Earth. 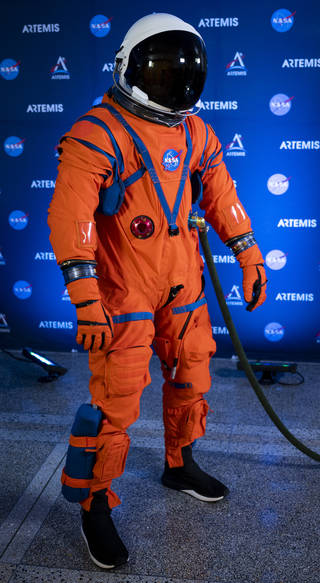 Many missions require two spacesuits – one worn outside a spacecraft during spacewalks that is designed as a self-contained personal spaceship, and another worn inside a spacecraft during high-risk parts of a mission, such as inside Orion during launch and reentry through Earth’s atmosphere. NASA is building both for Artemis missions. Drawing on six decades of spaceflight experience, NASA is developing its Exploration Extravehicular Mobility Unit, or xEMU, for moonwalks, and has reengineered elements of the crew survival suit worn on the space shuttle to enhance range of motion and improve safety for the astronauts who will wear it to get to the Moon and back to Earth.

The Orion suit, sometimes called a flight suit or a launch and entry suit, has been enhanced from head to toe with improvements to the suit worn on shuttle missions. Starting at the top, a number of features on the helmet allow for improved comfort and function. The helmet is lighter, stronger, comes in more than one size, helps reduce noise and is easier to connect to the communications system needed to talk to other crew members and mission control.

The outer cover layer, which is orange to make crew members easily recognizable in the ocean should they ever need to exit Orion without the assistance of recovery personnel, includes shoulder enhancements for better reach and is fire resistant. The suit is a pressure garment that includes a restraint layer to control the shape and ease astronauts’ movements. A reengineered zipper also allows astronauts to quickly put the suit on and has increased strength. New adaptable interfaces supply air and remove exhaled carbon-dioxide. The suit has and improved thermal management that will help keep astronauts cool and dry. A liquid cooling garment is worn underneath the suit, a bit like thermal underwear with embedded cooling tubes, was revamped to be more breathable and easier to build.

While shuttle-era spacesuits came in off-the-shelf sizes like small, medium and large, the Orion suits will be custom fit for each crew member and accommodate astronauts of all sizes. The patterns of the suit now minimize the spots of discomfort common during the shuttle era when worn pressurized for long periods of time. The suits’ gloves, the part of a spacesuit that receives the most wear and tear, are more durable and touch-screen compatible, and improvements to the boots provide protection in the case of fire, fit better, and help an astronaut move more nimbly.

Even though it’s primarily designed for launch and reentry, the Orion suit can keep astronauts alive if Orion were to lose cabin pressure during the journey out to the Moon, while adjusting orbits in Gateway, or on the way back home. Astronauts could survive inside the suit for up to six days as they make their way back to Earth. The suits are also equipped with a suite of survival gear in the event they have to exit Orion after splashdown before recovery personnel arrive. Each suit will carry its own life preserver that contains a personal locator beacon, a rescue knife, and a signaling kit with a mirror, strobe light, flashlight, whistle, and light sticks.

Through extensive design and engineering enhancements, the Orion suit will help provide an additional layer of protection for astronauts who embark on Artemis missions to the Moon and prepare for future missions to Mars.