NASA is moving up the first all-female spacewalk to this week because of a power system failure at the International Space Station.

Astronauts Christina Koch and Jessica Meir will now venture out Thursday or Friday, instead of next Monday, to deal with the problem. It will be the first spacewalk by only women in more than a half-century of spacewalking.

A critical battery charger failed over the weekend, prompting the change, NASA officials said Monday. The women will replace the broken component, rather than install new batteries, which was their original job.

Last week, astronauts conducted the first two of five spacewalks to replace old batteries that make up the station's solar power network. The remaining spacewalks — originally scheduled for this week and next — have been delayed for at least another few weeks so engineers can determine why the battery charger failed. It's the second such failure this year.

The devices regulate the amount of charge going to and from each battery. One didn't kick in Friday night, preventing one of the three newly installed lithium-ion batteries from working. The balky charger is 19 years old; the one that failed in the spring was almost as old. Only three spares remain available.

"It's absolutely a concern at this point when you don't know what's going on," said Kenny Todd, a space station manager. "We're still scratching our heads looking at the data. Hopefully, we can clear that up in relatively short order."

Despite the slight loss of power, the orbiting lab and its six occupants are safe, according to NASA, and science operations are unaffected. The current situation is "manageable, but again not something that we would want to live with in the long term," Todd told reporters.

NASA originally planned an all-female spacewalk last spring, but had to cancel it because of a shortage of readily available medium-size suits. Koch helped assemble an extra medium suit over the summer.

"Very good that we have 4 expert spacewalkers on board to shoulder this tough task. They are the A-team!" tweeted astronaut Anne McClain, who would have gone spacewalking with Koch in March if not for the suit-sizing issue.

While all four — two men and two women — are equally trained for the repair job, Koch and Meir are the right choices given the future spacewalking workload, officials noted.

Since the first spacewalk in 1965, there have been 227 spacewalkers, only 14 of them women. Meir will be making her first spacewalk and become No. 15. All but one of these women has been American.

The upcoming spacewalk will be "absolutely ... an exciting event," said Megan McArthur, deputy chief of NASA's astronaut corps. "The fact that it will be two women just is a reflection of the fact that we have so many capable, qualified women in the office."

NASA is hosting a media teleconference at 4:30 p.m. EDT today to discuss this week’s first all-female spacewalk at the International Space Station. Audio of the teleconference will stream live on the agency’s website.

Kenny Todd, manager of International Space Station Operations Integration, and Megan McArthur, deputy chief of NASA’s Astronaut Office, will talk to and take questions from media about recent changes to the agency’s spacewalk schedule and moving forward with efforts to upgrade the space station’s power system. 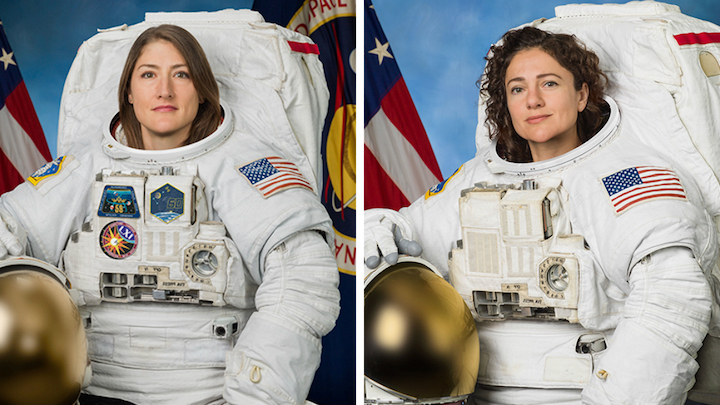 NASA astronauts Christina Koch and Jessica Meir will venture outside the space station at 7:50 a.m. Thursday, Oct. 17 or Friday, Oct. 18. Live coverage will begin at 6:30 a.m. on NASA Television and the agency’s website.

Space station managers have postponed three spacewalks previously scheduled for this and next week to install new batteries in order to first replace a faulty battery charge/discharge unit (BCDU). The BCDU failed to activate following the Oct. 11 installation of new lithium-ion batteries on the space station’s truss. The three spacewalks previously planned to continue the installation of additional lithium-ion batteries will be rescheduled.

The BCDU failure has not impacted station operations, safety of the crew, or the ongoing experiments aboard the orbiting laboratory, many in preparation for future human missions to the Moon and Mars. The station’s overall power supply, which is fed by four sets of batteries and solar arrays, remains sufficient for all operations. However, the faulty power unit does prevent a set of batteries installed earlier this month from providing increased station power.

The BCDU’s regulate the amount of charge put into the batteries that collect energy from the station’s solar arrays to power station systems during periods when the station orbits during nighttime passes around Earth. Two other charge/discharge units on the affected 2B power channel did activate as planned and are providing power to station systems.

This will be Koch’s fourth spacewalk and Meir’s first. Watch video of the two discussing the possibility of conducting a spacewalk together at:https://youtu.be/2o4XMOj2zzY?t=1113 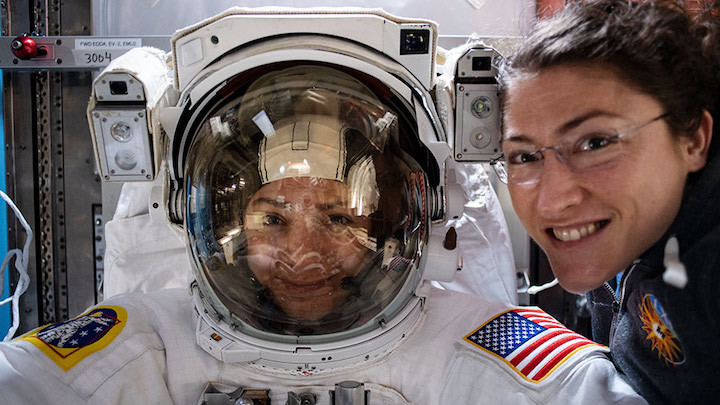 Science experiments continue aboard the International Space Stationas two NASA astronauts prepare for their first spacewalk together, which is set to take place Friday. The Expedition 61 crew researched a variety of space phenomena today and reviewed procedures for tomorrow’s excursion.

Flight Engineers Christina Koch and Jessica Meir will venture out into the vacuum of space on Friday to replace a failed power controller, also known as a battery charge-discharge unit (BCDU). The BCDU regulates the charge to the batteries that collect and distribute solar power to the orbiting lab’s systems. They will set their spacesuits to battery power around 7:50 a.m. EDT and exit the Quest airlock for the 5.5-hour repair job on the Port 6 truss structure. NASA TV begins its live coverage at 6:30 a.m.

Commander Luca Parmitano of the European Space Agency (ESA) and NASA Flight Engineer Andrew Morgan will assist the spacewalkers. Parmitano will control the Canadarm2 robotics arm and Morgan will provide airlock and spacesuit support. All four astronauts gathered together today for a final procedures review.

In the midst of the spacewalk preparations, the crew continued ongoing microgravity science. The astronauts had time set aside today for researching cancer therapies, DNA sequencing, planetary robotics and space agriculture.

Morgan set up protein crystals critical to tumor growth and survivalin a microscope for observation and photography. Koch continued exploring the viability of sequencing microbial DNA in microgravity.

Parmitano is readying hardware that will enable an astronaut on the station to control a robot on the Earth’s surface. Future astronauts could use the robotic technology to explore a planetary surface such as the Moon or Mars while orbiting in a spacecraft. 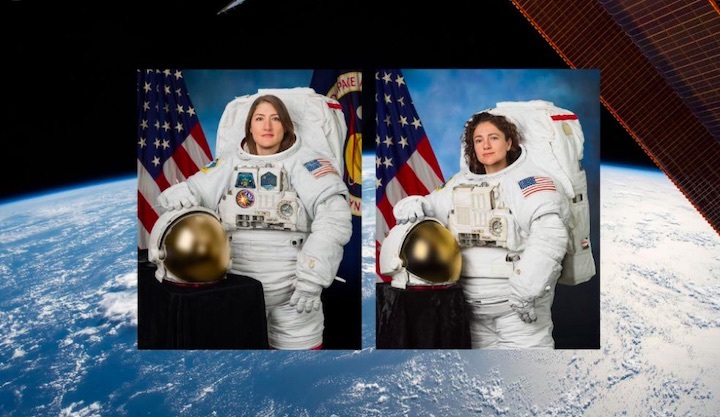 The crew is also in the second week of growing a crop of Mizuna mustard greens. Meir watered the Mizuna plants today for the ongoing space agriculture study to learn how to provide fresh food to space crews.

Cosmonauts Alexander Skvortsov and Oleg Skripochka had their own slate of human research to conduct today. The duo studied cardiac output changes and blood flow regulation including the effects of space on enzymes.