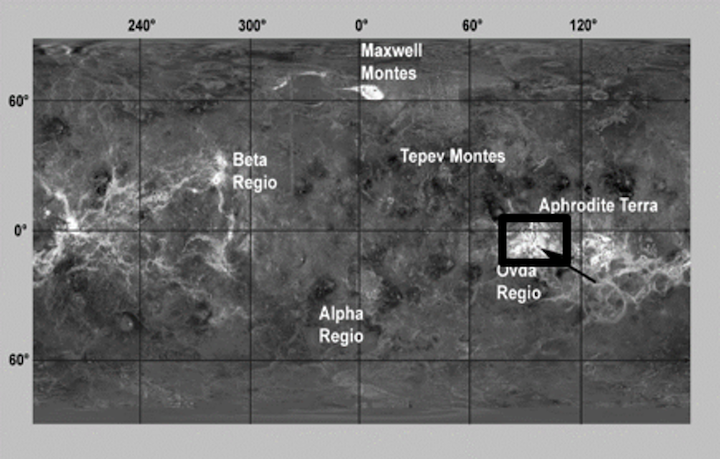 A lava flow on Venus once believed to have been formed under wet conditions early in the planet’s history was actually formed under dry conditions, scientists say.

Not that this means there wasn’t water on the early Venus. But it does mean that this lava flow, once believed to be evidence for water, is not, says Allan Treiman, a geologist at the Lunar and Planetary Institute in Houston, Texas.

The flow, called Ovda Fluctus, sprawls across several thousand square kilometres near the Venusian equator. It was discovered by NASA’s Magellan spacecraft, which orbited Venus from 1990 to 1994 and used radar to map the cloud-covered planet’s surface to a resolution of up to 75 metres.

“That’s the best data we have,” Treiman says. But re-examination of it suggests that Ovda Fluctus isn’t made up of granitic lava, as was previously believed, but is instead made of basalt.

That’s important because granitic lavas, such as rhyolites, which are common on earthly volcanoes, are indicators that the magma that formed them was rich in water.

Not so for basalt. “That’s what you get if there’s almost no water, or very little water,” Treiman says.

Radar mapping can’t tell directly what type of rock a lava flow is made of, but it can show details of the flow’s shape.

In particular, it can map its edges, allowing scientists to see how the lava moved in the last meters before it solidified. “The margins of lava flows look like fractal curves,” Treiman says. “The fractal dimensions for basalt are different from rhyolite.”

Rhyolite and other granitic lavas, he adds, are “thick, really viscous,” oozing and spreading more-or-less evenly, “like bread dough”.

Basaltic lavas are runnier, “sort of like heavy motor oil. They tend to make much more complicated edges.”

Previous studies of Ovda Fluctus had been done by eyeball and had concluded that its flow pattern looked like that from a water-rich granitic lava.

Treiman’s team, which included an undergraduate student intern, Frank Wroblewski of Northland College, Ashland, Wisconsin, re-examined the margins mathematically and came to the opposite conclusion: “[They] were consistent with basaltic lava and not granitic lava,” Treiman says.

Not that this proves the young Venus didn’t have water. After all, Earth has a lot of water, and plenty of its lava flows are basaltic.

“It’s an excellent study, but I’m not sure of its broader implications,” says Venus researcher Michael Way of NASA’s Goddard Institute for Space Studies in New York City, who was not part of the study team.

All that it shows, he says, is “that this particular region is not of granitic origin”.

Treiman doesn’t disagree. Most likely, he says, Venus does have granite – and therefore proof of water – elsewhere, most likely in a sprawling highland known as Ishtar Terra, roughly the size of Australia. “Personally, I think there’s a lot of it,” he says.

And if the early Venus really did have water, he says, it could well have had life, because billions of years ago, when the Sun was dimmer and cooler, Venus might have been more habitable than the Earth. “There’s no obvious reason life couldn’t have evolved then,” he says.

To find out, he says, what’s needed is to return to Venus and send a lander to Ishtar Terra, to “tell us whether it’s granite or not”.

But, he admits, that’s not likely to happen soon. Ishtar Terra’s terrain is very rugged, he says, and “the engineers who do the landings [would] have a heart attack.”