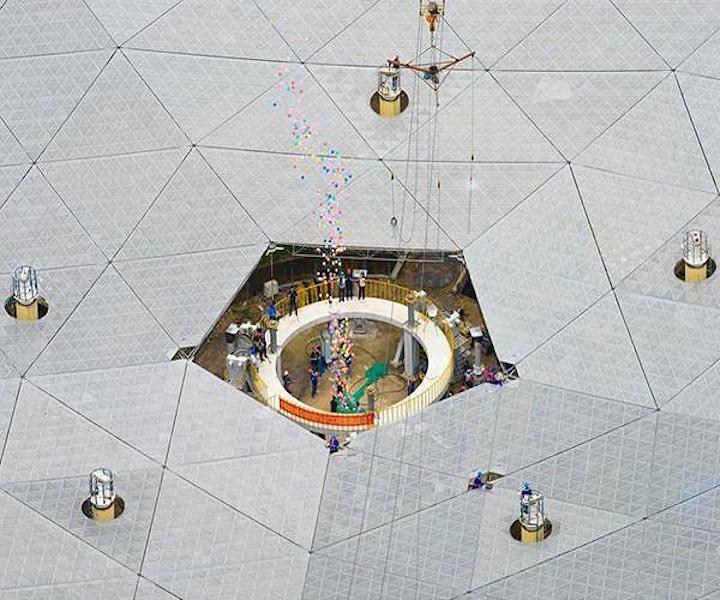 For more than a month, Chinese scientists have been studying mysterious fast radio bursts coming from space. China's Five-hundred-meter Aperture Spherical Radio Telescope (FAST), the world's largest radio telescope, has now picked up more of these radio pulses that have baffled astronomers for more than a decade.

Chinese astrophysicists studying fast radio bursts or FRBs have reported dozens of new signals. A mysterious radio pulse, known as the FRB121102, was first detected by FAST in August, and since then the signals have periodically reappeared. FRB121102 was already known to scientists and was first picked up in 2012 at the Arecibo Observatory in Puerto Rico and then again in 2015.

But what are these fast radio bursts and why are they so difficult to study?

The first fast radio bursts were picked up in 2001, Yongfeng Huang, a professor at the School of Astronomy and Space Sciences of Nanjing University, said.

"Back in 2001, when astronomers were analysing archival data recorded by radio telescopes, they suddenly came across the strange phenomenon, when for a short time, the telescopes detected very powerful wave bursts. Although their duration was only one-thousandth of a second, they were of extreme intensity," Prof. Huang explains.

But it wasn't until 2007 that FRBs were first discovered. "They were called fast radio bursts. In other words, these are unidentified radio wave pulses coming from the depths of space," the scholar added.

FRBs are hard to track, and scientists disagree on the nature and origin of these signals.

"Previously, people were unaware of these phenomena. Even astronomers could not explain their nature. At first, it was believed that this is interference caused by radiation from our planet, but then Australian scientists in the course of research found that the source of the radio bursts is located somewhere in space," Prof. Huang said.

Among the hypotheses on their origin, there was a version postulating the alien nature of the signals. However, there is still no definitive answer, and in 2010, signals from the Earth were mistaken for FRB.

"Some authoritative scientists believe that the bursts may well come from the solar engines of extraterrestrial civilisations. However, not many astronomers adhere to that theory," the Chinese professor stated.

At the moment, it's hard to pinpoint the source of these rapid pulses of energy. According to Prof. Huang, it will take a lot of time to establish it:

"I, like many astronomers, believe these bursts have only been known to science for ten years - this is a very short time in astronomy. Besides, tracking and studying these FRBs is quite difficult, as they occur and disappear extremely quickly, while seldom appearing in the same place. We can only observe their radiation backgrounds without the ability to study other parameters. Therefore, we won't be able to establish the source of these bursts soon. At least not earlier than 10-20 years from now."

In 2019, scientists spotted another pulse from FRB121102 on 30 August. After that, the telescope recorded dozens of repeating signals from the FBR over several days. On 3 September alone, there were more than 20 pulses detected. But the number of FRBs detected so far it still too small to make any conclusions the scholar said.

"In all that time, astronomers have detected about a hundred such bursts. Most of them did not occur where they were previously detected. Therefore, it is difficult to determine the source of the phenomenon."

Studying them is also not easy because these bursts are almost impossible to locate due to the nature of their appearances.

"According to the roughest estimates, there are about 10,000 of them daily, but our telescopes do not record them in such numbers. The most curious thing is that we can't say if there is any connection between the detected bursts since we are not able to track them for a sufficiently long period. In any case, repeated fast radio bursts once again confirm that this is not radio interference from Earth, but something reaching to us from outer space," Prof. Huang concludes.