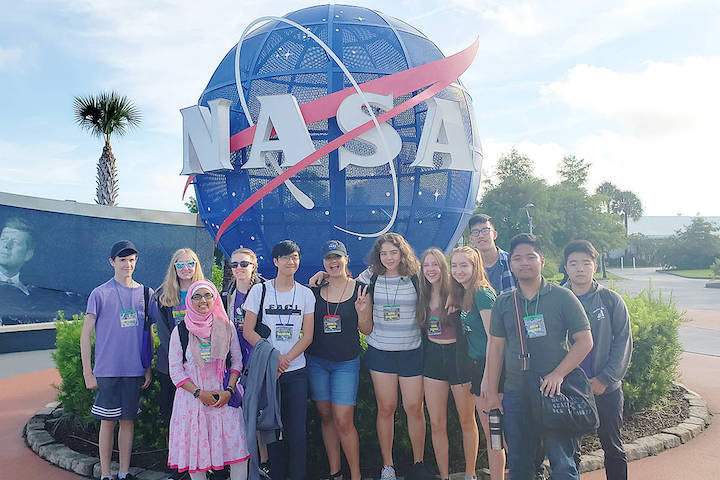 Some of the high school students who made up the Canadian team at this year’s International Space Settlement Design Competition, held at NASA’s Kennedy Space Center in Florida in July. (Photo submitted)

Imagine designing a city in space. Several local high school students did just that and have returned home after helping their team win a NASA-backed contest that involved designing a habitable space colony.

The International Space Settlement Design Competition was held at NASA’s Kennedy Space Center in Florida from July 26 to 30.

“It was intense,” laughed Aden Jabbar, who is starting Grade 12 at Surrey’s Princess Margaret Secondary this fall.

She was one of roughly 20 Metro Vancouver students – about half of whom are from Surrey – who participated in the annual competition.

“We were treated like actual engineers,” said Aden, who is in a NASA club at her high school. “The judges, they were questioning us like we were real engineers proposing a real design. It’s stressful.”

As for the win?

”I was so shocked. I was like, ‘How is this even possible?’” said Aden, chuckling. “After doing this I feel like I’m more interested in pursuing a degree in engineering because this has given me a real life experience of actually working in the field. Actually designing proposals for real companies. It was really cool.”

The competitors – from around the globe – were split into “companies” and tasked with designing, developing and planning operations for “the second large space settlement on Earth’s Moon Luna” in the year 2059. It was dubbed the “Balderol.”

According to their “settlement contract,” the colony had to be a safe living and working environment for a minimum of 16,000 full-time residents.

From infrastructure to safety to automation to costing and even a schedule for construction, the teens had their work cut out for them and were even assigned roles in the company’s hierarchy. The competition involved not only the design and planning phase, but also a presentation to judges and an audience of at least a couple hundred.

The Metro Vancouver students were teamed up with other teens from the U.S., a team from India as well as a team from Uruguay.

In all, about 60 students from the four countries worked on the winning space colony design, meaning about a third of the victorious team were Canadians.

Alvina Gakhokidze, who is entering Grade 12 at Delta’s Seaquam Secondary in September, was in the structural engineering section, helping to design actual buildings.

“My heart was pounding so loudly,” Alvina recalled of the moment before the team found out they’d won. “In the last few seconds I just covered my eyes. It was torture. Then she finally revealed it, there was this whole video of everyone jumping. We all went on stage and got medals. Then we got these big trophies, rocket trophies.”

Alvina said she never would’ve guessed she’d be in a contest that involved designing a space settlement. “Now I want to be an aerospace engineer,” she said. “Oh, how things change.” 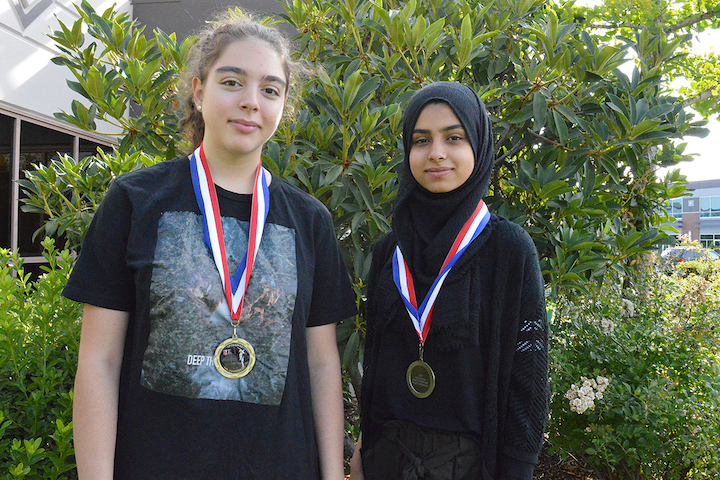 (Alvina Gakhokidze, left, and Aden Jabbar are two of several local high school students who were part of a winning space colony design competition in the U.S. in July. Photo: Amy Reid)

Another student from Princess Margaret’s NASA club, Mehtab Brar, said it was great to “encounter real people from the industry.”

“Engineers, contractors, the organizer herself, she also works with NASA. That was a really good way to network with the industry and the people there…. It was an opportunity to expand on some of the stuff I had already learned.”

Mehtab said about 10 students from Princess Margaret competed, in all.

Sahba El-Shawa, who served as the Canadian team’s adult lead and engineer, explained this was the first year the country has officially participated in the event since its inception in the 80s.

“Previously, the only way Canadians could participate was through a qualifying competition, so instead of having their country’s semifinals, you’d have to write a 40-page proposal over a couple of months, and only three teams get chosen from around the world,” she said, noting that made the chance of being accepted very slim.

“This was the first year Canada was guaranteed a spot.”

El-Shawa organized the national semi-final that served as a qualifier for the first-ever Canadian spot at the competition, and that qualifying contest was held last May at UBC.

All participants are in high school, she noted, and while all came from the Metro Vancouver area this year, she hopes to expand the event and garner more involvement from students across the country in future years.

“It’s pretty awesome,” El-Shawa said of the whole experience, as well as the opportunity the students had, noting real NASA engineers provided support to the Canadian students.

“You literally have people who work on these projects in real life to give you advice.

El-Shawa, who is about to embark on her masters in space studies, said the whole experience was “overwhelming” for her.

“The trophy that we won, the Saturn V, is the rocket they launched on. It was all very surreal. It was amazing.” 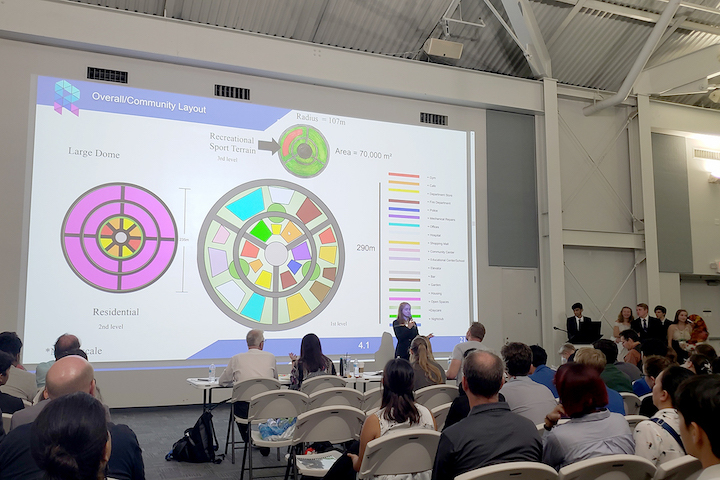 (Submitted photo of the students preparing for the International Space Settlement Design Competition, held at NASA’s Kennedy Space Center in Florida from July 26 to 30.)